I started on the dash replacement yesterday. My original dash had some major cracks. Too big to fix (although I tried ). CoupeKing recovered a stock dash for me. It looks great and was less expensive than a NOS one or even a good used one.

I removed the old one today... 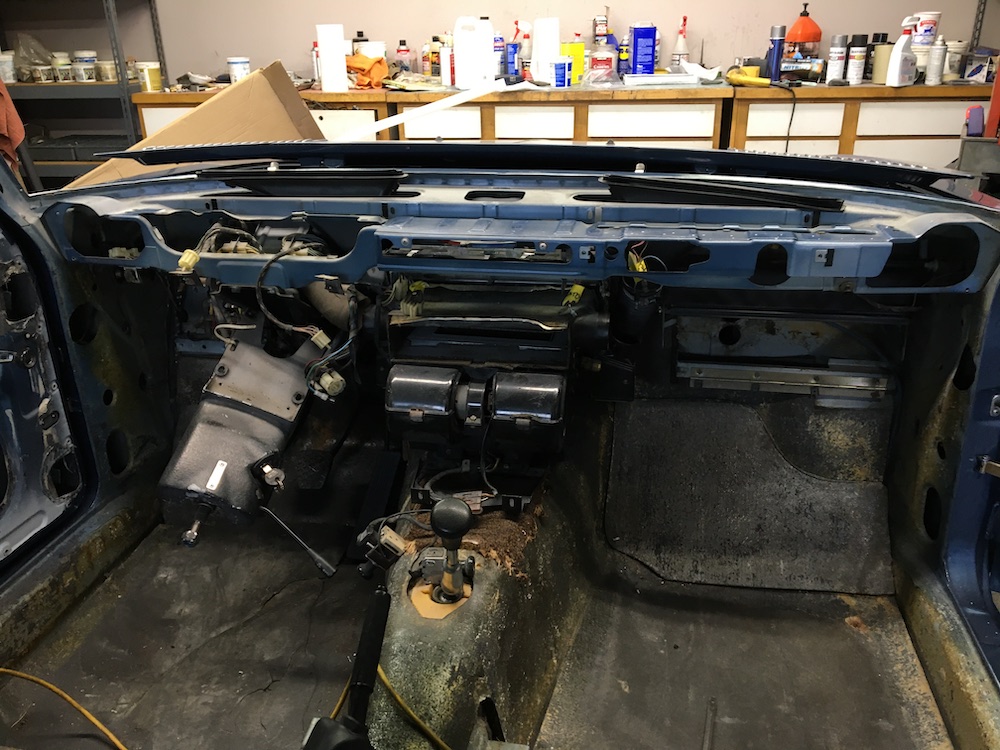 I was pleasantly surprised that it wasn't the PITA I thought it would be. Everything was fairly intuitive. The exception might be the defroster vents. The outboard ends of the vents slide into clips in the dash. It took me a while to realize this. Wiring was fairly straighforward. I took some pictures and notes and labeled some wires so I don't think it will be tough putting the wires back in the right spots. It is great that all the heater controls stay in place. It would have been a real can of worms to R and R all those cables. I think I was right at an hour from start to finish.

My next step is to insure everything fits in the new, recovered dash before I install it. So far, the trim plate over the heater controls is a tight fit due to the thickness of the recovering. I'll work on that tomorrow and report back.

E3 wiring is much simpler as there are more plugs that just unplug.

I test fit the parts from my old dash into the newly recovered one today. Some vinyl trimming with a razor knife needed and a liberal dose of Ruglyde required to get the instrument cluster to fully seat. In the end, everything fit. I'll try installing it tomorrow... 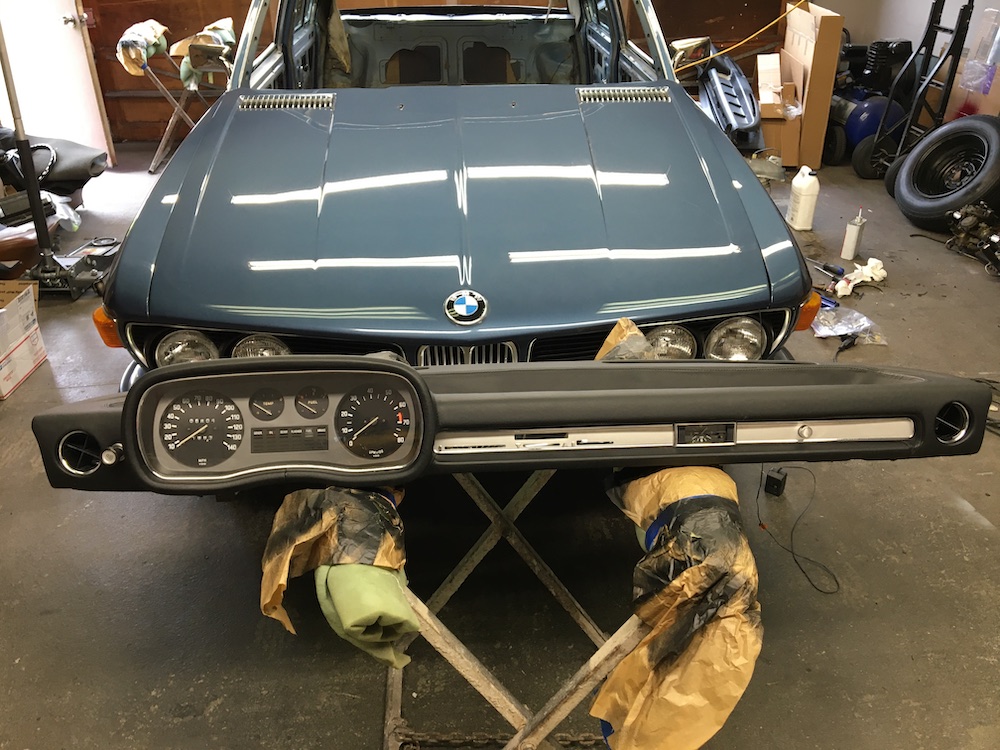 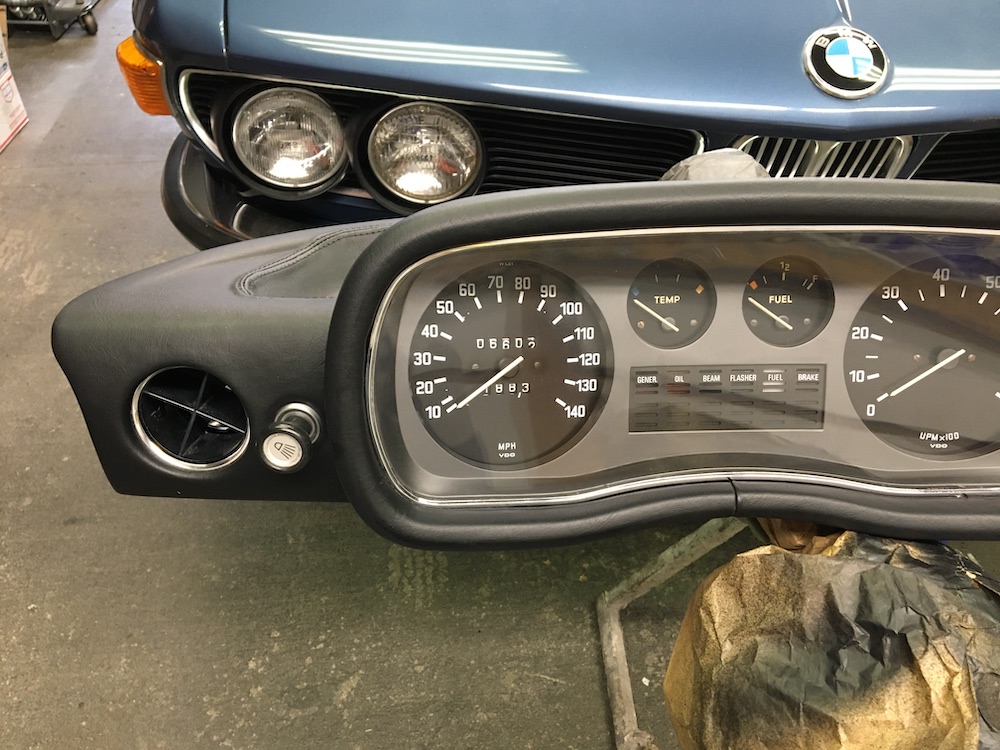 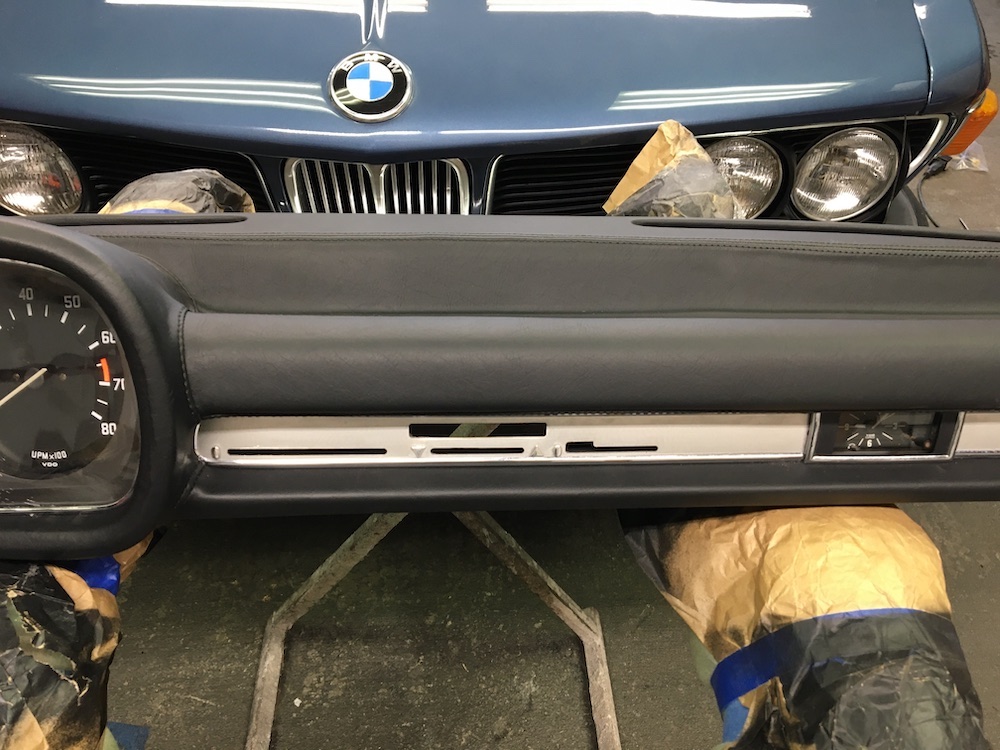 For the purists, the ribs in the right part of the dash have gone away. I think it would be too complicated to leave them in during the recovery process... 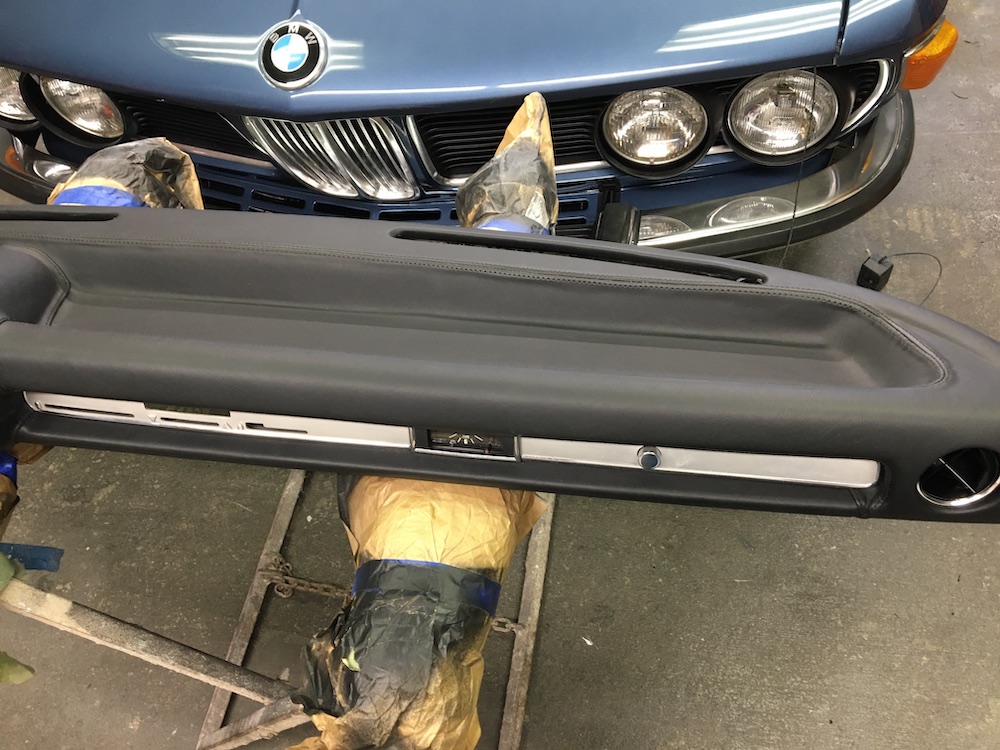 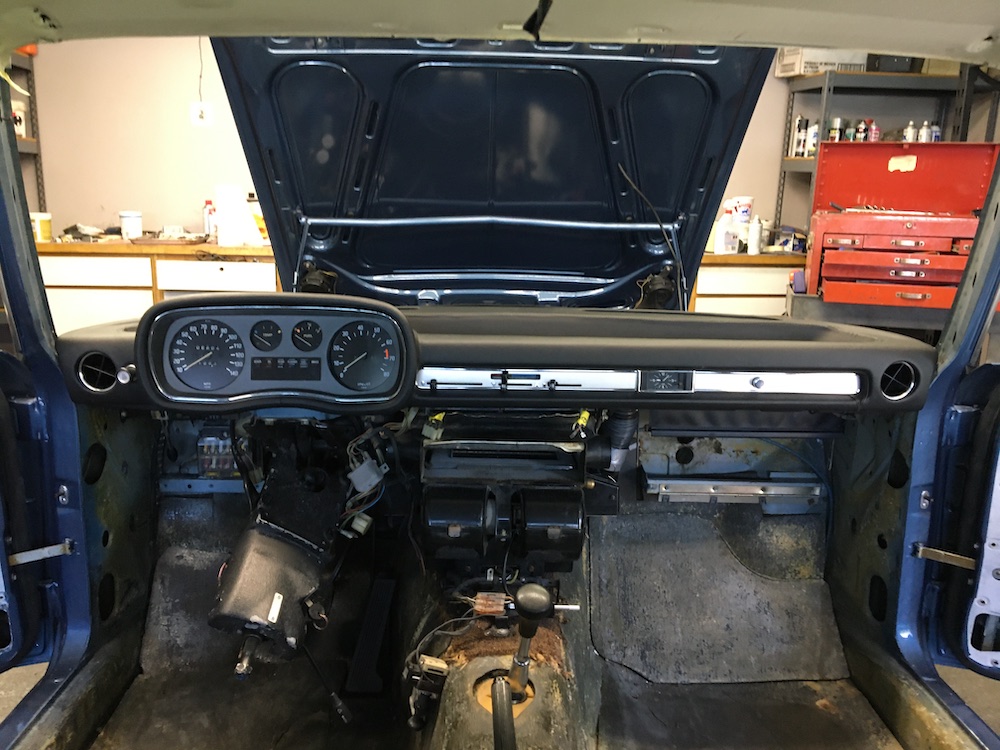 Of course I still need to install everything below the dash. Those parts and pieces will need to be detailed/painted first and won't go back in until the carpet kit is installed.

My takeaway in the dash R and R is that it isn't as tough as I imagined. Also, the recover done by Peter's crew is outstanding and a good alternative to putting up with a cracked dash or affording one of the few NOS ones remaining.
B

Well I learned a bunch of stuff here including Ruglyde that I never heard of...............assume better than soapy water. This is turning out great. You may have been jealous of my Bav when I posted pics and you were just starting, I am now feeling that for your Bav.

BTW This may sound crazy but I covered my rubber foam floor padding with ice and water shield. It added no thickness and just strengthens the whole thing, stops the cracking etc. I do have to say yours are in much better condition than mine were.

Bob,
I learn from you and the others on this forum every day. I don't remember how we restored cars before forums like this one, populated with experts who have "been there and done that" and willing to share their knowledge...but for sure it was A LOT tougher. The same with parts...especially for cars like ours where parts and parts sources are few and far between. Thanks e9coupe.com!

Ruglyde is mainly used for tire mounting, but is great whenever you need a good rubber lubricant (installing radiator hoses, lubricating suspension bushings, etc). In the old days before Armorall, we used it to dress tires.

Another good rubber lubricant is P-80, I used it to replace the rubber door window guides which are very long and must be pushed down into the door. 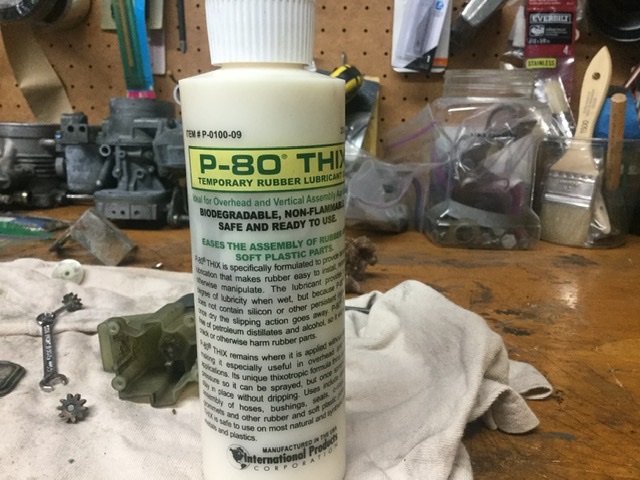 I did the same work today... 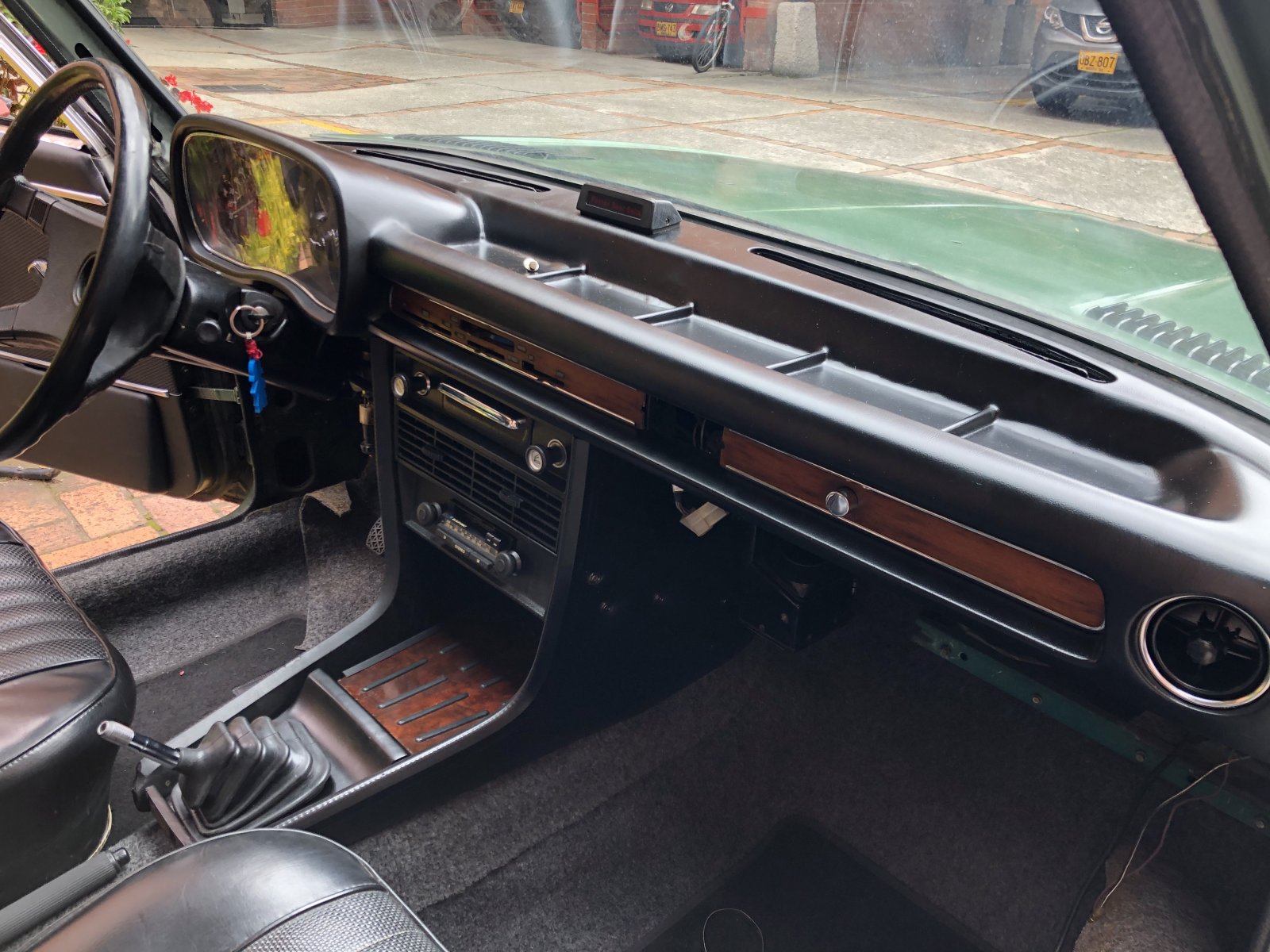 I like the aluminum look trim instead of the wood. How did you do that?

That's how the car was built. It is a very early 72 model year. Built 7/71 just after the change to the 3.0 motor. I believe the 2800 Bavs and the very early 3.0 ones had the brushed stainless trim on the dash and not the wood. Someone here that knows these cars better than I do can correct me if I am wrong.

Nice work and your efforts are helping me stay motivated with my 1/72 car with the wood dash trim.
D

Anyone know if the dash can be replaced without windshield removal?

What was the cost to have the dash reconditioned by Coupeking?

I hesitate to say what CoupKing charged me. I bought several items from him at the same time and I think my dash might have been a prototype for him. I have seen his recovered E3 dashes on eBay but for more than I paid. Send Peter an email

I did mine with the windshield out, but I don't think that is necessary. You'll need one of these... 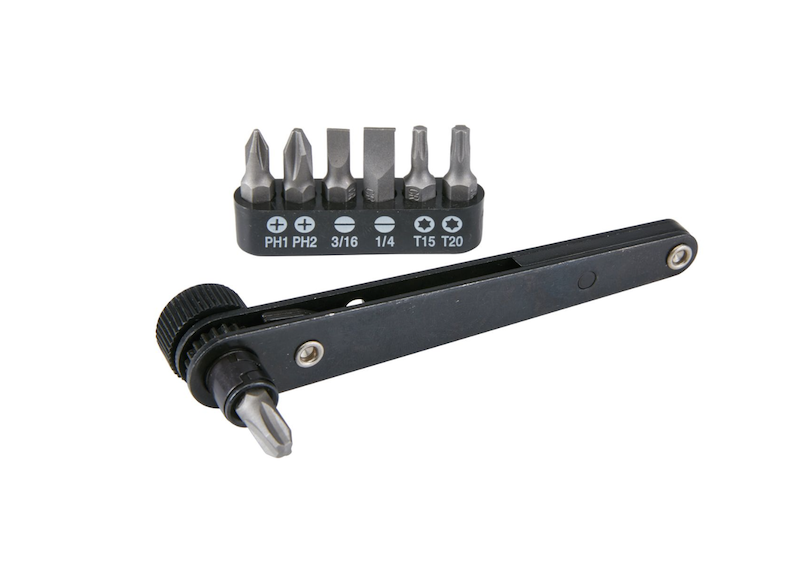 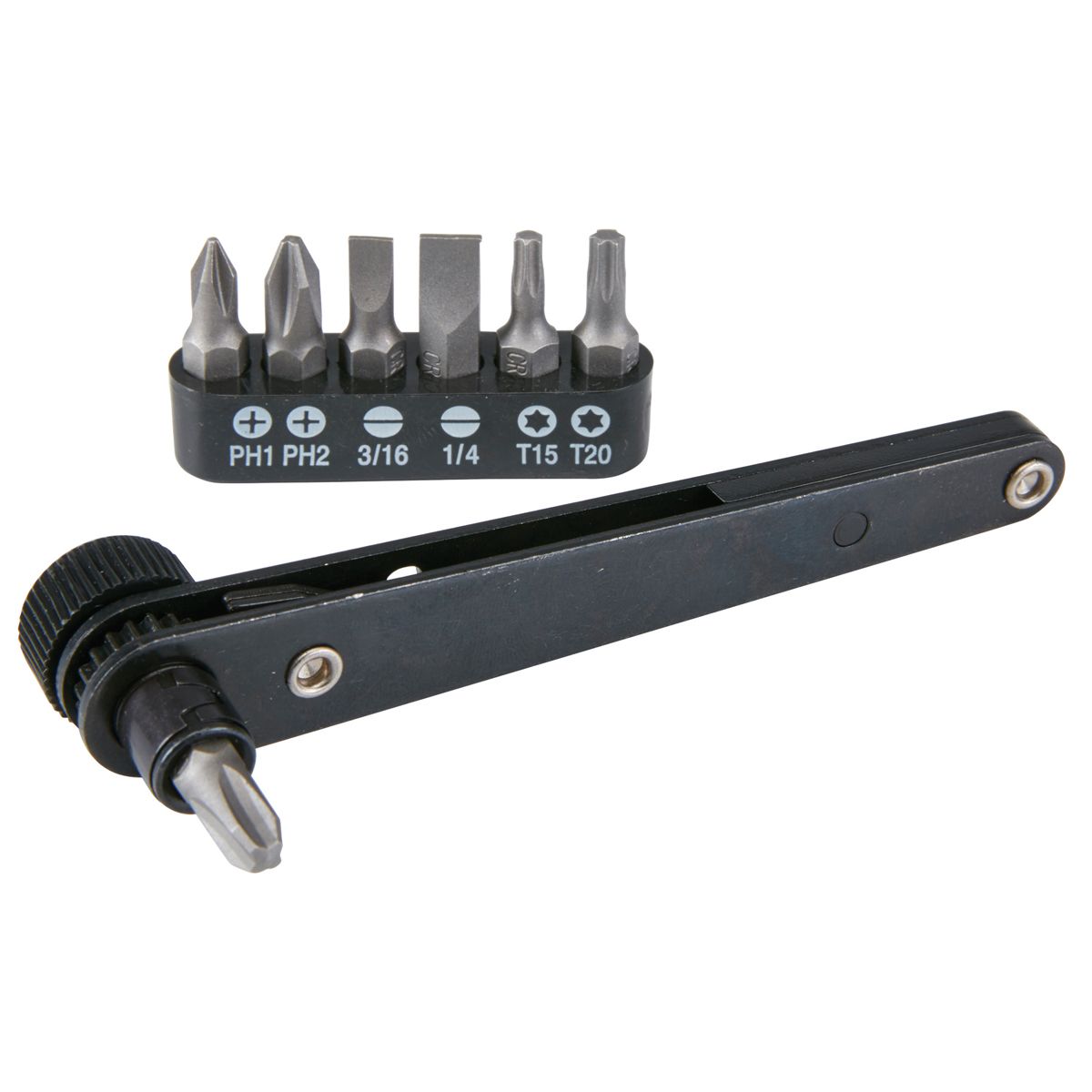 Dowst said:
Anyone know if the dash can be replaced without windshield removal?

What was the cost to have the dash reconditioned by Coupeking?
Click to expand...

The dash has 5 screws, if I remember correctly 2 are very complicated to remove...so I take off my old dashboard without removing those screws...the new one is not installed correctly until the windshield is removed...