Hello from Estonia, Europe. I am a fresh owner of two E9-s. Yes, two . Both of them are projects that need a lot of work as the previous owners did not finish the restorations and I bought them as-is. Bodies stripped and parts in boxes. The reason for posting here is to have a log book of work done and get ideas from you guys. I am going to be mostly supervising the project work, as I do not have the skills nor time/place to do this myself, but am good at finding parts etc.

One is a Polaris Silver 3.0CSA with blue cloth interior. Comes with some extra body and interior parts the previous owner collected and should be complete - number 4320336 from 30/10/1974. A Switzerland car that was brought to Netherlands in 2005, driven only by the new owner some 100km and then taken apart for paint restoration. Some of the work was done, but not very well as the pictures show and then everything left for basically 10 years. Sitting in a old warehouse until found by me on one of the forums. Car/parts are due to arrive in Estonia mid January next year. 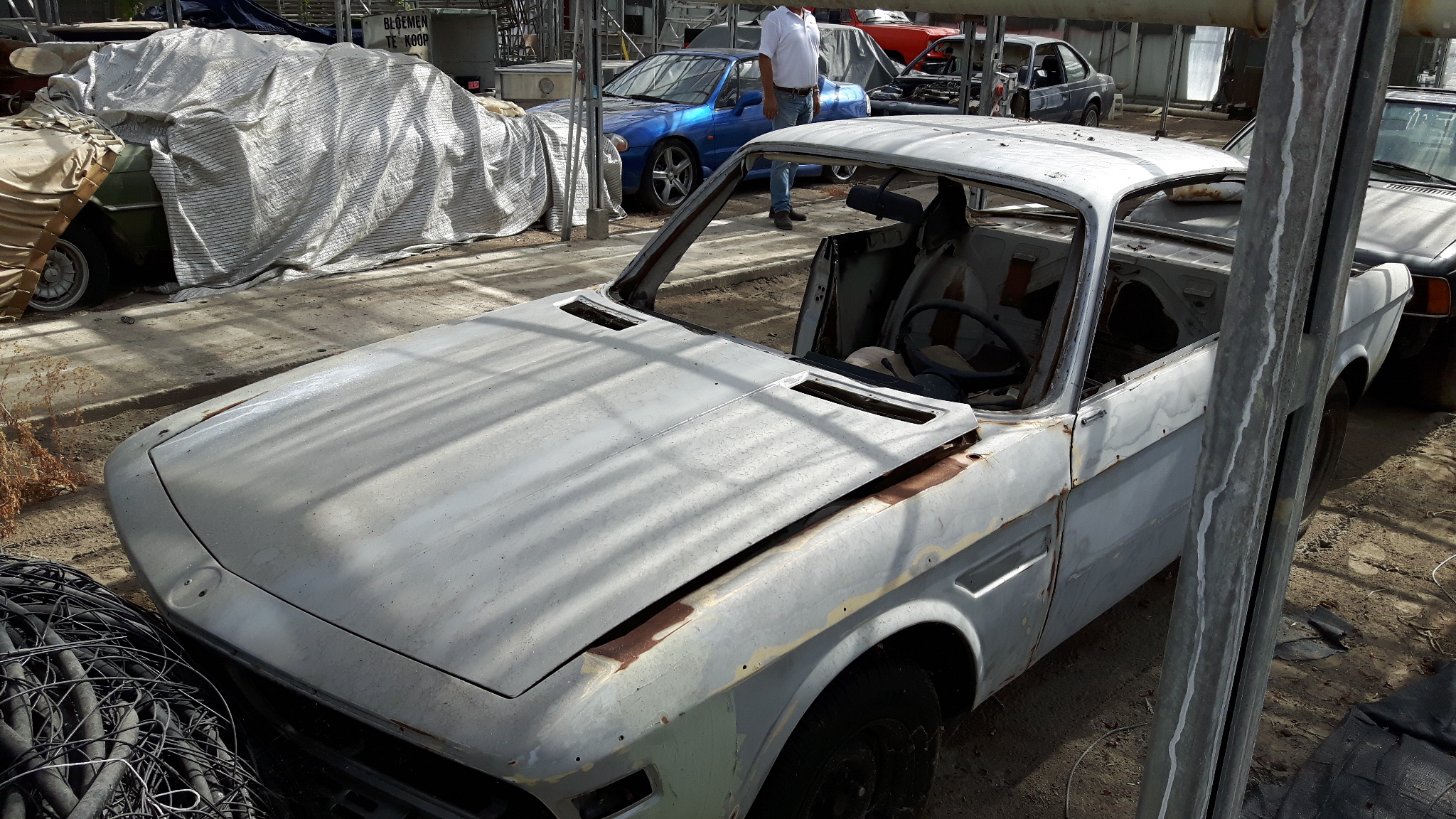 The second one, a quite rare original Inca Orange with blue cloth interior, a 3.0CS that has been converted to L-jetronic CSI with 5-speed, probably from E24 or E23 - number 4300093 from 30/01/1974. Comes with a set of mixed parts interior wise and A LOT of the uninstalled new body panels are original from BMW. The original parts alone made me jump in for it even though the price was not cheap, not that I needed 2 project cars at once . It has power sunroof, mirrors and windows. History-wise it was owned and driven by an american stationed in Germany before the previous owner bought it as a not-running project some 10 years ago, ordered a lot of parts and started the body restoration, which is done quite well but left unfinished. Car and parts will be picked up tomorrow and will arrive in Estonia just after holidays. 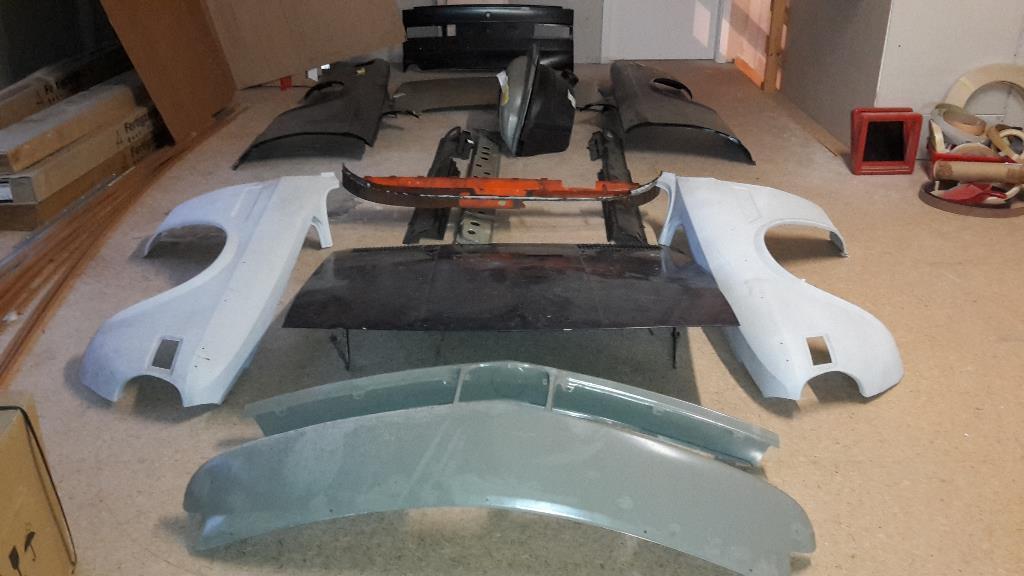 More photots of the the cars can be found here, some older, some as-is: https://www.dropbox.com/sh/58hvzxaio3h2qkj/AABwIg8ZvEpyp1yV3p1C7uVqa?dl=0

I have not fully decided what to start with, nor the exact outcome of the cars. A true from scratch, bare metal body restoration for both of course, but... Some thoughts, please chime in! I have a few months until my body guy is able to start, so have time to organize the parts and order new ones + make more detailed plans.

The Polaris car would be a good candidate for almost daily driving, at least in good weather and sundays. Keep original paint color, maybe change the cloth interior to black leather. Install the CSI engine from the Inca and a newer 4HP-22 gearbox. 17" BBS RS/RC, a bit lowered, no front bumper, add a Alpina chin spoiler instead and basically that is it. Engine wise, of course some 150-200kw would be appealing for this one too.

The Inca, with its rather outrageous color, could be a good candidate for a CSL tribute car. I am not thinking in terms of batmobile or group 2 or 5 bodykit, but rather a E9 with a S38B35, M88/3, ALPINA B6 3.5 or similar engine, CSL trunk spoiler, CSL front seats etc street car. The minus on this idea is the sunroof and with all the original metal parts to be put on, I am not going to make it a lightweight... Maybe with fiberglass body panels if I can source these in original form. Most probably will end up selling it later on, I do not think I need 2 E9s in a long run (if I do not build a warehous for all my stuff and cars*) and so should think in terms of what appeals to a potential average buyer later on too.

This thread has been quiet so let me just say Welcome! Way to enter the forum in style.

Wow, you got some really rare, expensive parts for that project.

Can't wait to see some progress! Going to be awesome!

The Inca arrived today! As a bonus it came with a 5-speed dogleg 260/5, which I believe is not going to work together with the speedometer as it has no speed cable... any advice to sort this?

There should be a plug at the same location where the speedo drive is on an early 265 or a 4 speed. You'll need to remove the plug and insert a speedo drive from another gearbox. You will also need to check if there is a drive gear mounted on the output shaft that will turn the speedo mechanism. Some later gearboxes retained the gear otherwise you'll have to open the back of the gearbox and instal a gear from another gearbox. Make sure you seal it up properly if you do open it.

OCCoupe said:
There should be a plug at the same location where the speedo drive is on an early 265 or a 4 speed. You'll need to remove the plug and insert a speedo drive from another gearbox. You will also need to check if there is a drive gear mounted on the output shaft that will turn the speedo mechanism. Some later gearboxes retained the gear otherwise you'll have to open the back of the gearbox and instal a gear from another gearbox. Make sure you seal it up properly if you do open it.
Click to expand...

Can you maybe direct me to a photo with the speedo drive/plug placement so I can compare?

I found this on bmwfans...

xjan99 said:
Can you maybe direct me to a photo with the speedo drive/plug placement so I can compare?

I found this on bmwfans...

Let me see if I can.

Here are two photos. One shows the speedo cable and the other shows a later gearbox that has the hole plugged with a freeze plug. The freeze plug can be removed and if your luck the gearbox will already have the drive gear on the output shaft. 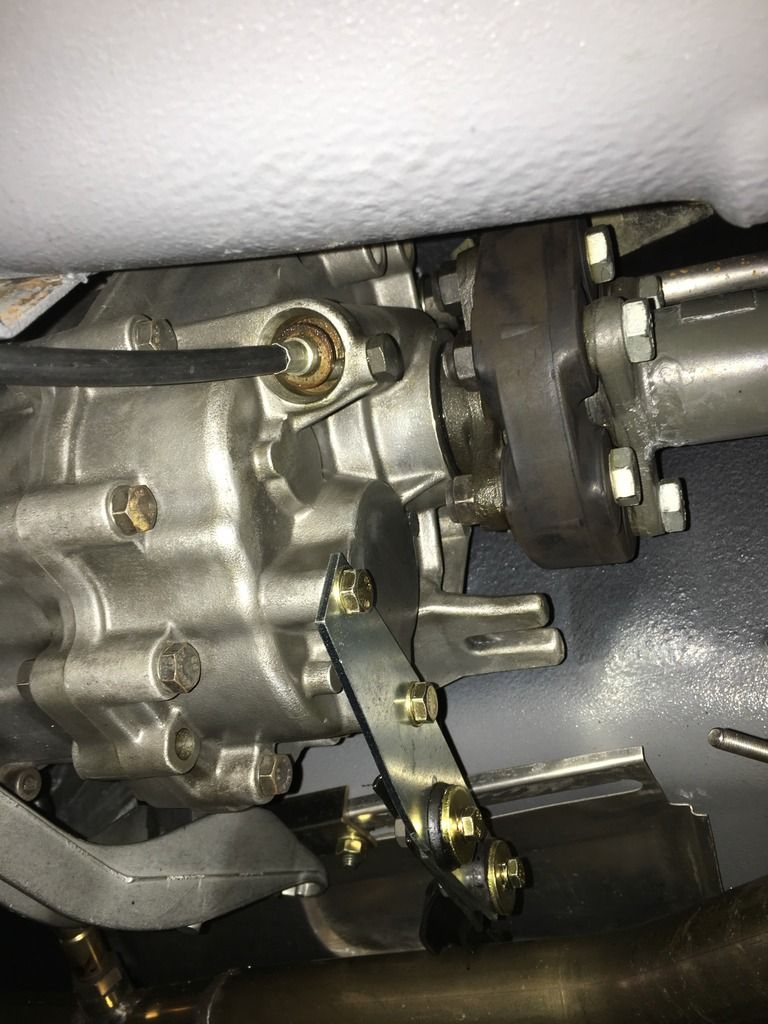 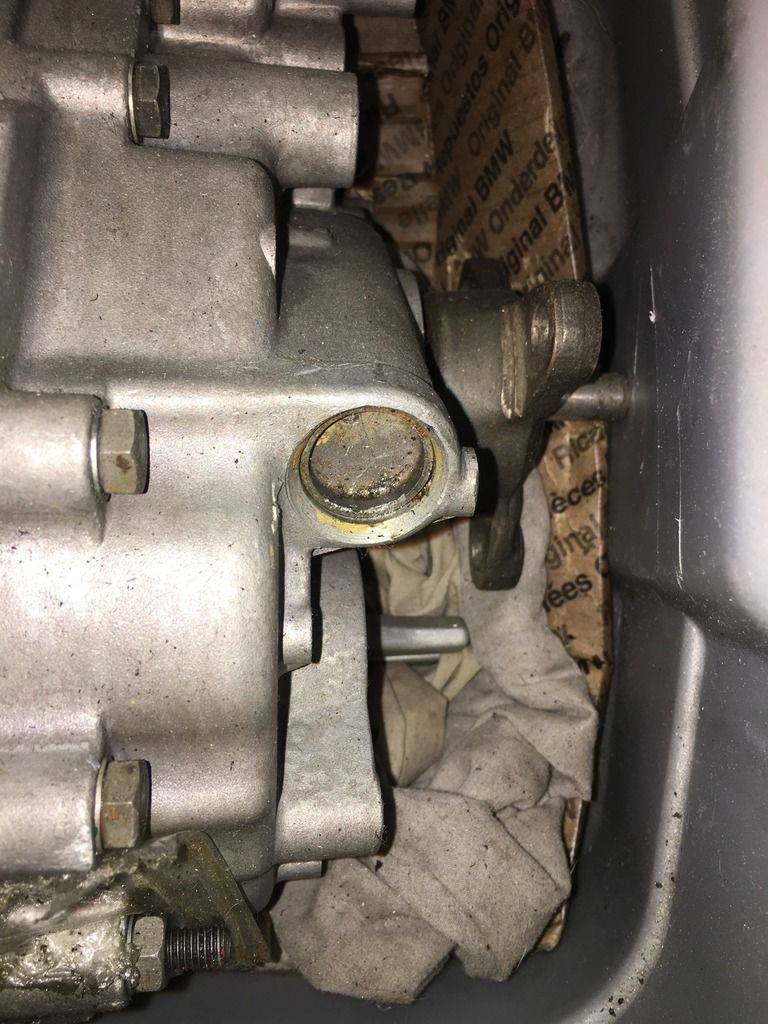 Thanks, I will inspect this! And the gearbox also came with a nice Alpina gearknob btw , seems period-correct and in great condition.

The interior carpet has a funky pattern I have not seen on other user's E9s. Is it original or aftermarket possibly? 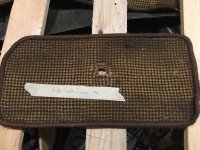 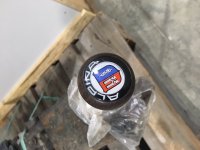 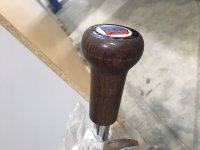 oh, I forgot... the CSL airdam too - although beaten and needs repairs it seems original BMW part also 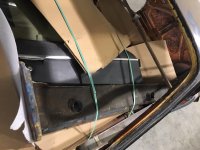 OK, the second car, Polaris, has also arrived in my temporary warehouse. It is time to meet up with my welder-painter and decide, which one to tackle and what becomes of it. Have not taken the time to pull all the parts out of boxes, but most importants stuff seems to be there.

I checked, the dogleg transmission has the speedo drive attachment, not a plug so this helps. I am leaning towards the Inka to be the first build with dogleg box and S38B35, as it does not have the matching numbers engine anyway. But the color, it screams racecar to me, rather than a cruiser so I really cannot make up my mind easily. A CSL or Alpina front spoiler, CSL wing arches and 17"s with lowered suspension... also the ducktail trunk spoiler. Or.. go Heidegger style fenders even?

Polaris car could get the L-jet engine upgrade, but otherwise would be stock. Future value wise, I could keep the original engine, although does not make a lot of sence - the CSA is not a CSL I would think in terms of having to keep it 100% original.

3 years have passed, have not started the projects. Got divorced and then married again, new kid coming in spring. These might be up for sale (cars I mean, ).
S38B35 also still waiting https://www.dropbox.com/home/Photos/S38
Last edited: Dec 9, 2019

Welcome! way to jump in- you'll be dreaming e9's for years with two projects, but it will totally be worth it.

Peter Coomaraswamy said:
Welcome! way to jump in- you'll be dreaming e9's for years with two projects, but it will totally be worth it.
Click to expand...

Yes, but your warehouse is a little messy!

Peter Coomaraswamy said:
Yes, but your warehouse is a little messy!
Click to expand...

I would sell one, which is your call of course, and build an original 3.0CSi. It the boat in the back a super rare BMW boat built to compete with Ferrari's boats? I believe the steering wheel is from a 507, 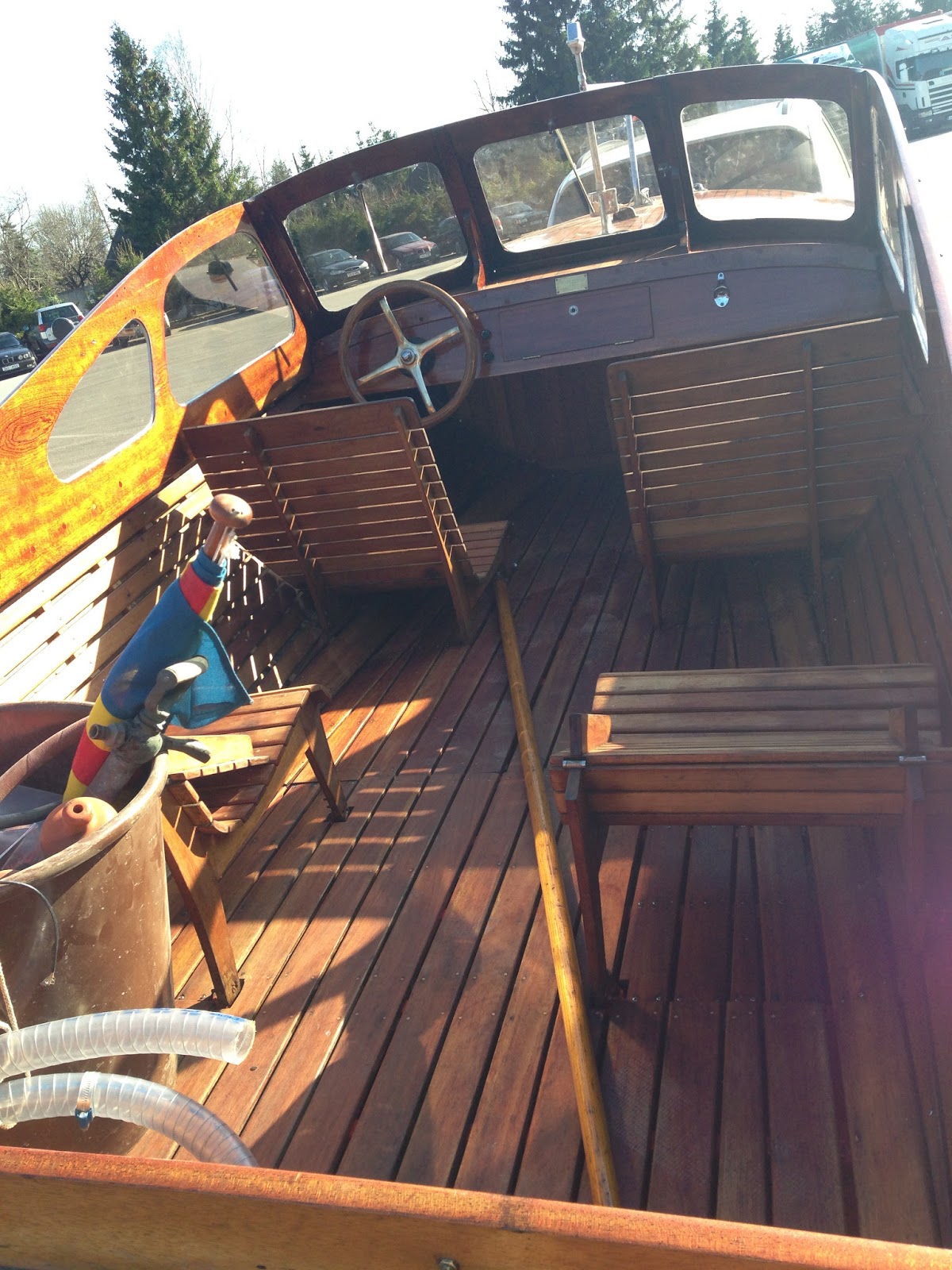 Polaris car is sold. Once my other projects are done (build a house and large garage + complete restoration of E30 M3 Convertible), I will turn my head to the Inka... It is such a beauty so has to be restored

So, I changed the thread title now and have a bit more to say, let's do it . Funny thing this covid-time, more and more time is spent on hobby projects as other entertainment options are cut short .

I have booked a time-slot at a workshop for the next possible time which is May 2021 to start with the metal work.

The outcome will be a original color (Inka) car with S38B35. I do not have the matching numbers engine on it (replace with a E32 injected M30 at some point), so I am installing the S38B35 with no hard feelings .

I have written to BMW Archive and got a confirmation, this car is factory original Inka from 1974, but no info about the full build list. I would like to know the interior materials that were used when it was new and other options - currently I have blue cloth front seats (new style) and tanned leather rears (old style), also an electric side mirror on the LH side, all electric windows, no AC and sunroof. Some items might have been changed over time.

After a closer inspection of the body and parts I already have, I have already made a few orders.
Huge amount of new (OEM and reproduction) panels are already here or coming from WN and Tloznia Blach.

The roof of this car has also been replaced at some point with an OEM part I think (black primer), also no more "deadly" foam insulation around the sunroof area.
Looking at the list of new body panels, hardly any old car left once it is done . Hood is salvagable most probably.