Dave was asking about my front seat belt setup which I happened to mention in a parts post, so I thought perhaps I should post details.

As background, this was not my idea. I copied it from Paul Cain's set up. Also this is not original. However, I was looking for a comfortable, safe three point set up when I restored my coupe. I tried the various late model setups first and found them lacking. While I think it a quite safe, I can't vouch for this.

I will post his is parts so I can explain the pictures as I go. The setup consists of an adjustable top loop that bolts to the roof. And a lower loop that connects to the top loop through a metal ring and is fastened to the coupe side rail seat belt bolt mounting on one end and connects to a retractor buried in the B pillar stub behind the trim panel in front of the lower rear seat. The lower loop slides through the ring when extended to fasten around your waist. 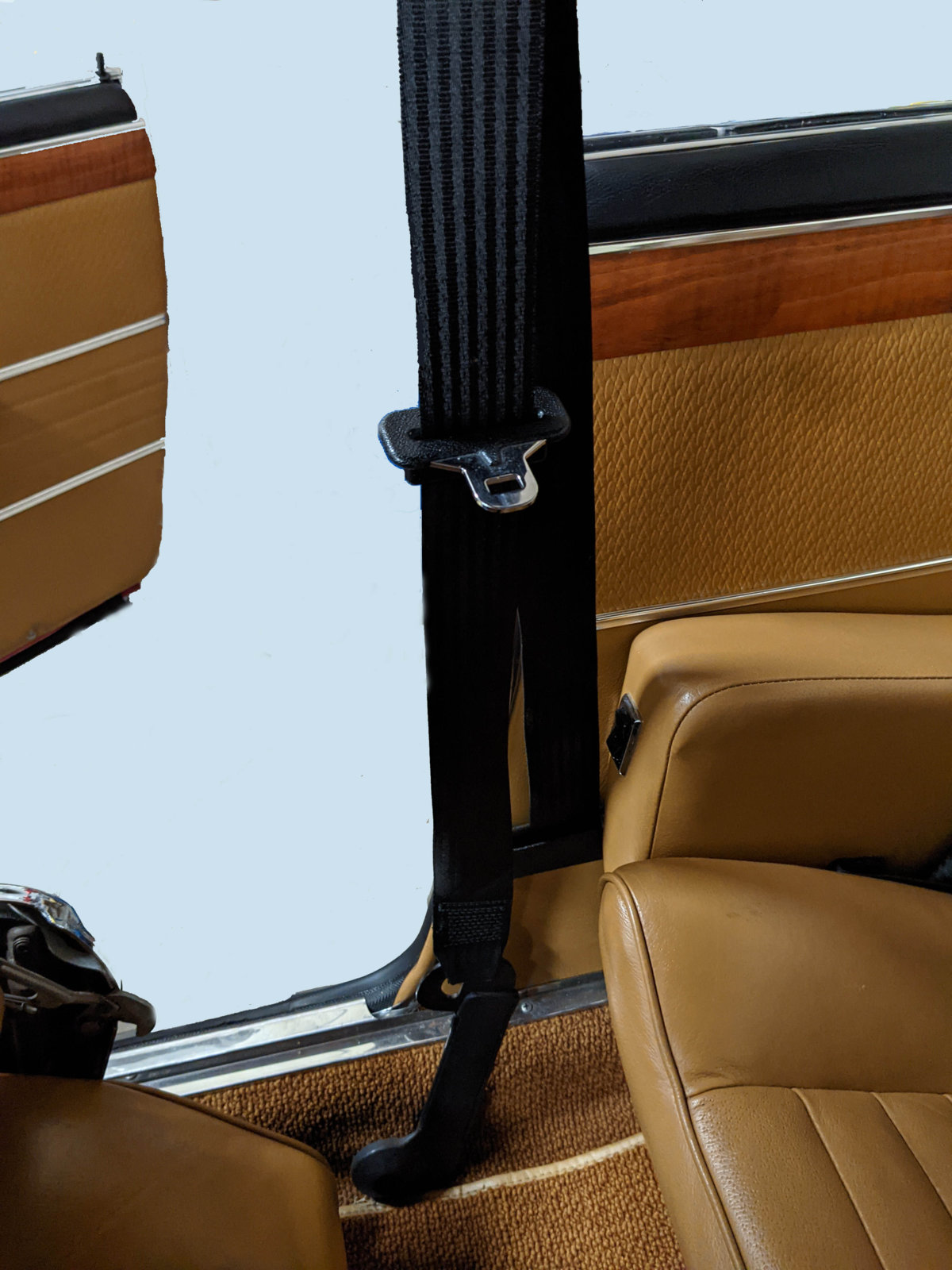 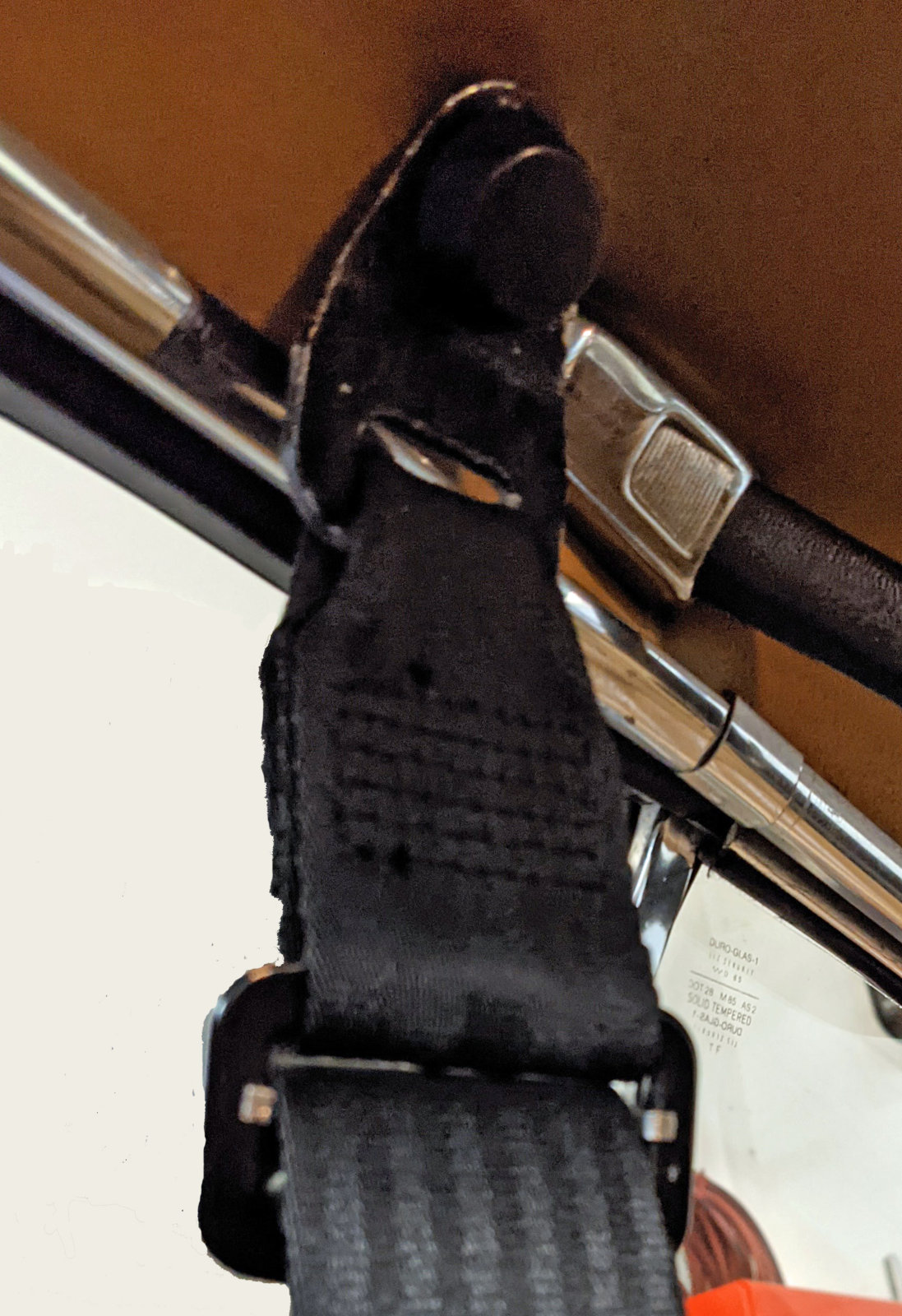 I made the top loop adjustable, as I recall because of the example I had seen although I am not sure this is necessary. I am 6' tall and best adjusted it is 9 inches from the bolt mounting to the slip ring. I think this length is a pretty good and might suffice as a fixed length. A shorter length might be needed in you are over 6' 4". My spouse is about 5' 8" and it is fine for her. However, if you are shorter, then a longer length might be better.

I sourced parts for this upper loop from a mid 80's center back seat from the 5 series, since it features the buckle which allows manual adjustment of the belt length.

I was told that the CS coupe never had a seat belt nut in the roof and that I would have to weld it in. However much to my surprise when I pulled the headliner back, there it was in my car from the factory. I guess this was a late change (my was made in 11/74). But I don't know what coupe model actually used that seat belt bolt. Mine was a Euro model.

Almost all of the other parts were sourced from the early 320i coupe. An example of these source parts is shown below. Here you see the retractor which is buried in the B pillar stub, the chrome slip ring and the dogleg that bolts to the coupe seat belt nut in the side rails (more on this later in the post).

The plastic cover around the belt is form a late 80's 3 series.

Underneath this trim panel I opened up the egg shaped opening just slightly to allow the retractor into the B pillar stub. I welded a steel angle plate to the outside of the Lower B Pillar and also the lower side rails. This is what the retractor is bolted to. I trimmed some material from the back of the trim panel to allow for the bolt head. I am not an engineer, but it seems very sturdy to me. I think you would have to to take out the B Pillar stub and part of the side rail for the belt to come loose in an accident. This is very similar to the actual mounting in a 320i

The dogleg has a plastic cover. After it is removed the bolt becomes visible. The dogleg spins in plastic bushings on a shoulder to the belt as shown below. It is motivated by a spring to rotate the belt to the rear when not in use to facilitate easy access to the rear seat. It also helps keep the the seat belt our of the door and out of the way.

The slip ring I used was from the 320i and is shown in the attached picture. I was able to grind out the weld to the right of the bolt hold, spread the mounting metal and separate it from the chrome ring. It was easy then to smooth the ring and slide both the upper loop and lower loop through.

Since I know 320i coupe belts are hard to find, if I were doing this today (this project occured 25 years ago):

I think you could use any small seat belt retractor.
I am not sure the 320i dogleg is really needed either, although it is a nice touch. A fixed mount to the coupe seat belt nut would be fine I think.
The chrome ring can be sourced I think from many late 70's and early 80's belts.
There is no reason you couldn't use a coupe buckle with the coupe female receptacle on the tunnel.
You might skip the adjustment buckle in the top loop.
I found most any cobbler or upholstery shop could sew the belts nicely. I took a sample of the exact stitching I wanted and they matched it which seemed as strong or stronger than OEM stitching.

In summary, I have seen a lot of coupes in two and a half decades. And I have yet to see three point belts that I like better than Paul Cain's setup. Downsides for me were the welding and sourcing the 320i parts (which probably aren't the only usable source).