Think I buggered my wiper/light stalk being ham fisted when 'acclimating' to the E3 on an evening drive. My E9 set up is modified and very 'different'.
Now I cant turn off the wipers or turn on high beams...argh.

Any advise on a fix or locating a replacement appreciated.

Are they the same 'stalk' from an E9? (wondering if I may have one stashed somewhere?!)

that's a good question. i know the part numbers are different but i have no idea if its just the wiring that is different or just the length / angle of the actual stalk. i would think the wiring was basically the same as i remember (could be off) the configuration is the same (right side turn on pre '74 and left side turn on the '74).

what is the model year of your e3? i would recommend giving a shout to Al Taylor as he has always had a lot of e3 stuff

I think the connector at least is different between years, black vs white, although i think there's more than just the color.

on e9 the connector is different between pre '74 and 74+ ... also a different color. the early ones are translucent white ... i have seen the late ones as black 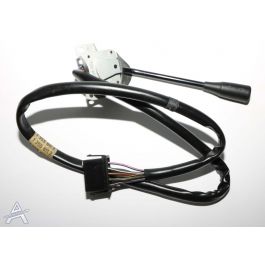 i just looked and they have the same part number for both e3 + e9. real oem, confirms this for the 74+ for both models (e3 + e9), but there are different part numbers listed in the individual listings.

what year car do you have?