Inherited a 2800 CS and looking for advice

I recently inherited my dad's 1970 2800 CS, upon which he lavished more attention than he did on any other members of his family beginning in 1971, when he bought it used.

About a decade ago, he spent $40,000 removing the rust, stripping it to the metal and repainting it. For some reason, he opted not to re-install seat belts or shoulder harnesses. As a result, I'm now uncomfortable driving it. Does anyone have any suggestions for installing them? is it ok to buy new ones that fit (since I have had no luck finding original ones)? If so, any suggestions for what kind and who sells them?

The car also needs a windshield wiper holder. Any suggestions for finding one of those?

Finally, the car -- which is garaged in St. Louis -- has not been driven for nearly a year. Do I need to take any precautions (besides jumpstarting it) before driving it?

Welcome to the forum! Sounds like a special car with a wonderful history.

@Bluedevil makes fantastic seatbelts that are also more up to date safety-wise. I can PM you as well.

Photos of the car...

If it were mine and I was starting after a year I would pull the spark plugs and squirt some oil or Mystery Oil in the cylinders and rotate the engine by hand, then drain and clean the fuel tank, clean out the fuel lines, replace fuel filter, and change the oil and coolant. Might be overkill, but imho better safe than sorry. Then a good tune up.

in regard to seatbelts, the 2800cs does not have the roof mounted attachment that allowed the better shoulder seatbelt ... the mount was behind the rear seat and was basically a spaghetti belt that always gets tangled up ... and is a totally manual belt, the lap belt portion bolts to the car frame just behind the drivers side seat track. the other side of the belt mounted to the transmission tunnel just behind the inner seat track.

here's what i would do, i would buy a set of the retractable lap belts from coupeking. www.coupeking.com. that's what i have in my 2800cs. eventually i am going to reinforce behind the rear door post to put in 635csi belts so i have a shoulder belt that is retracting.

tgw1234 said:
The car also needs a windshield wiper holder. Any suggestions for finding one of those?
Click to expand...

I don't understand what a "windshield wiper holder" is. Perhaps you should post a picture of the area this missing part would have occupied, or describe it in some other way.

has not been driven for nearly a year. Do I need to take any precautions (besides jumpstarting it) before driving it?
Click to expand...

You definitely don't want to just try jumpstarting it. Even if you didn't care about damaging the engine due to a lack of lubrication, after a year, the old gas would be stale, the carburetors may be gummed up with fuel residue, so it would be unlikely to start or run very well. I would follow the advice that Stevehose offered.

It is not optimal to use old gas but I started my 2002 after a year and it ran fine, i promptly went to the gas station and added more.

Everything Stevehose says...plus I'd also flush a quart of brake fluid through the system and insure the brakes are working properly.

Also, once you do all the tasks Stevehose outlines, I'd disconnect the coil wire and crank it on the starter until the oil light goes out to pre lube it before attempting to start it.
D

Good advice above, guys...Windshield wiper arm, perhaps is what your'e looking for?
I hope that you learn to love it more than your family, like the rest of us have.... ..not really, but it is a special vehicle.
Bluedevils is a friend, and is the best; and he would be the first to tell you not to buy new asian junk. Good guy as well, for a Duke fan.

If you are not comfortable working on the car yourself, I highly recommend reaching out to Greg at Bimmers R Us. They worked on all 3 of my BMWs (including my 72 csi) for the 7 years we lived in the STL. As a matter of fact , he there is a part in the mail from him to me as I write this.

Tom - I have a set of these: https://www.krjraceproducts.com/shopping/productDetails.aspx?i=1085229 Shroth racing harnesses in my coupe. I got the idea to use these from Mario Lanston at VSR in New Hampshire (so this is not just some hack idea I came up with); Mario has installed several sets of these for customers, including two I saw while touring his shop.

They mount on the floor using the stock seat belt mount location, and on the rear deck using a mounting boss that had been installed by the factory. Using this mounting location means you cannot have anyone in the back seat while using these. Not sure if the mounting bosses were in all coupes, but my car was originally a 71 CS auto manufactured within a year of your car. Perhaps one of the 2800 folks here can help with this.

Well designed and very secure using factory mounts. Intertial reel setup designed to tension the belts and pull you back in an accident, but requires the installation of a yaw sensor (mine are underneath the rear seats). Here are a couple of pictures of my install I took while changing the color of my seats: 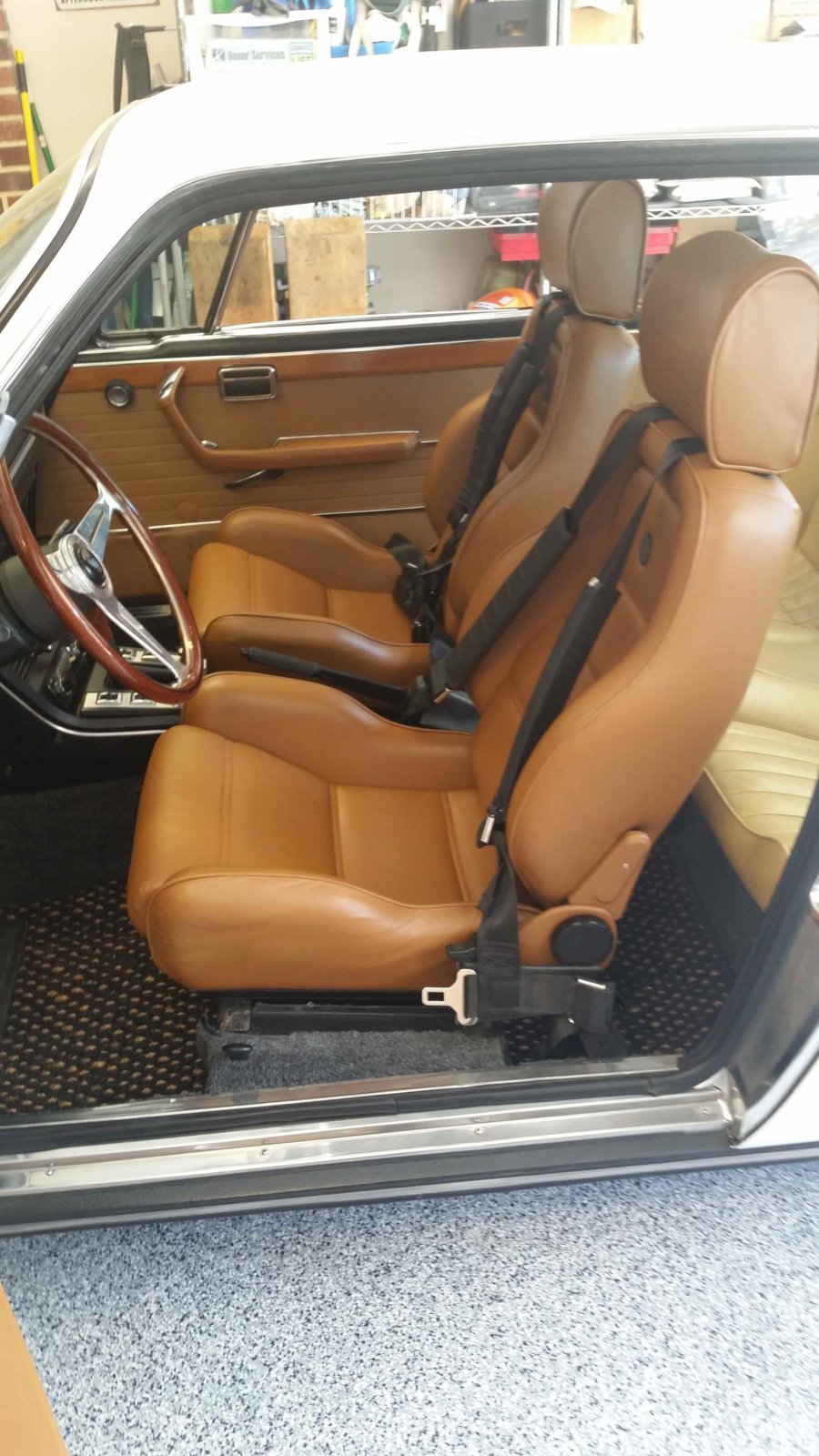 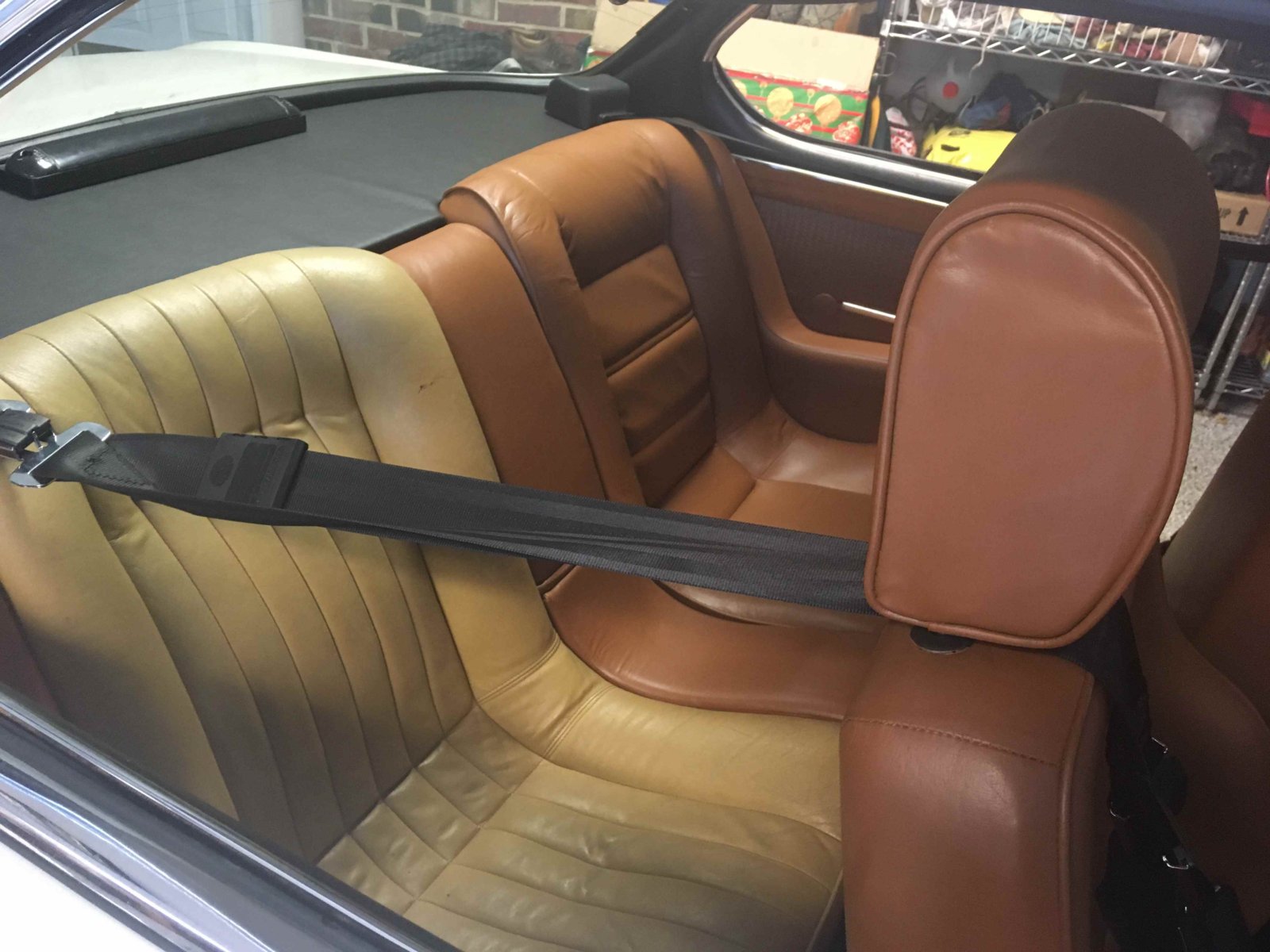 As to start up, in addition to Steve's excellent list, you should fully charge the battery before you start the car.
B