There are several posts about the B35, but not much specific info about how to make it work using the D-Jet/L-Jet intake hardware.

1. Engine mounting brackets--what modifications are necessary?
2. How to combine the old-style throttle linkages with the Motronic "cable" linkages?
3. Related to #2, will we need to use the Motronic throttle body housing?
4. What injectors to use? The barbed ends on the stock B35 injectors will not fit into the L-Jet intake manifolds. Can the injectors be rebuilt with different tips? Alternatively, I have a set of Mustang injectors that look like they will fit, and I have used with Motronic 1.1 in my E28.
5. Fuel injector rail--what have people fabricated to mount the Motronic-style fuel rail?

Any other wisdom from those who have done it?
V

Coincidentally, I have a mock up for my FI conversion on the bench right now. I'm using an L-jet log with e21 runners. I've been told by no lesser an authority than La Jolla Independent that it's not possible to use the Motronic fuel rail; thus, I am working on a way to use the Motronic fuel rail... If necessary, an L-jet fuel rail will work fine, but I would rather avoid having the extra little chunks of fuel hose. Alternately, I might go fishing for fuel rails from other 6 cyl applications, or just fabricate a custom one. Not rocket science, for sure.

I have a pretty slick throttle linkage in my Motronic powered e12. It uses the original bell crank on the side of the block with a simple added bracket to connect to the later-model throttle cable. I have pics somewhere, possibly on a CD because I can't find them on this computer.

If you are running Motronic then it will be easier to use the Motronic TB with the correct throttle position indicator. The Motronic TB mounts with 6mm studs, not 8mm like the older TB's, and the pattern is slightly different. I'm going to fab a simple adapter plate to sandwich between the Motronic TB and the L-jet log. And extra 10mm-15mm of space will make for a better position for the throttle cable too. I'm going to be running MegaSquirt, so I may look at other TB options.

There are a number of Bosch injectors that are compatible, the Ford ones are plentiful and relatively cheap. I haven't got that far yet, but I think it is possible to drill the injector holes in the old-style intake to match the size of the Motronic injectors.

On the engine mounts, IIRC the intake side is not a problem, but on the exhaust side the later engines have different mounting holes. In a nutshell, you need to build an adapter. I'd think some combination of the old style mount, the new style mount and a welder should yield a solution. Just have Al call in some of his cheap Canadian labor. :wink:
M

THe D-jet injectors use a clamp and rubber ring kind of arrangment to hold them in place, while the square box style of motronic rail uses clips and "bolt down" to hold in place.
It is possible to use a motronic rail in the d-jet manifold, and make brackets to hold the rail, and use the original d-jet clamping
The advantage being you can use the motronic pressure regulator too.
THe most important thing to check is the spacing between injectors so they drop into the holes in the E9 manifold.

THe big difference is the way the fuel line is connected. D-jet and L jet injectors use a barbed hose connection while Motronic and later have clips and o-rings.

As far as I am aware a L-jet injector (yellow top) will fit and seat in the D-jet manifold. I have physically tried this
The same appears to apply to a Motronic injector as the injector tip and seat area is as far as I can tell are the same. It's the spacing between the Motronic injectors that is a concern.

If you want to use L-jet injectors, with the barb type hose connection you need to use the following parts:

These can often be found on late 1970's early 80's 5 series with the M30 engine. - take the injectors too especially if the car is a 535
Unfortunately in the UK most of these have been sent away for scrap due to high prices, so they are very difficult to find now.

If I remember correctly D-Jet injectors are Low impedance and L-Jet injectors on wards are high Impedance. D-jet injectors will work on motronic but need resistors adding. Motronic injectors will fit a D-Jet manifold but a special collar has to be made to secure it (will see if I cn find the pattern from when I had mine made) but D-jet will not work high inpedence injectors.

If you are going to mix and match injectors, make sure you get the impedance and flow rates right or it'll never work. I screwed around with trying to get a Motronic rail to work, but it wasn't worth the trouble. I would just use the Motronic injectors with the D-Jet mounting rings, along with barbed "caps" on the injectors to let you run a D-Jet or L-Jet rail. You can use an L-jet rail along with a Saab 900S regulator (I believe). That gets you the same pressure rating and vacuum control like the stock motronic set-up. The D-Jet rail will work, but you'll need to turn the regulator up all the way to get the right pressure and you won't have the increase in fuel pressure as manifold pressure rises. You can see the injector caps here: 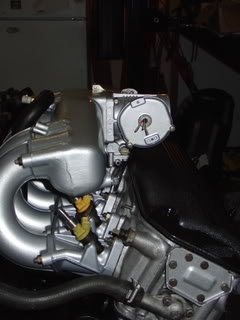 For the throttle body, I would use the L-jet throttle body and adapt the Motronic throttle position sensor. I believe it bolts right on with little or no modification. That lets you use the stock CSi throttle linkage. On mine, I used the D-Jet and adapted a throttle position sensor from a Mustang! -- but I'm not using Motronic and it wouldn't work for that conversion (but its perfect for Megasquirt or pretty much any other aftermarket ECU): 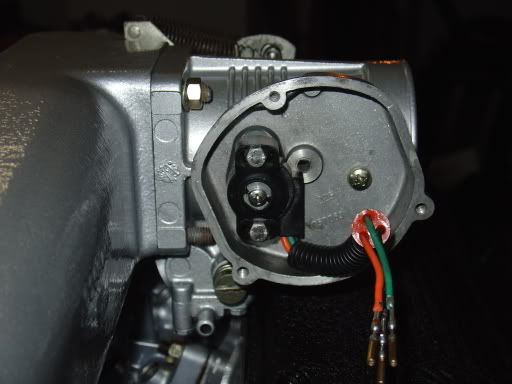 I also drilled out the cold start injector body and mounted the intake air sensor there. Then I put the idle bypass valve below it. Again, this isn't Motronic, but I would try to do it the same way if you can: 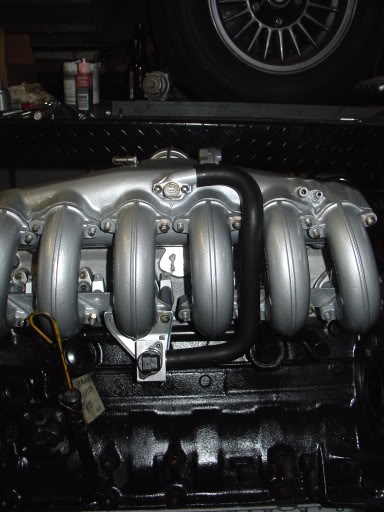 The motor mount is no big deal. You're just missing two holes, I believe. A flat plate and a welder takes care of that very easily.

Now, if you really want to make it look trick, swap over to a dummy distributor with the mechanical and vacuum advances locked out. That's what I have on mine. You need to look twice to realize its not a stock D-Jet.
V

Andy, that must be a D-jet TB. The L-Jet TB is nowhere near as clean, it has an idle bypass, water ports, and other crap.
A

Good eye -- it is a D-Jet TB, but it has all that stuff, too -- its all on the other side. You can see the water ports and bypass screw in the second picture.
M

Andy,
Nice to see progress with your FI system. Couple of questions if you don't mind...

1... How are you "detecting" crank position for the timing?
2... Is your air bypass a soleniod (open or closed) or an oscillating type?
3... Have you "dumped" the cold start injector completely?
4... Ar you using a modern air temperature and MAP sensor?

Ooops more than a couple of questions!

Assume your going to use a L or Motronic fuel pump, and yes the pressure regulator from a 1988 - 1993 saab 900 with FI will work, infact one from any car with L/LH/LE/Motronic will work assuming that it will physically fit as the Bosch family of L injection all works on basically the same pressure.
Flow rates /pump output does vary, because although different injectors have different flow rates (cc/min or lbs/hr) they all work at the same pressure

Hey Malc. Yes, I've had the whole thing up and running for a couple of months now. Its taken some time to get the tuning dialed in, but its pretty good now. Here are a few responses to your questions:

(1) I'm actually running an L-Jet distributor with a VR sensor. I have the VR sensor triggering a GM ignition module which then triggers the ECU. The ECU timing signal goes back to the GM module which is then used to trigger an MSD 6A. This lets me run full timing control. It also gives me the advantage of timing retard when cranking. When I first did set everything up, I just had the VR sensor triggering the MSD directly, then triggered the ECU off of the MSD tach output. This worked okay with the distributor controlling timing, but my idle was pretty rough since the ECU idle logic uses timing to keep the idle stable. Its much better now with full timing control.

(2) I have a true GM idle air control valve. It is a stepper motor with 200 or so "steps" controlled by the ECU.

(3) I don't use a cold-start injector. The ECU I'm using doesn't support it and I haven't missed it all all. The car literally fires up immediately when you crank it. I forgot whether Motronic uses a cold-start injector. If it does, then my locations for the intake air temp sensor may not work, but you should still be able to plumb the bypass air through there.

(4) Yes, I'm running an IAT sensor, a coolant temp sensor and a map sensor -- NO AFM or MAF (which was one of my primary goals along with full programming control with a laptop).

My set up is using a GM ECU, but it should work just as well for Megasquirt or pretty much any aftermarket system using GM sensors. I also highly recommend a wide-band O2 sensor. It makes tuning MUCH easier. I actually have mine hard wired into the car and use a narrowband output to signal the ECU. That way, I only need to run a single O2 sensor.

On the Motronic regulator -- there are minor pressure differences. I suggested the Saab 900S since it is 3.0 bar (I think) while the 900T is 2.8 bar (you'll want to check which one matches the 535i Motronic pressure - I believe its 3.0 bar) and it has the proper connections to bolt on to the L-Jet rail. I'm sure there are others that will work, but the pressures do vary slightly and not all of them include the vacuum line for increasing fuel pressure.

Figuring this stuff out is well worth it in the end. I couldn't be happier with how my car runs after all of this. Its a huge difference over the old D-Jet. Plus, being able to tune everything is a nice bonus.
V