OK I have pulled the trigger and am heading to the Dark Side with a set of Italian triple 40 DCOE webers - I will be detailing the trials and tribulations of rebuild and install in the coming weeks. I love my Zeniths but am fascinated with the plumbing and exotic potential of 3 side drafts. So for this experiment I am thinking:

I would appreciate hearing from current triple owners on any tips/advice to consider so I minimize noob mistakes.

Do I need to relay the pump and/or how should I wire it?

What else to consider (besides saving for gas money)?

Well-Known Member · From New Orleans, LA
I enjoy maintaining as much as driving these works of art, and am interested in anything vintage - cars, guitars, hi-fi etc.
Site Donor $$


Nicad said:
I think I will get this one for my application....after I buy some Coco Mats.

Steve;
I wanted to thank you publicly for all the help you have given me on this project. Without your valuable assistance I would have been lost at times. In turn, I would like to thank all those who have helped to give Steve extensive knowledge on this upgrade.
I am nearing completion and need to still fine tune the AFR. But, it halls ass and is a different car now to drive. Before, I thought it looked cool and Performed OK. Now it is a different story. Need to continue the performance upgrades. All it takes is money and the people of this amazing forum.
It definitely doesn't look as pretty as others on this forum but will be working towards a full restoration over the next number of years.
FYI- I performed the upgrade pretty much how Steve set it out. Except due to my manifold it required new thermostat housing and Tii brake booster. I put together an Excel with the full cost and links to most of the parts purchased if anybody is thinking about pursuing this upgrade. A large part of the information is courtesy of Steve.

Looks great. I'd like a copy of the Excel, and I recommend adding it to our documents section for future reference. Maybe Dan can help with that.

Looks great, but we still have some work to do! You have shown way more patience during this process than I could ever muster, and the one take away from a triple install is that one's patience will certainly be tested (several times).

Don't let that spreadsheet get into the hands of my wife!

I believe she probably has only identified about 50% of my purchases for the E9.
I could not fly the headers under the wide radar. I will regret it I know!

To update this thread (saga), I have done some tweaking and also had a tuning breakthrough today.

First, the fact that my AFR gauge does not match or dim with the other 2 VDO's (it has LED's in it vs. the bulbs of the VDO's) bugged the **** out of me and I had to do something. This week I cut the bezel off the gauge again (a VDO bezel I grafted on from a spare gauge) and installed the bulb from the old gauge as well as the old needle (both took lots of cutting, grafting, etc.). The result is now it dims with the other gauges, is the same brightness, and no orange leaking from the original needle. Now it's as close as it's gonna get (compare to the previous version posted earlier): 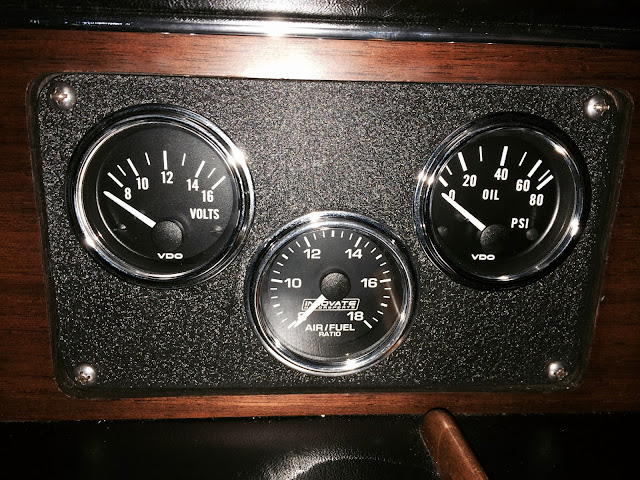 This will not work for DCOE's as the internals are different. There are other threads on DCOE jetting. I will post any jet changes because this can be a frustrating part of setting triples up.


Third, just like jetting should be tested while moving under load and not revving in neutral, I now believe so should the balancing of the barrels and synching of the carbs. This especially applies to those of us with the interconnect linkage system (not the individual rods to each carb mounted on the manifold crossbar although this may apply there also). I decided to see how the balancing and synching looked while driving under various loads so I got 8' of vacuum tube for each side of my Carb Mate vacuum device and ran it into the cab. I noticed that the balance between each barrel and the synch between the carbs would go out under acceleration and higher rpms when driving so I adjusted each accordingly. The DCOM has idle air bleed screws to balance the barrels in each carb so when synching carbs I hooked up the Carb Mate to the port on each carb that has it's bleed screw closed in order to have consistency. I suspect this change of synch under load is a result of the slight torquing that goes from the source of the pedal linkage attachment and through each carb, the third not opening as quickly as the second which is not as fast as the first. This is not evident when revving in neutral-I compensated for it and the difference is huge. Better AFR's and more intake howl under WOT with a sweet resonating tone. I also readjusted the idle mixtures after this.

If you have this interconnect system I would check this under load, you may be leaving power on the table!
Last edited: Nov 24, 2013

To update the record and hopefully save someone some rejetting money, for my triple DCOM carbs I have now settled on:

Timing 34 all in
Manifold advance
Plug gaps at .024

With smooth idle and a happy engine.

Also I had an annoying amount of gas smell coming from the engine bay after a drive, all triples smell because they vent to the atmosphere but I noticed that the paper top cover gaskets were discolored somewhat so I figured they were wicking fuel so I replaced them with the rubber ones that are available form Pierce. Absolutely worth the money as they cured the smell, now I hardly have a trace.

I also hand made some gaskets for the cold start mechanisms which are not used, this also made a difference. They are not produced by Weber so if someone wants 3 I will make them for you. Will fit DCOE or DCOM.

I ordered some longer trumpets (75mm) from Dellorto UK (hats off to them, I ordered Sunday night and they arrived on Friday from UK). I am running this jetting setup now:

DCOM's need bigger idle jets with large air bleeds because the idle and main jets are connected, my research shows that a 4 small hole air bleed may be better than a two large hole air bleed for low speed emulsion so I have those and will try that some day but right now it runs great with appropriate AFR's.

But on to these bad boys: 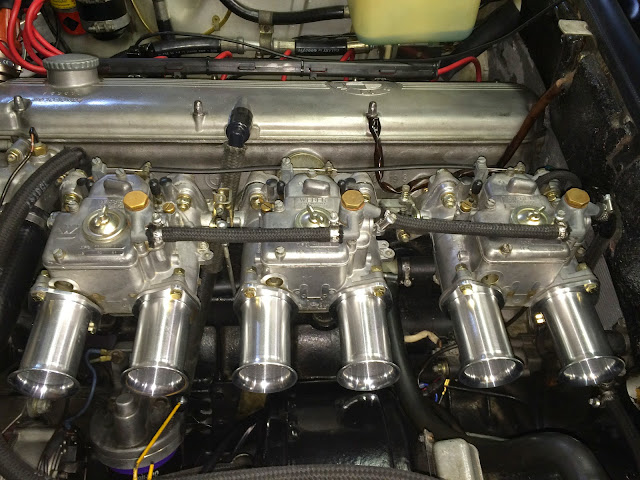 They are replacing the crappy and shorter ones I had on previously, these are the nicest quality I have seen available, spun out of a single piece of aluminum and are works of art: 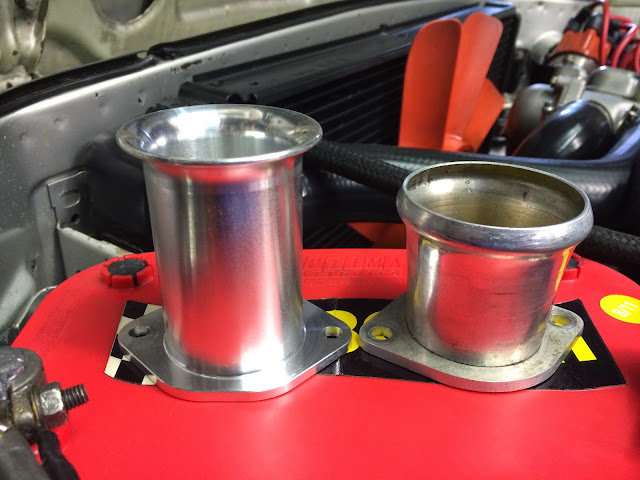 I am grounded because of weather at the moment so I will try them out tomorrow and enjoy them for the weekend before putting the angled filters on. Initial revving indicates these will be quite vocal!
Last edited: May 30, 2014
You must log in or register to reply here.
Share:
Facebook Twitter Reddit Pinterest Tumblr WhatsApp Email Share Link
Top