This thread is really more about the type of people we have the good fortune of knowing on this forum instead of just being about another one of my hare-brained projects. As some of you may know I have a fetish for triple Webers, and the intake manifold I have for them is a quite rare one made back in the day by a company called VGS. It stands for Viktor Günther Sport, in 1971 they became the German importer for Weber and also made bespoke manifolds and other tuning parts for the M30, 2002, and E21. The manifold is unique because it allows for mounting the carbs without interference from the thermostat housing or the brake booster. Even more hard to find is the matching air collector box that came with the setup, I've only seen one for sale before, about 8 years ago and I dropped the ball and didn't get it, couldn't justify the $$$ at the time. Of the various BMW tuners back in the day (Alpina, GS, et al) this is also very hard to find. Not as valuable or cool looking as the Alpina box, but it's lighter and hard to find. VGS is still in business today and they are now called VGS Motorsport but no longer make this particular item. They are looking in their archives for any additional info on this manifold/airbox setup and will send it to me if they find anything (I contacted them pleading my case in Google German).

Recently I got an email from @Keshav, our E9 brother-in-arms extraordinaire, saying he remembered I have this manifold and that an airbox just popped up on DE Kleinanzeigen, he offered to act on my behalf while I scrambled to wire the money, I wasn't going to let this one get away. Keshav was the first to contact the seller and sealed the deal, several callers soon followed him but to no avail, his quick action paid off. The airbox was shipped to Keshav from Austria and he forwarded it to me and it arrived today and it is fantastic. I can't thank him enough for not only his awareness but also his thoughtfulness regarding my possible interest in this. That, my friends, is what this forum is all about.

So I've been getting a few messages asking what's up about a recent post where I show a VGS airbox on an E3:

This is the VGS airbox/manifold combo on a set of Webers but I don't like the E12 air filter box so I luckily found a crusty CSi one on eBay that needed rehabbing: 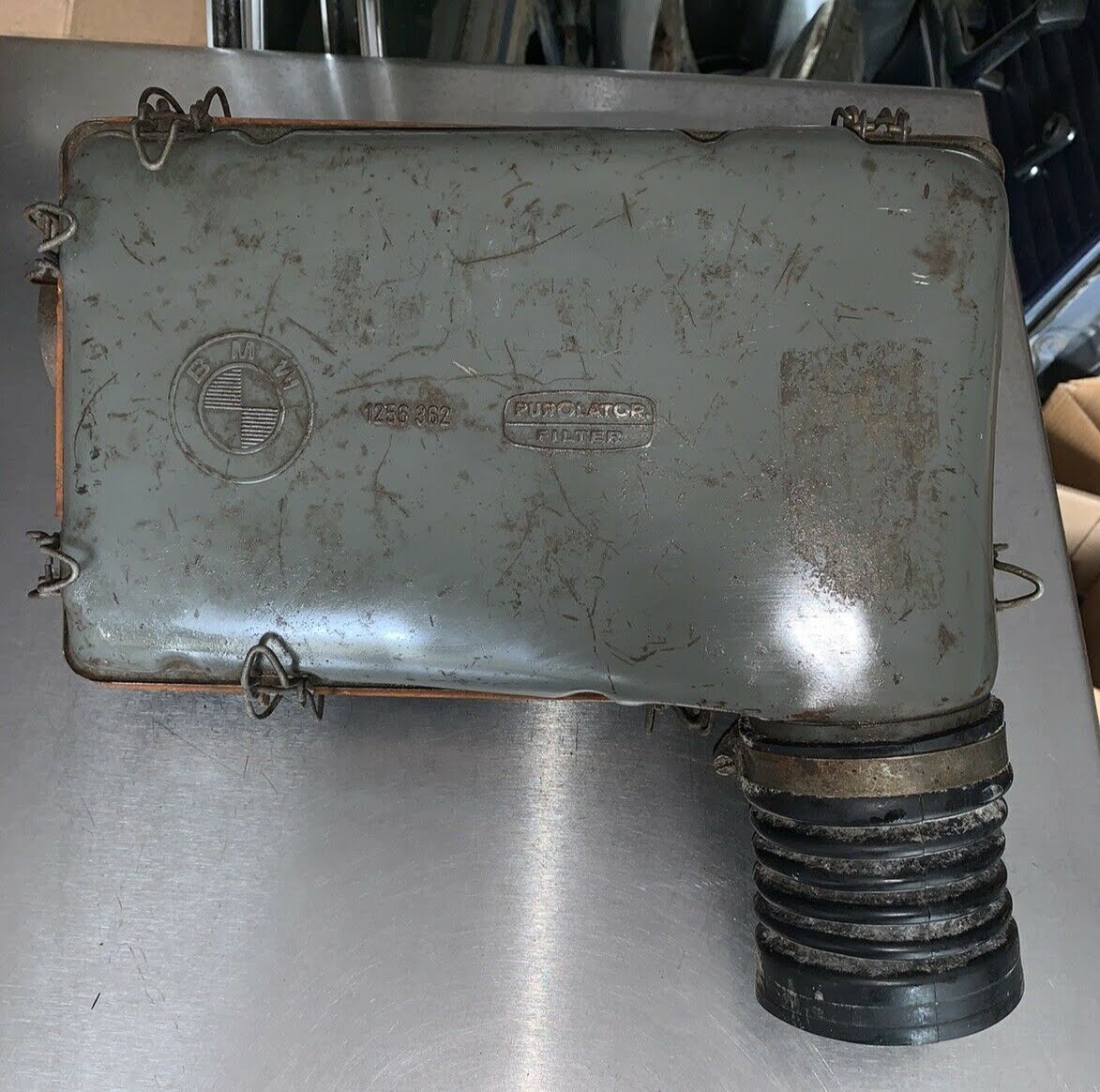 Enter brother-in-arms extraordinaire #2 @sfdon who hooked me up with some beautifully replated flat style yellow clamps. I can't thank him enough either and look forward to sending him some mardi gras treats in due course. Some vintage pictures of aftermarket tuner airboxes (thanks to @Markos, @Keshav) appears to show that these companies painted the boxes black instead of the factory grey/olive green as discussed at length on this forum. So I did mine in SEM satin black (I'll have an unused can of custom mixed RAL 7022 coming up for sale soon), and here it is with Don's clamps: 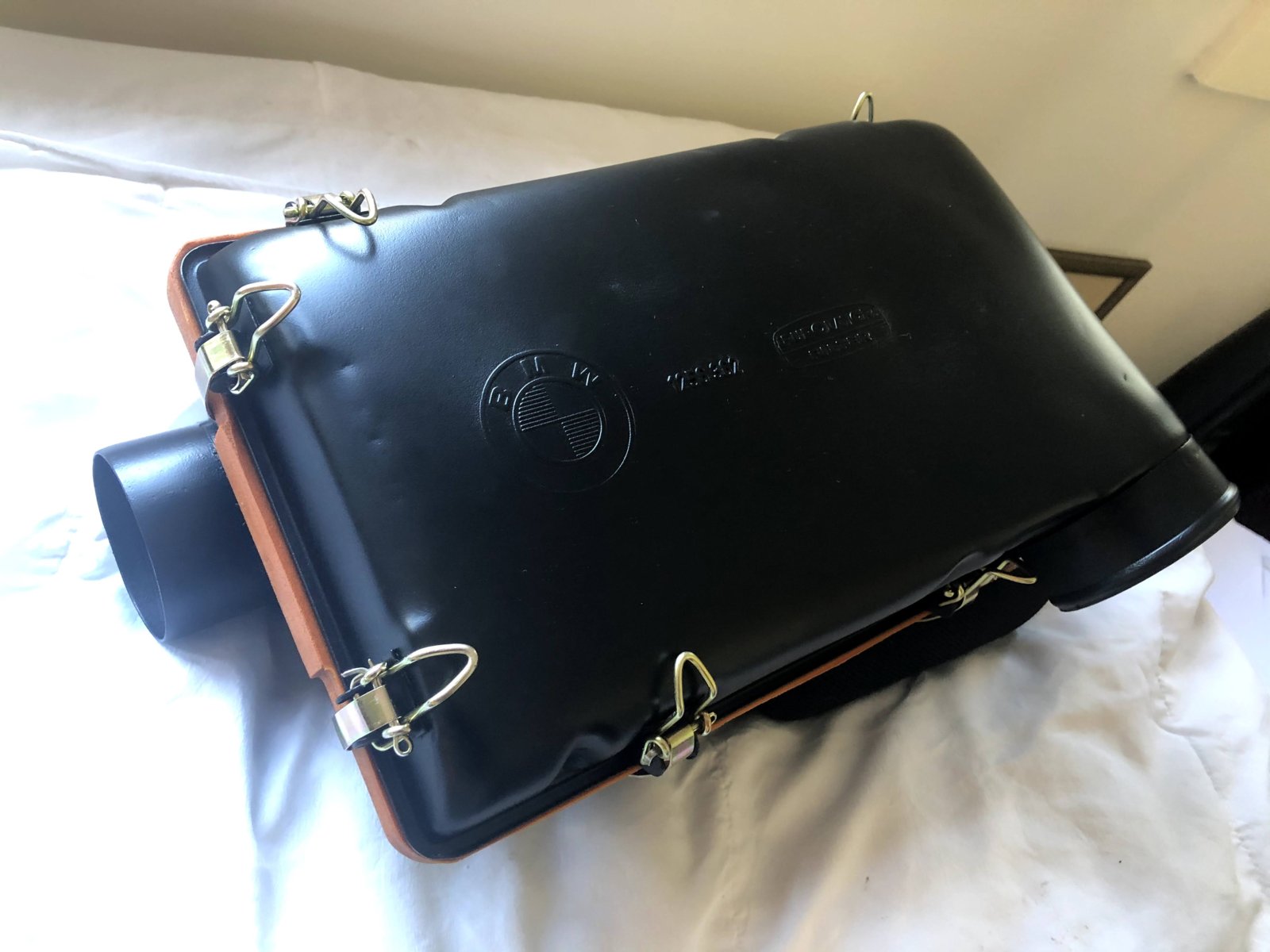 These old pics also show that the 4 lowside clamps have their ends pointing flush along the contours of the box, the 3 highside ones point away in order to access them and to have them close properly. Originally the airbox bracket on the fender was bolted in place if the car wasn't a factory CSi, I don't want to weld or drill any holes in mine so I am making a bracket for the box which will mount to the 3 bolts that once held the a/c muffler can, this will be painted black of course and won't be visible when in place: 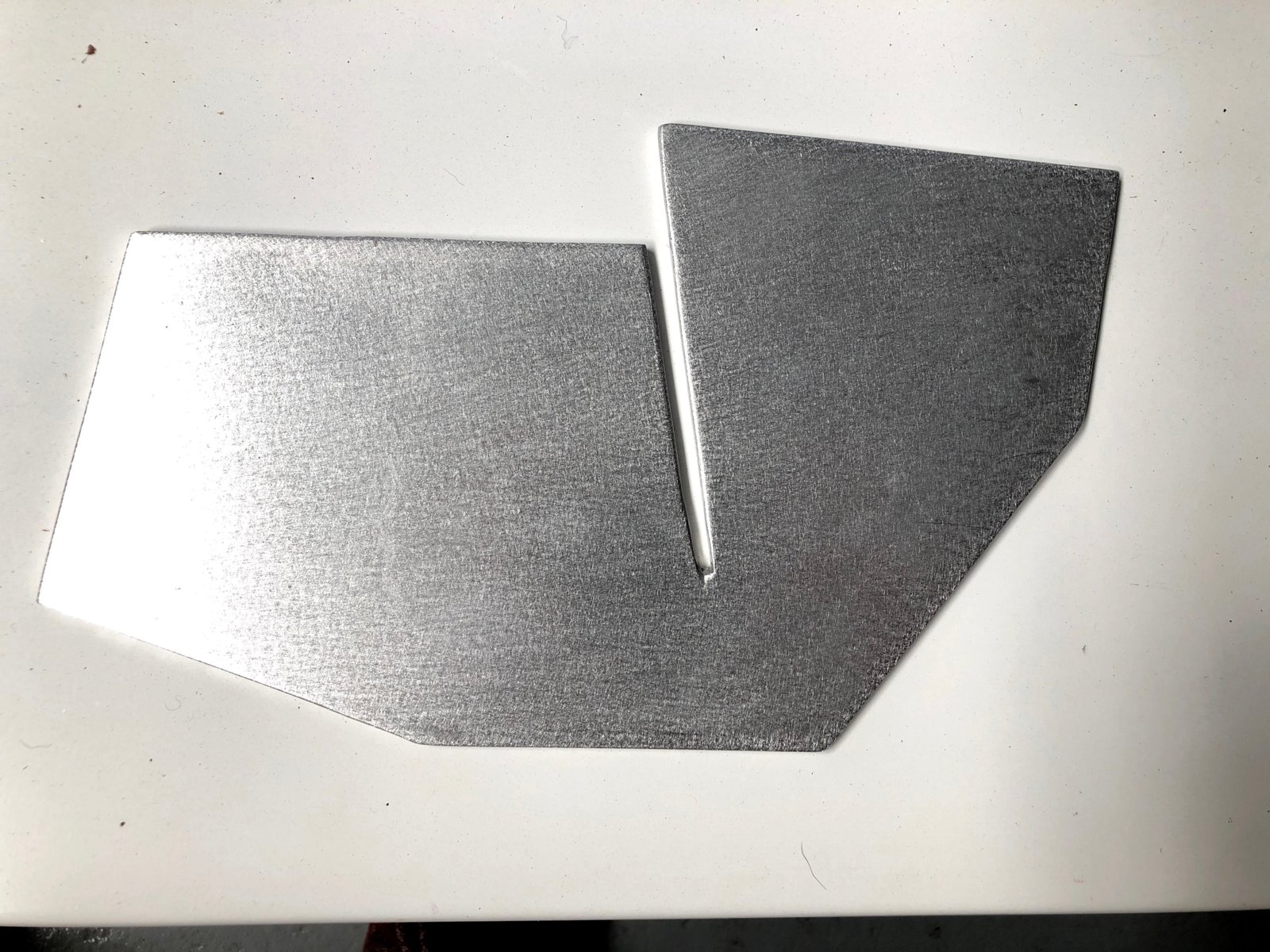 The left side slides into the filter box and the right side will mount here, this will also help me clear the a/c hoses, @adawil2002 and others have sent me pics of their airfilter box installs so I can get mine somewhat correctly placed:

The airbox arrived today and I did a test layout/fit (note the "VGS" cast into the manifold): 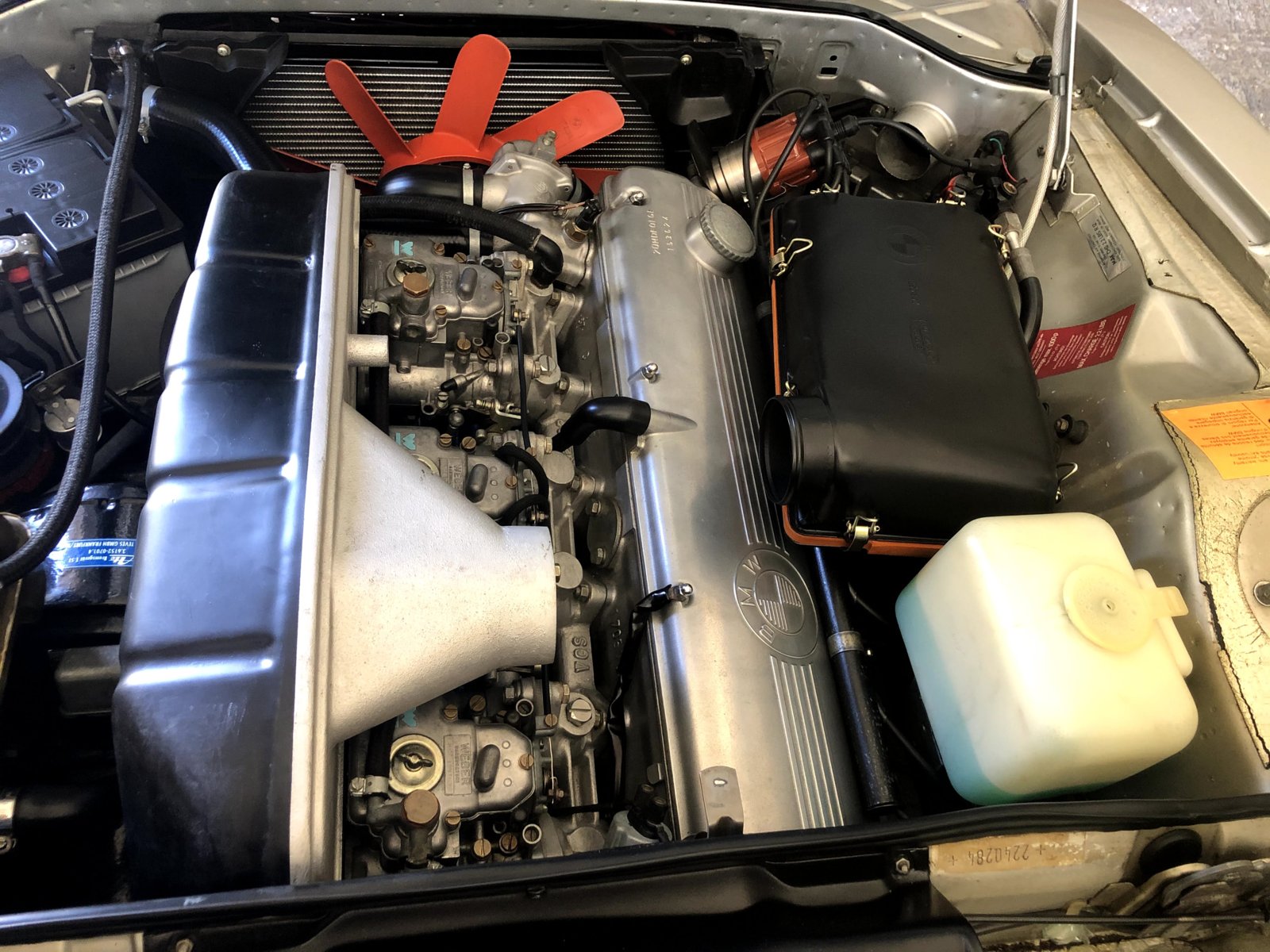 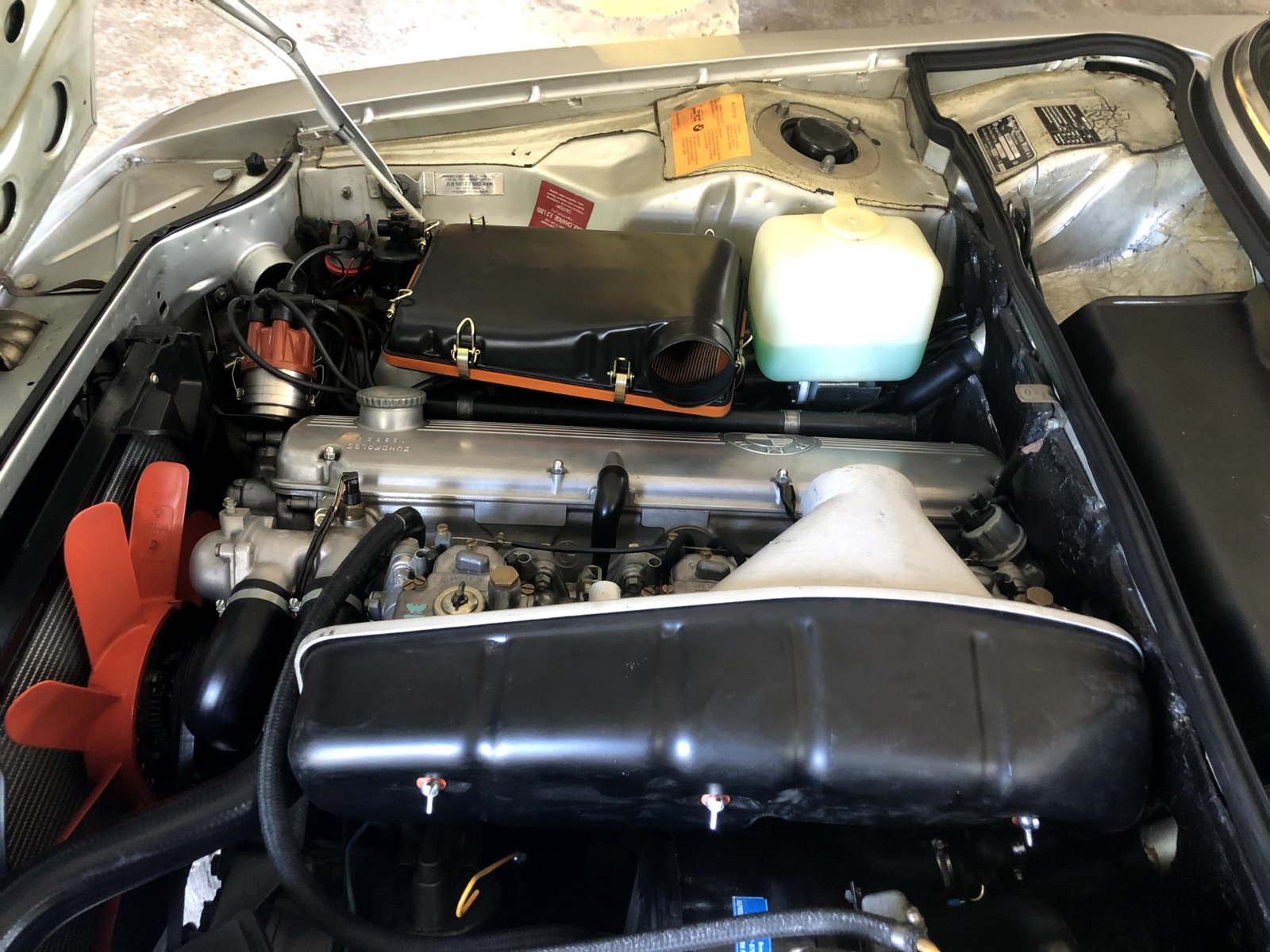 I will paint the black airbox part a matching satin black as the air cleaner, and clean up the aluminum piece. It is surprisingly light weight. I will source the 80mm corrugated carboard hose for the airbox/air filter connection and the 70mm for the air filter/cold air opening in the front end. And some vintage screw-type hose clamps.

I will continue to update the progress as it gets further along, I need to re-engineer my heater bypass valve because it interferes with the box, and some other details. I realize I will be giving up some intake music for the cold air intake and a cleaner "tuner" look (the foam filters worked great but kinda bugged me with the aftermarket appearance), we'll see how that goes. I do know that the hot turbulent air inside the engine compartment definitely affects the AFR's for the Webers so hopefully I will see some consistency from this set up.

So many thanks to this forum's very helpful members for enabling those of us with crazy projects! More as it comes together, feel free to chime in with any suggestions etc. After this will be installing some euro piano top pistons for a compression/HP bump to go along with the Webers and the Schrick 282 cam already lurking in the head.
Last edited: Oct 16, 2020

I love this subject, love the camaraderie, and love your craft! As well, this makes me wonder if I made the wrong decision when I sold my VGS manifold. Beautiful work.

Amazing....
you deserve it, 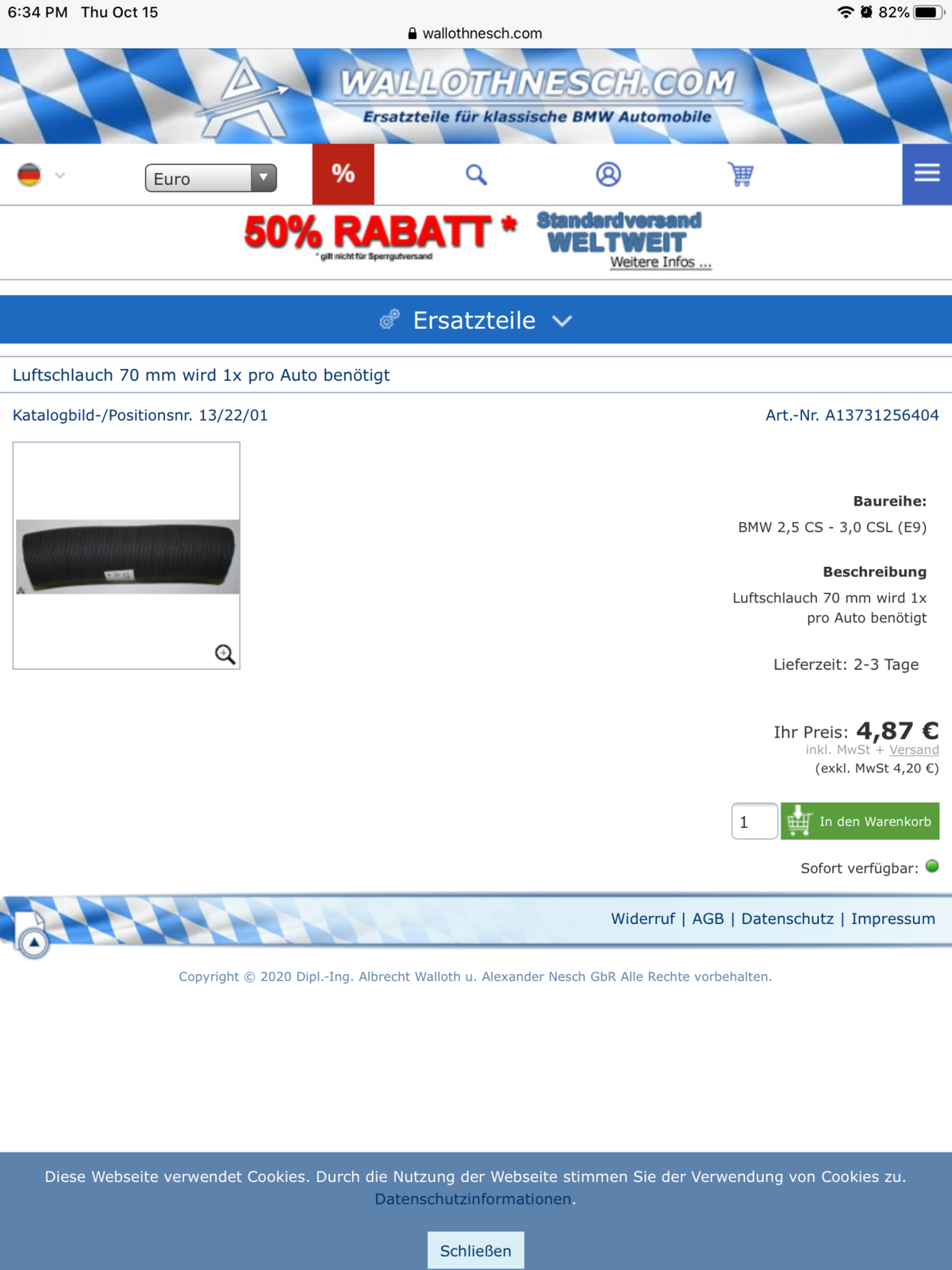 @sfdon we’ve been looking all over for that hose! Should have checked w&n.

@Stevehose your project looks awesome! I must agree that the Alpina plenum is a beastly heavy unit. All in all I think the VGS setup is better design than what Alpina came up with.

Steve, I have the large flat band clamps and can check to see what sizes I have in my stash.

this is looking really cool Steve !!! wonderful to hear about our wonderful friends @Keshav for procuring this wonderful bit of kit on your behalf, kudos to all who are helping you get this squared away

Very cool topic.
Congratulations on finding your missing piece!
I have the Alpina set up and while I love it for the heritage and striking appearance, It’s a shame it consumes the engine bay and covers the carbs so much.
I always wondered why none of the tuners relocated the battery to the rear of the car and utilised that space for the entrance to the airbox like on the newer (90’s-2000’s) Bmws, rather than the intake piping crossing the engine to take air from the “hot side” ...

Thanks I'll get back to you when I'm there.


HB Chris said:
Steve, I have the large flat band clamps and can check to see what sizes I have in my stash.
Click to expand...

Probably took the path of least resistance, the air intake hole is already over there, the CSi airbox fits there and ready to go, and they didn't want to deal with battery location.


JamesE30 said:
Very cool topic.
Congratulations on finding your missing piece!
I have the Alpina set up and while I love it for the heritage and striking appearance, It’s a shame it consumes the engine bay and covers the carbs so much.
I always wondered why none of the tuners relocated the battery to the rear of the car and utilised that space for the entrance to the airbox like on the newer (90’s-2000’s) Bmws, rather than the intake piping crossing the engine to take air from the “hot side” ...

If I didn’t have the Alpina engine I would make a project out of that haha
Click to expand...

Today I put some right angle hoses on the heater bypass valve in order to drop it lower and make room for the airbox. This allowed me to bolt it in place on the carbs, it lined up and fit perfectly. I repainted the black cover satin black SEM. Car is already faster @zinz how about those wing bolts? I love the clean "tuner" look sans oiled foam filters. Next up, the CSi air filter box mounting. 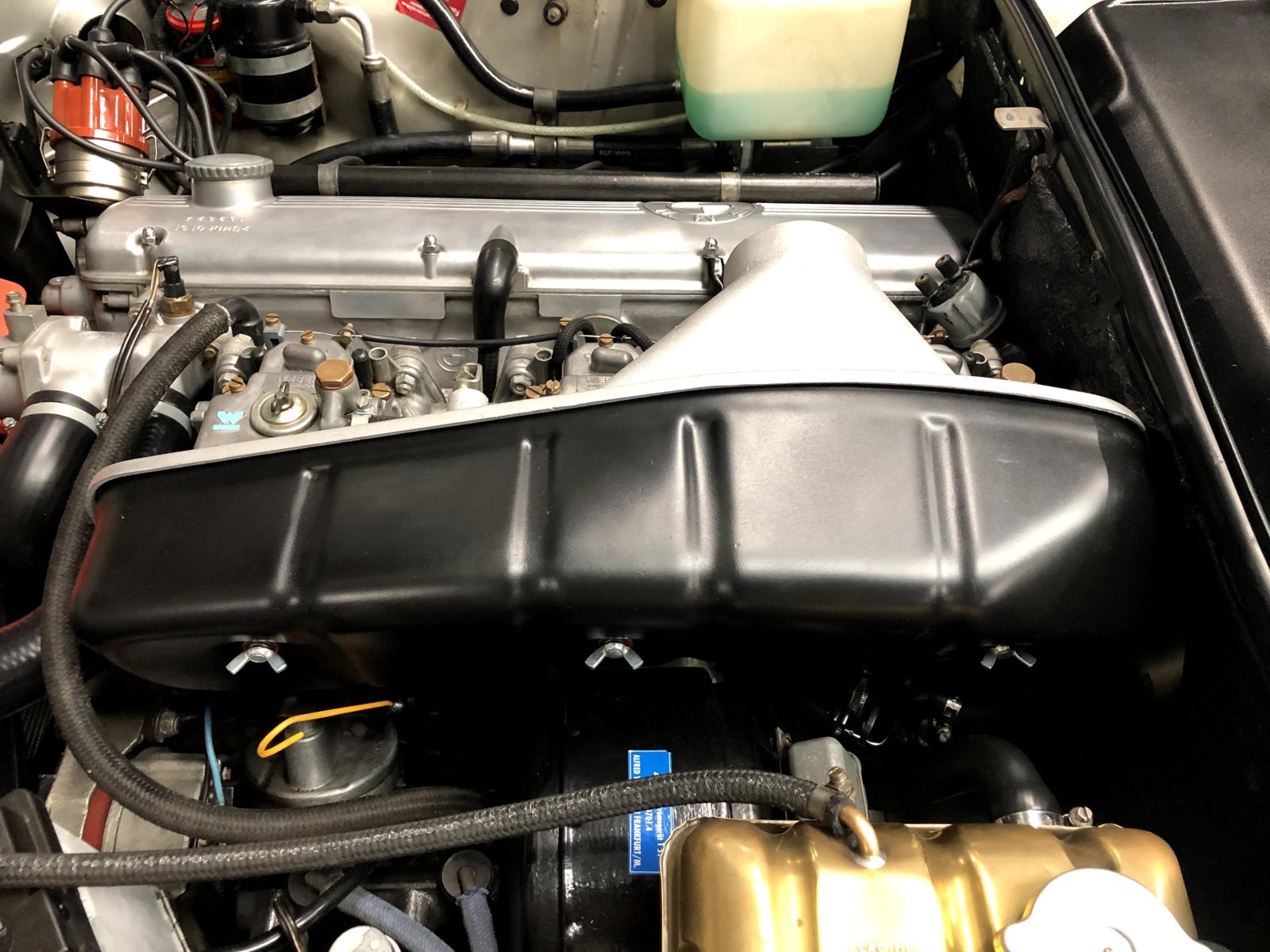 WOW!
What an incredibly cool piece of kit. Helluva a find, but perseverance paid off. It’ll be a shame not to hear those carbs, but the cool air will definitely give you more ponies.

Keshav found it, I am the beneficiary! I can still hear the carbs, will update the dB factor when the entire thing is together.


zinz said:
WOW!
What an incredibly cool piece of kit. Helluva a find, but perseverance paid off. It’ll be a shame not to hear those carbs, but the cool air will definitely give you more ponies.

go Steve ... almost makes me want to skip injection and go triples .... except, as you mention ... this is just short of unobtanium.

Got the makeshift bracket roughed in today, it bolts up to the unused a/c compressor muffler mounts and the box slides onto it like the original body mount bracket. I'll paint it black, had to bend it to adjust the box to be level and clear the a/c hoses. Not much room for error getting the box to fit in there. No problems with hood interference. Flexible duct tubing on the way, and found some nice yellow cad screw type clamps from a Porsche supplier for the airbox to air filter box tube, the other tube to the fresh air hole doesn't need clamps, none of the old pics show them. 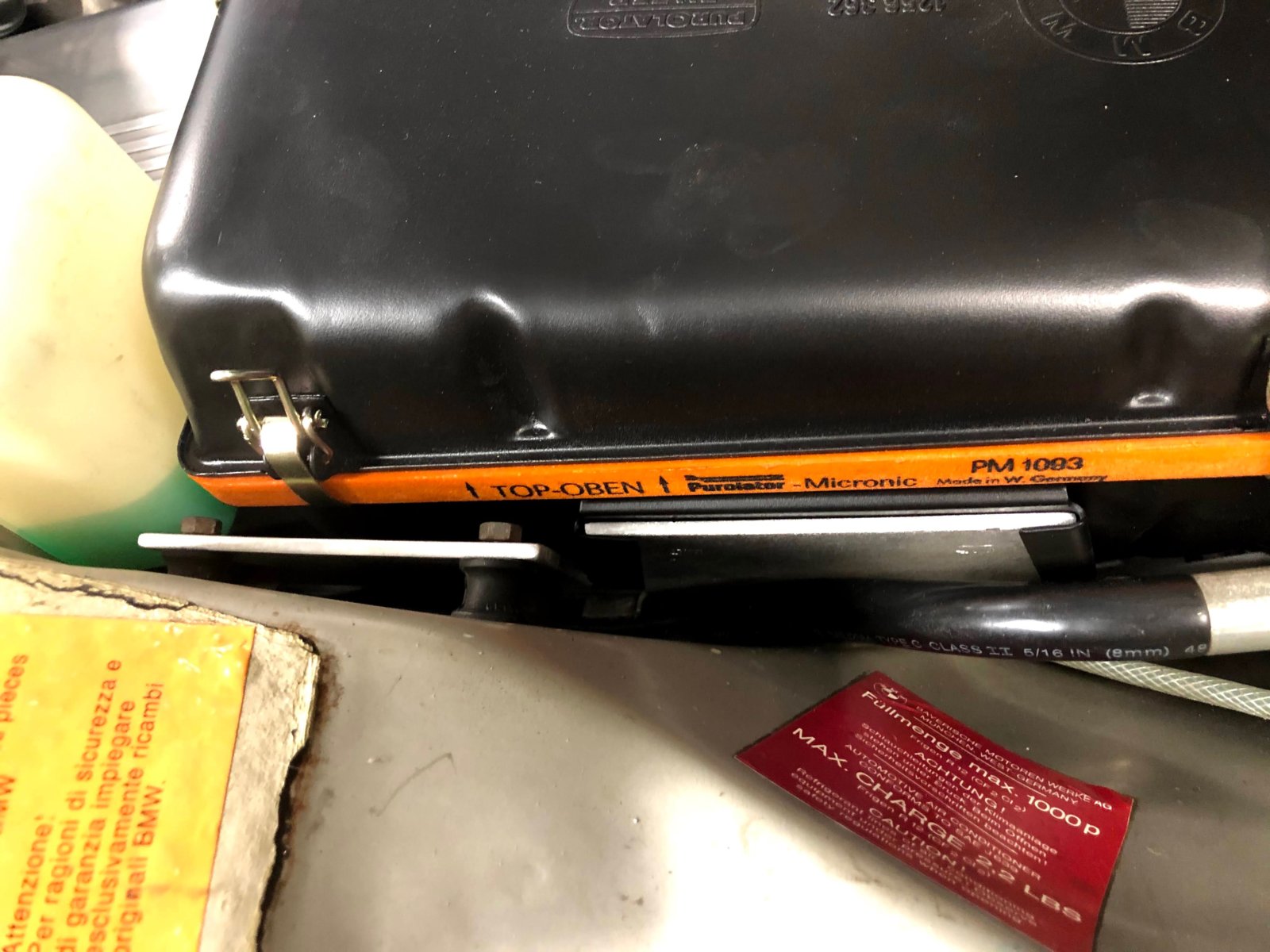 And this randomly popped up on Klienenzeigen, manifold for an M10 head: 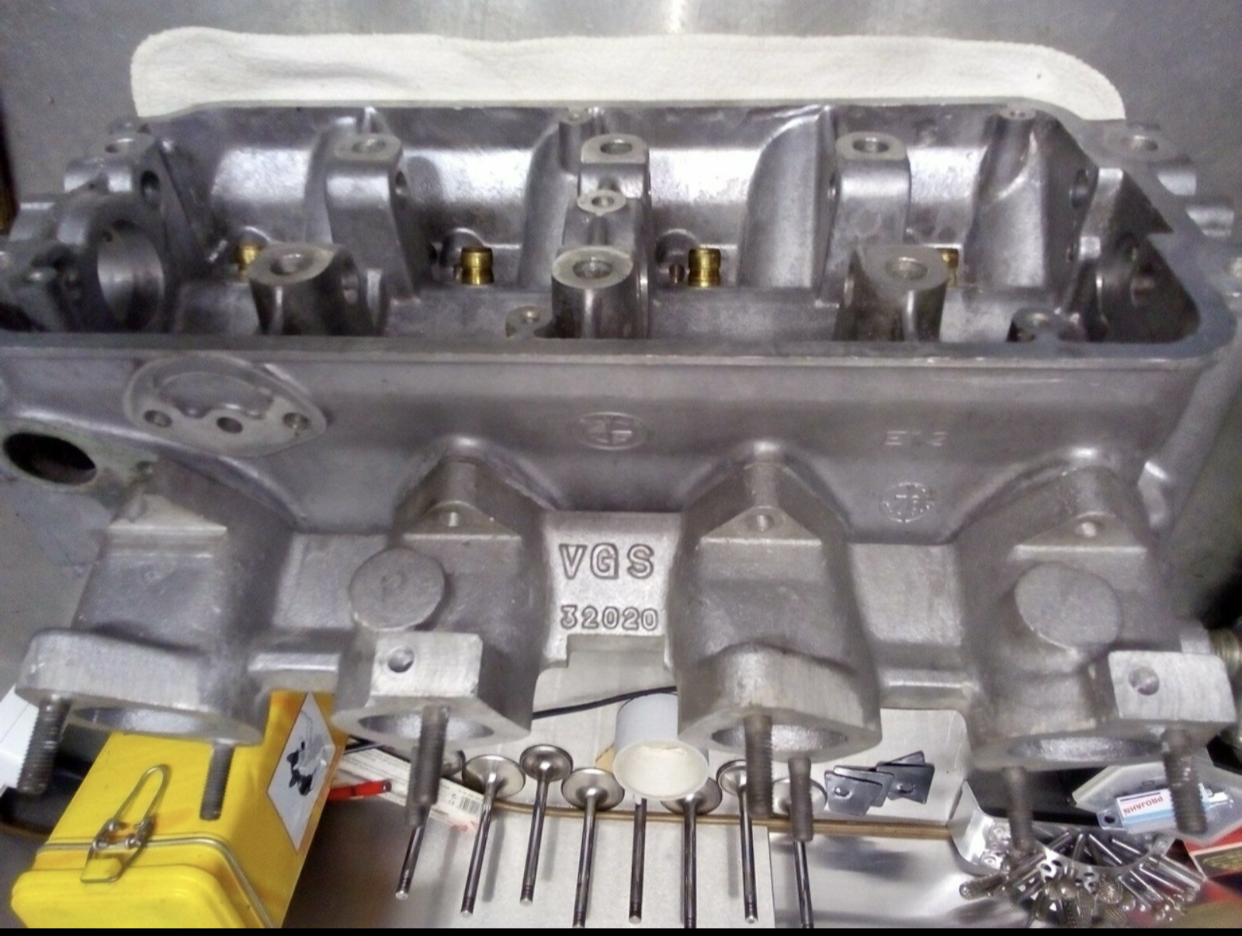 Steve - I have a Csi Air box bracket if you need it.

Oooh I like those, thanks! Appreciate the bracket offer but I don't want to weld it or drill holes for bolts in my fender, and this covers up my unruly a/c bracket mounts.

Progress, the air cleaner box mounting bracket is painted and installed on 3 new rubber isolators and the box slides on nicely, clearing the a/c hoses and allowing the box to sit cleanly in the engine compartment. 70mm cardboard tube is attached between the box and cold air hole in the nose clip. The 80mm cardboard tube between the air cleaner box and carb airbox is arriving from the UK on Monday (one bloody expensive piece of cardboard but I wanted the correct look) along with a thin-walled braided hose for the valve cover breather to airbox connection (not easy to find braided in 22mm ID - regular heater hose looks too thick). Old school yellow cad screw-type clamps for the 80mm hose also enroute. I painted the heater fan motor cover a fresh coat of SEM satin to match the recently painted air boxes. Almost done! 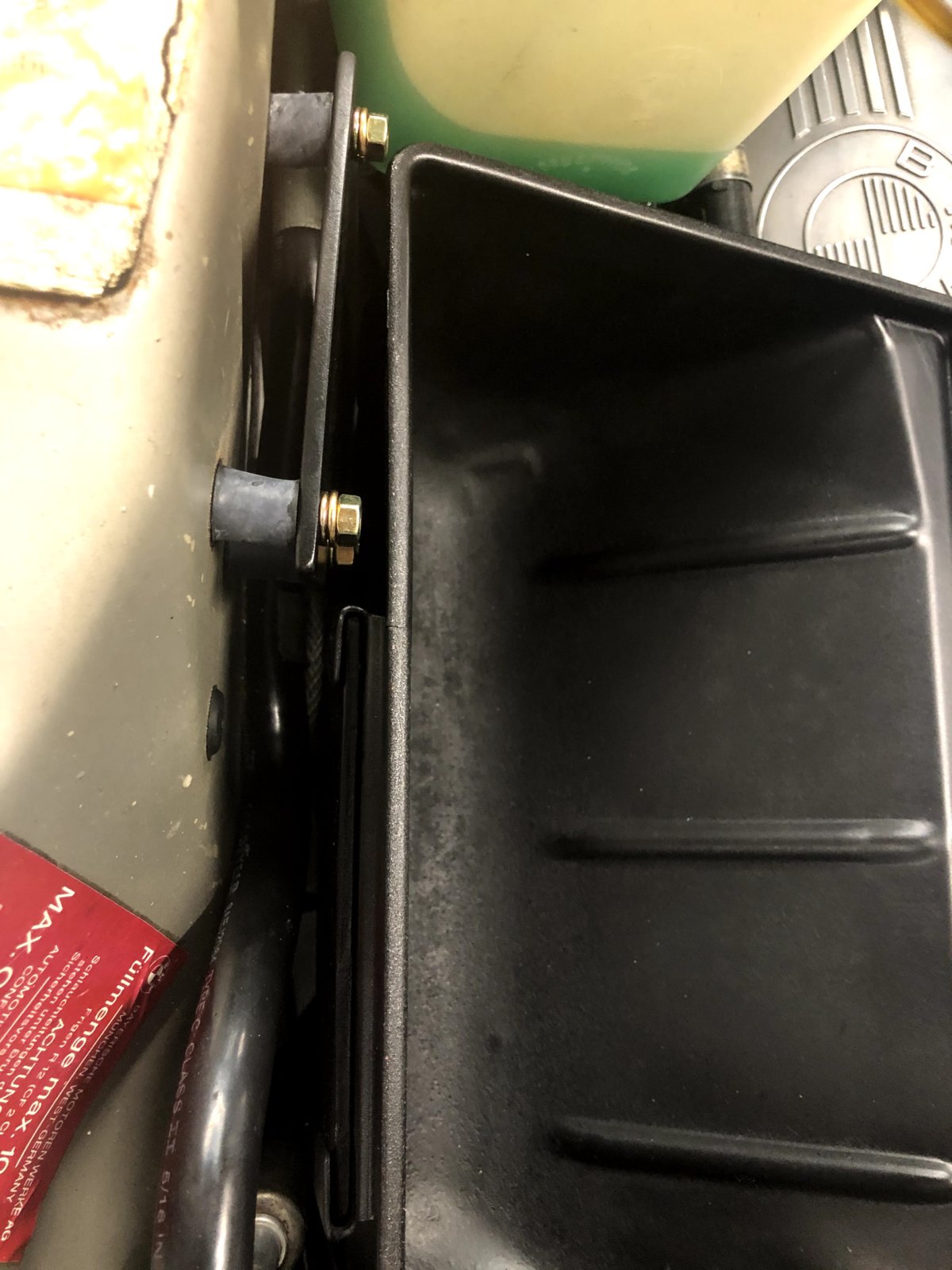 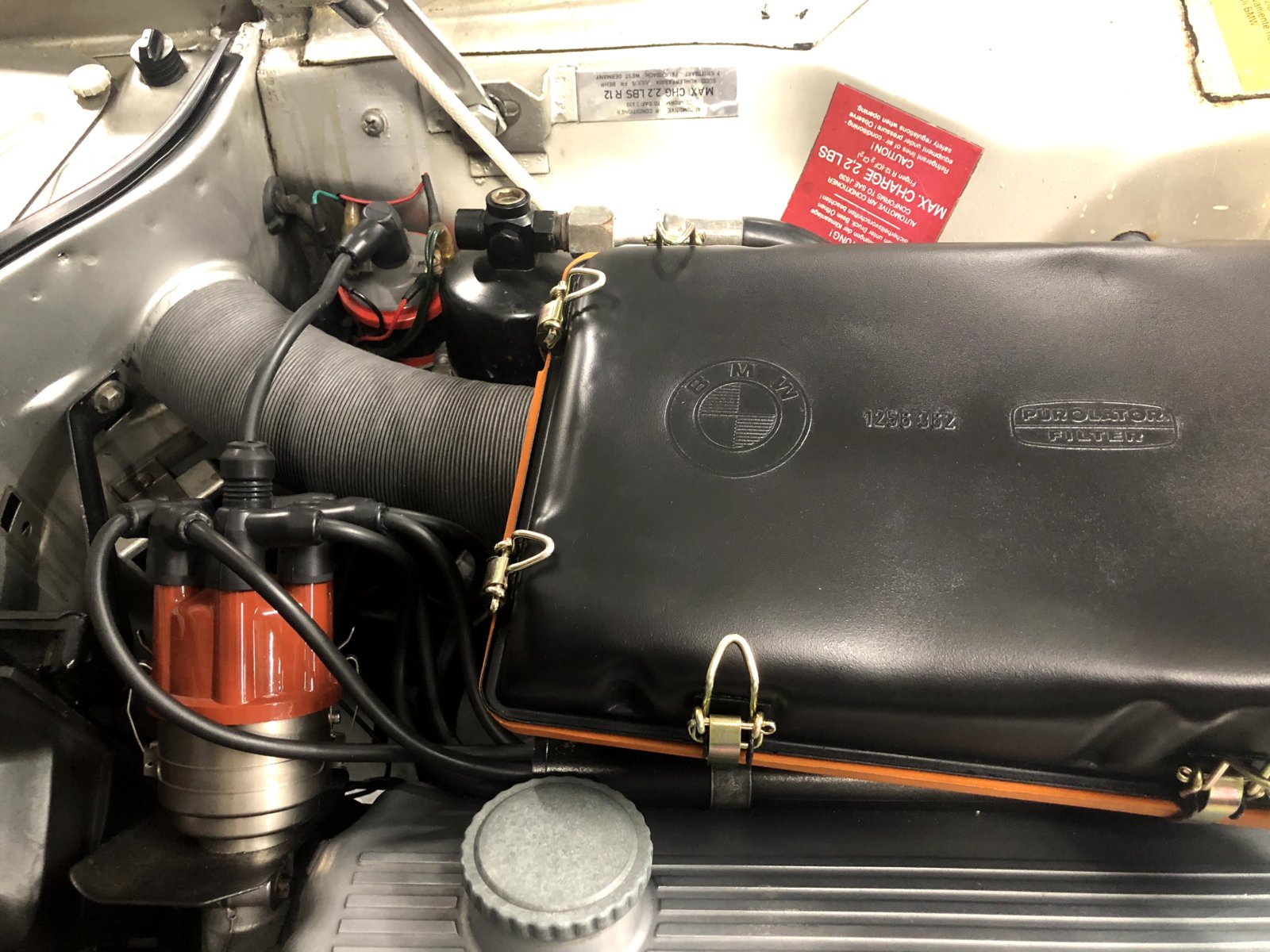 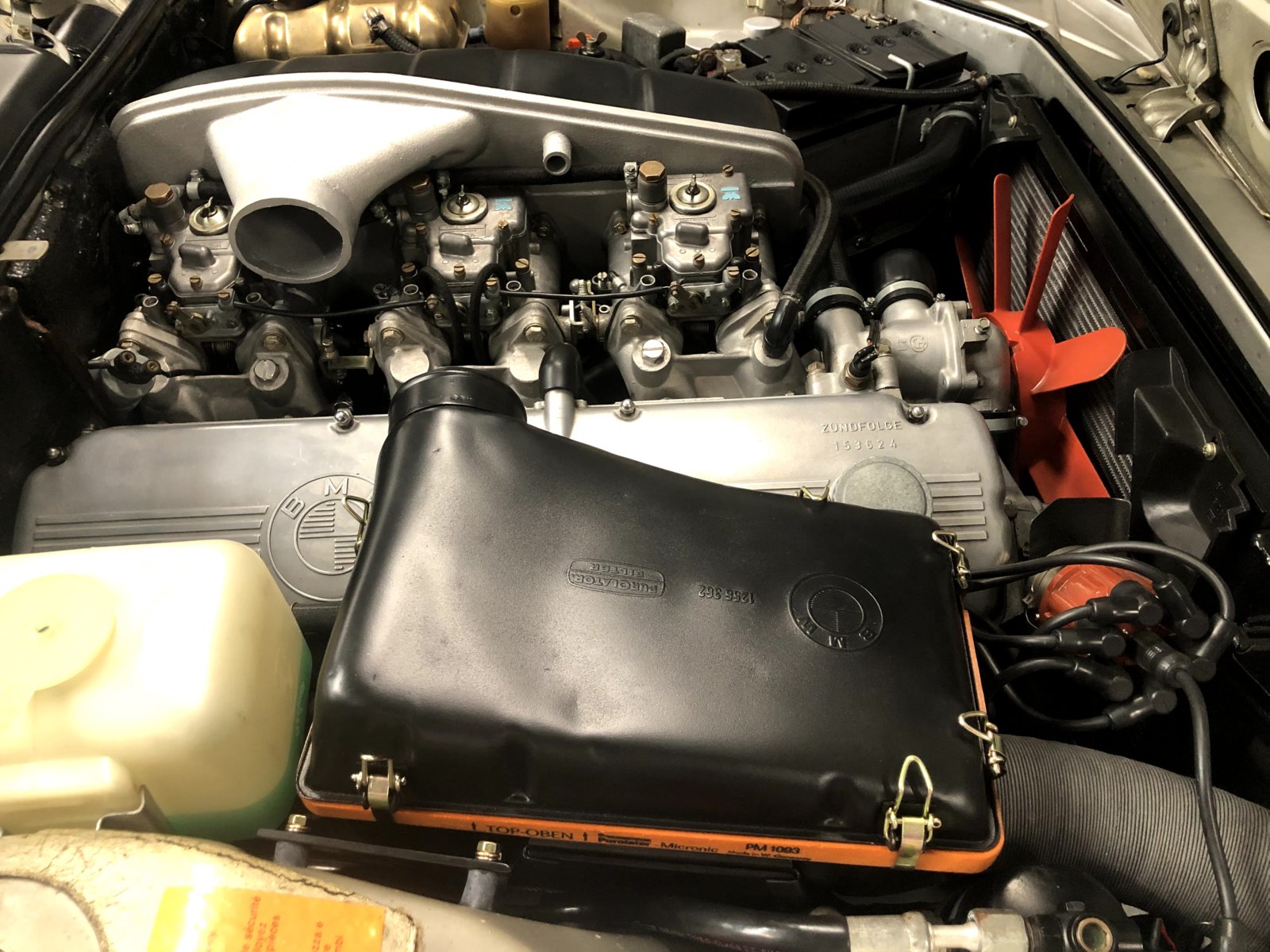 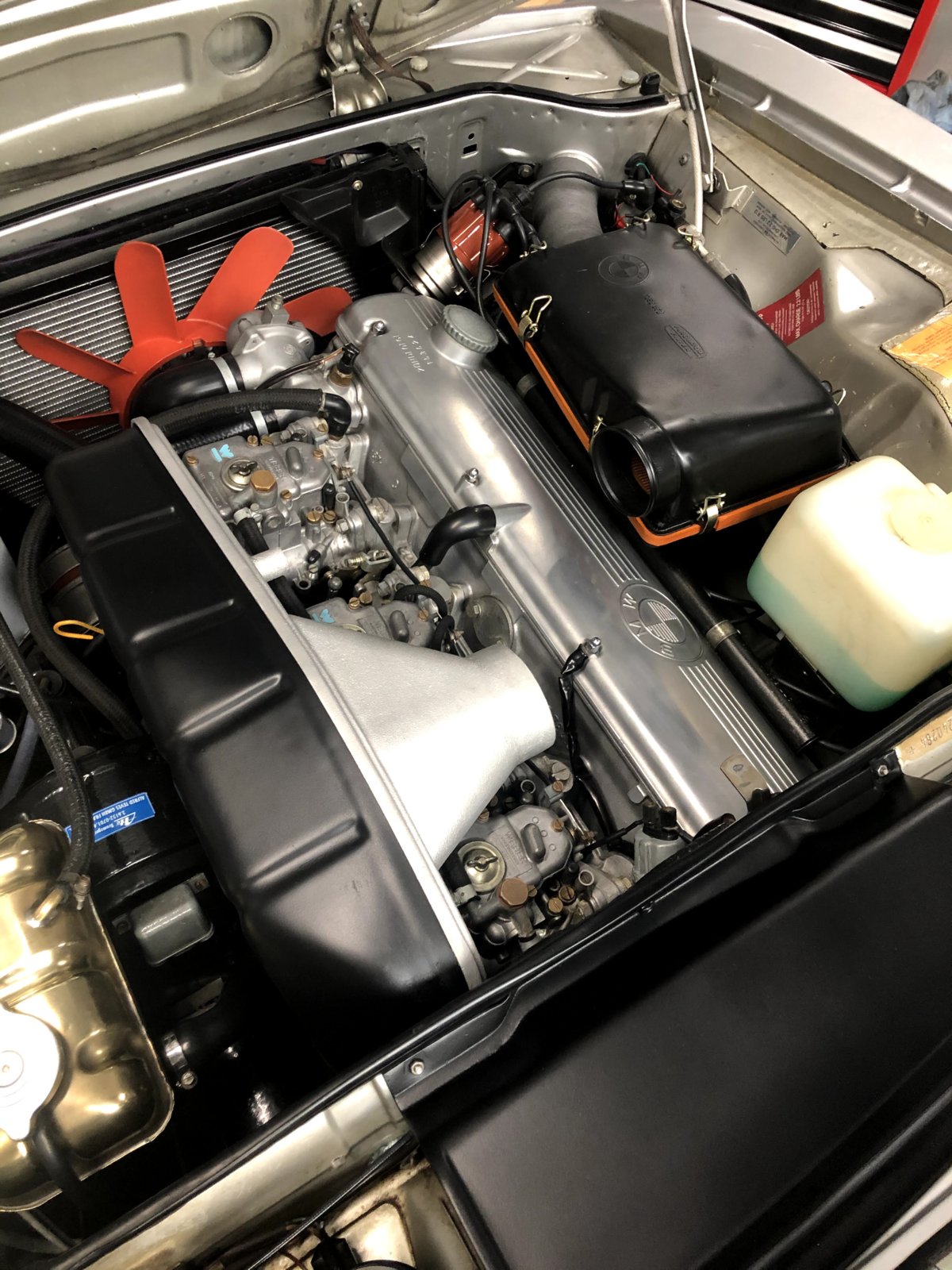