Last Sunday we had a nice day in Michigan so I finally got around to installing the Lokari fender liners I bought a while back.
I have a new set of the Volvo plastic liners but I liked the Lokari's better and so I went with them. It took me about 30 minutes to install both sides with a cig in one hand and a beer in the other.
The fit is quite good and I think I will be able to remove easily for periodic cleaning. 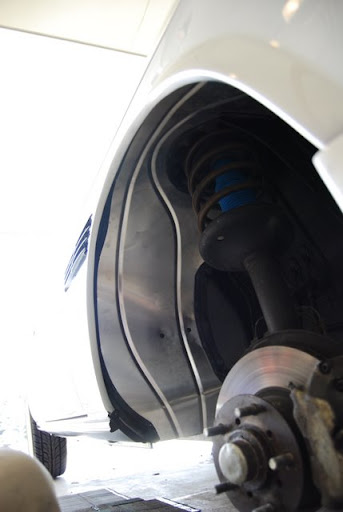 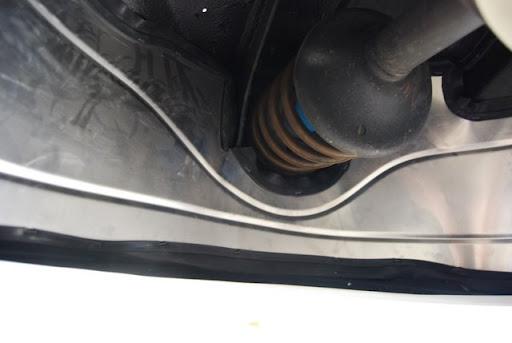 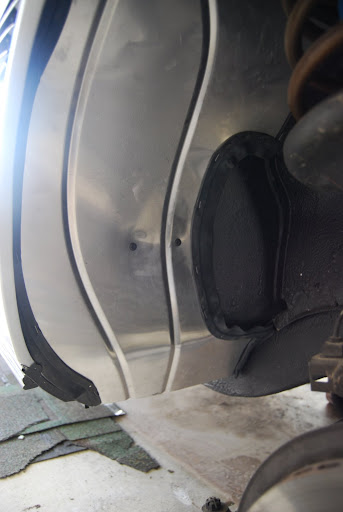 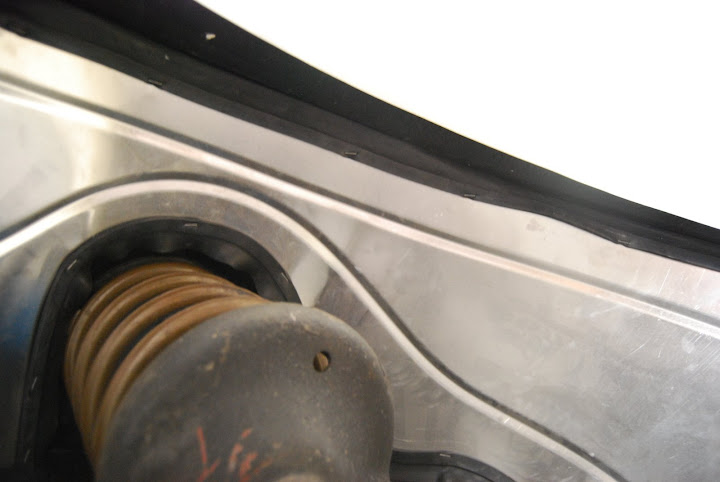 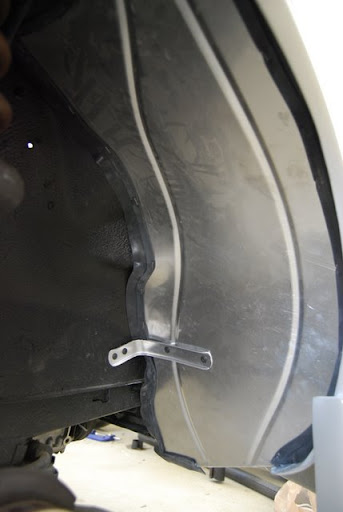 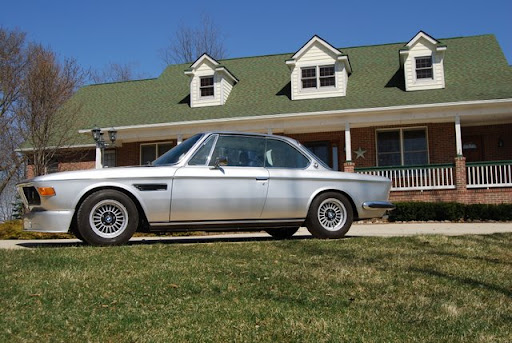 I also mounted my Alpinas. I recently bought a set of open lug period correct BBS 16 inch wheels but I need to get the longer lug studs in order to mount them and don't have the extra scratch now so I am going with the Alpinas (14 inch) for now.
C

Just my personal opinion, but those are just another way to trap crap inside the wheel wells, something I thought Karmann had a lock on. Anything in the wheel well, including Volvo liners and the steel panels with a rubber seal on the edge that Karmann put in the rear of the wheel well just serve to accumulate crap that will ultimately rust from the inside. You've just added something you have to remove to clean the wheel wells. Leave everything out of there and keep them clean and free of debris.
J

I've been told that many times and it may be true but I am banking on these working better than the original configuration. I intend on removing the liners every so often to clean out anything that gets behind them but I think they will provide a pretty good seal for the usual crap from the 400 yards of dirt road that leads to my house.
P

I'm with Dan on this one. Kind of an affectation. Bling with no real function. Sorry, just an opinion. Your car.
M

As always 2 sides to any argument.
However I am in favor of some kind of liner because it helps to stop mud and dirt being blasted by the tyres into all those delicate rust traps we are so fond of.
When the bucket is finally rebuilt I will use plenty of underseal and cavity wax behind the liners that way hopefully the rusting will be kept at bay.
Just my opinion
Malc
J

I chose not to replace the stamped OE metal piece with the rubber gasket when I replaced the fenders because I thought it would be a trap for dirt and other junk. This liner should keep most of the dirt from flying directly into the depths of the fender behind the A pillar door post. There is about a 1/2" clearance between the back of the liner and the inner fender area so hopefully anything that sneaks behind the liner will just fall out on its own.

Jcat - how about a report after a year and drive in as much wet crap as you can find. I've thought about just covering the opening into the "sand box myself.

the car has not seen rain or wet roads since I restored it and I don't plan on changing that. Since I finished this coupe I have developed a serious fear of rust...
A

jcat said:
This liner should keep most of the dirt from flying directly into the depths of the fender behind the A pillar door post.
Click to expand...

I agree. Good luck cleaning sludge and sand out from this crevass if you don't have some type of protection if driving in the rain/snow/mud. I found packed sand deposits as far in as the interior of the A-Pillar when doing the interior. Also the inside of the rockers were packed solid (thankfully dry). If this stuff gets wet it will hold moisture like a sponge and rot your metal faster than anything!

I used a flexible 2' drill shaft and wire brush on the end to clean out the rockers, blew them out with an air hose and treated with metal ready & POR 15. How are you supposed to get in there to clean them regularly (as coupeguy said)? When sand and mud becomes liquified, it finds all sorts of creative ways into your bodypanels. At least fender wells will keep the debris from being forced into these cracks from wind and centrifugal force of the tires etc.

I was looking at your liners thinking how I'd like to have something to protect this area, as well as the power antenna module....but then I remembered that she doesn't see any wet weather - so why bother.
J

I think the key is to occasionally remove the liner and air blow anything that somehow makes it beyond the liner. If I do that I think the liners will be a big help.
Kind of like a trojan, maybe not 100% protection but surely safer than no protection at all.
J

just by pure happenstance, I spotted the Lokari fender liners on the CSL that sold in Germany last October. At least I know I am not the only one...
J

After a couple of weeks of driving with the fender liners in, I decided to pull them and inspect the inner fender wells. The inside of the fenders were totally debris free. It appears that so far the fender liners are doing their job.

jcat said:
At least I know I am not the only one...
Click to expand...

No, these fender liners are actually really good.

I had my donor car (E3) taken apart and the only area not eaten by rust was behind the fender liners (Lokaris). That car was a daily driver at all seasons

Now I have them installed on my car instead. A layer of black body coat makes the fender liners "invisible"

How do you attach them? I see the L-bracket, but did you just sheetmetal screw them in there, or what?

I have fender liners on my car and wouldn't dream of removing them despite the fact that some people consider them to be a trap for any dirt that gets behind them, they are probably right but if the dirt stays on the right side they can only be a good thing. I used 5 litres of cavity wax working from one A post round the front of the car to the other A post and then installed my liners. Sadly living in the UK my car does get wet from time to time so I consider them a necessity.
T

I´ve had those liners on my E3 for 2 years now (maybe even longer, they came with the car) and I drive the car year round, in all weathers and condtions (it´s my only car).
Occasionally I take a peek behind them to see inside the cavity (that is of course allso liberally protected with wax AND grease). NOTHING gets trapped behind them because, we´ll how the hell would anything GET behind them if they are mounted properly?
The Lokaris are a very renowned and well respected product. When the car companies got more serious about rustproofing (in the late 70s, early 80s), they all simply copied the concept. Only in plastic, because its cheaper and lighter (the Lokaris are alloy because it´s cheaper to do alloy on a small batch than plastic).

The principle was invented by the scandinavians btw, who figured out that shotblasting the inner fenders with dirt and salt throughout the winter was a pretty shurefire way of killing your car in less than one (long) winter.

Trust em, they now about preparing cars for bad conditions (and the Swedes for instance had to make their cars last since taxes made new cars hideously expensive).

Anyone dismissing the fenderliners because he thinks he knows better should have applied for an apprenticeship at karman in the early 70s. He would have fit right in with the people who thought that drilling the holes for the beltline trim AFTER the car had been painted was the right way to go...
J

Thanks for all of the information everyone!
I mounted them in front with the bracket and by screwing stainless sheet metal screws in the rear. I used a rubber mallet to form them in a spot or two but other than that they fit perfectly.
C

Where can those liners be bought?
T

I bought them directly. The guy, ( I forgot his name ) was very helpful and he shipped them to me very quickly. The Lokari's are more expensive than the volvo fender liner option but you don't need to do any modifications since they are made for the CS and that for me was well worth the price difference.
You must log in or register to reply here.
Share:
Facebook Twitter Reddit Pinterest Tumblr WhatsApp Email Share Link
Top