Hi Team. I set out this year to find a replacement evaporator for the AC systems in our E9s and E3s (and E12s and E21s).

I found one (originally made for a 2007 Land Cruiser). It fits in the original box pretty well and it’s in my car working now. I’ll show you how I did it and then update you at some point in the near future as to whether there’s any advantage to it over the original parts. This is a work in progress and you are joining me in the experiment!

I want to emphasize that many members on this board have made their AC systems work pretty well using the original BMW parts and that if you are in need of better cooling in your car start with the basics by making sure your system is charged with the correct amount of oil and refrigerant; making sure that you’ve cleaned the bees out of your condenser; inspecting your switches and wires; checking if the seals are still there on the little flappy doors inside your heater box; and seeing to other correctable things.

On the outset, I wanted to find an evaporator upgrade method made from cheap, commercially available, and reliable parts that could be shared as a DIY guide that anyone could follow. How’d this turn out?

Is it an upgrade?: TBD
Is it cheap?: Pretty affordable I guess. See the spreadsheet below.
Is it reliable?: I already feel better knowing that the connections have o-rings, not copper washers.
Are the parts commercially available: Most yes, some no.
Can anyone do this?: Yes, except for a few parts which are hard to fabricate. Read on.

Here is the stock evaporator box with its big tube-and-fin evaporator. 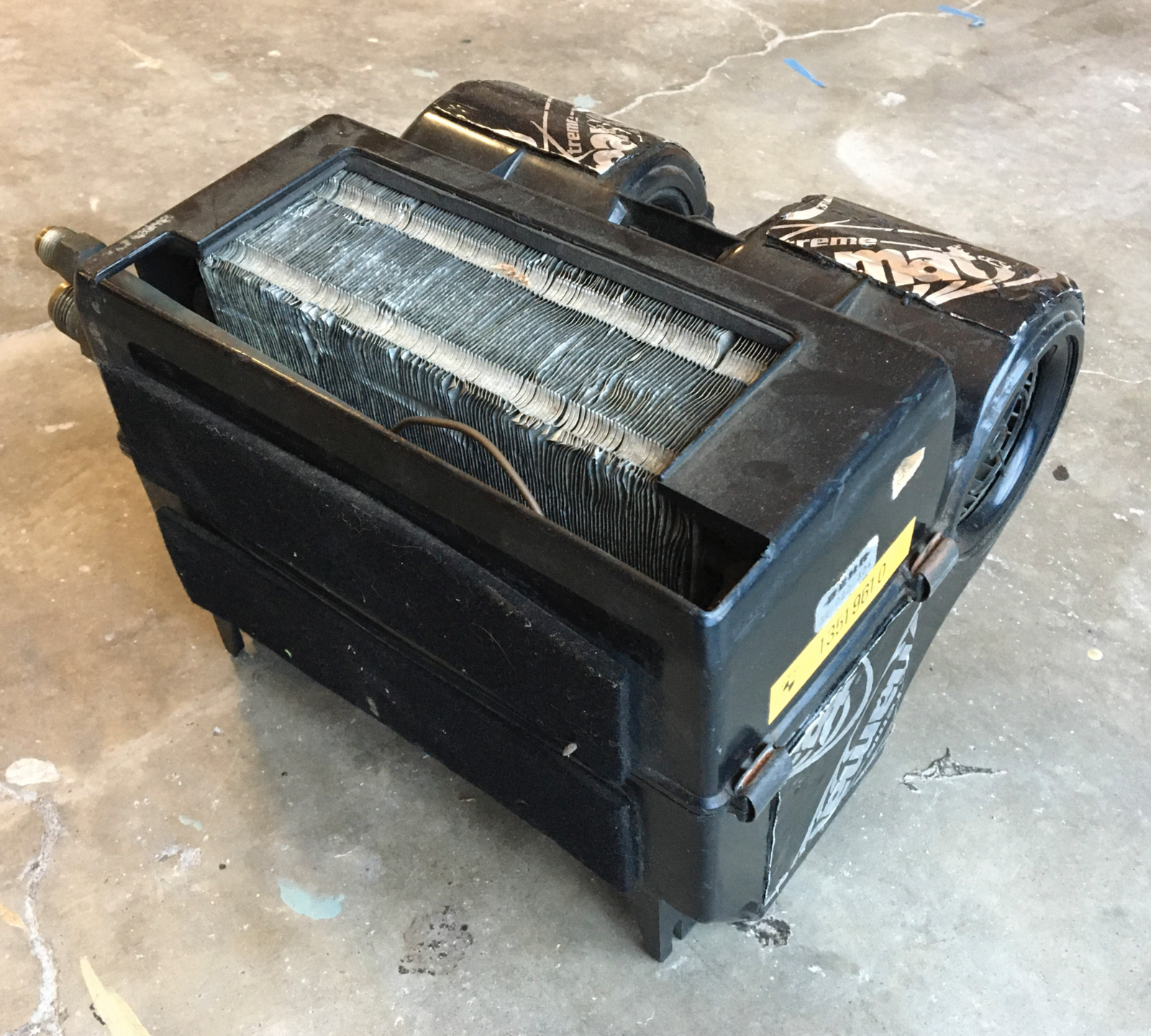 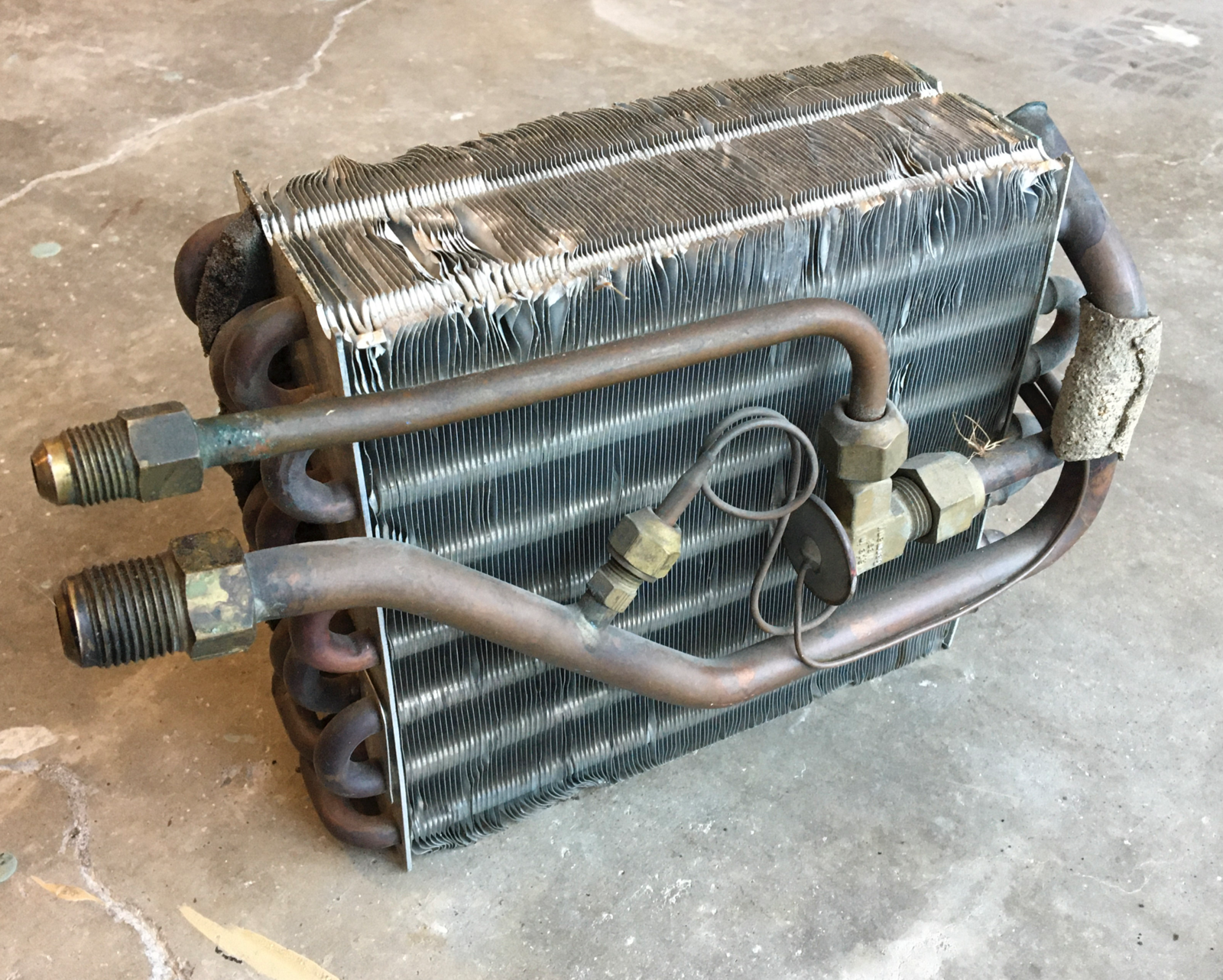 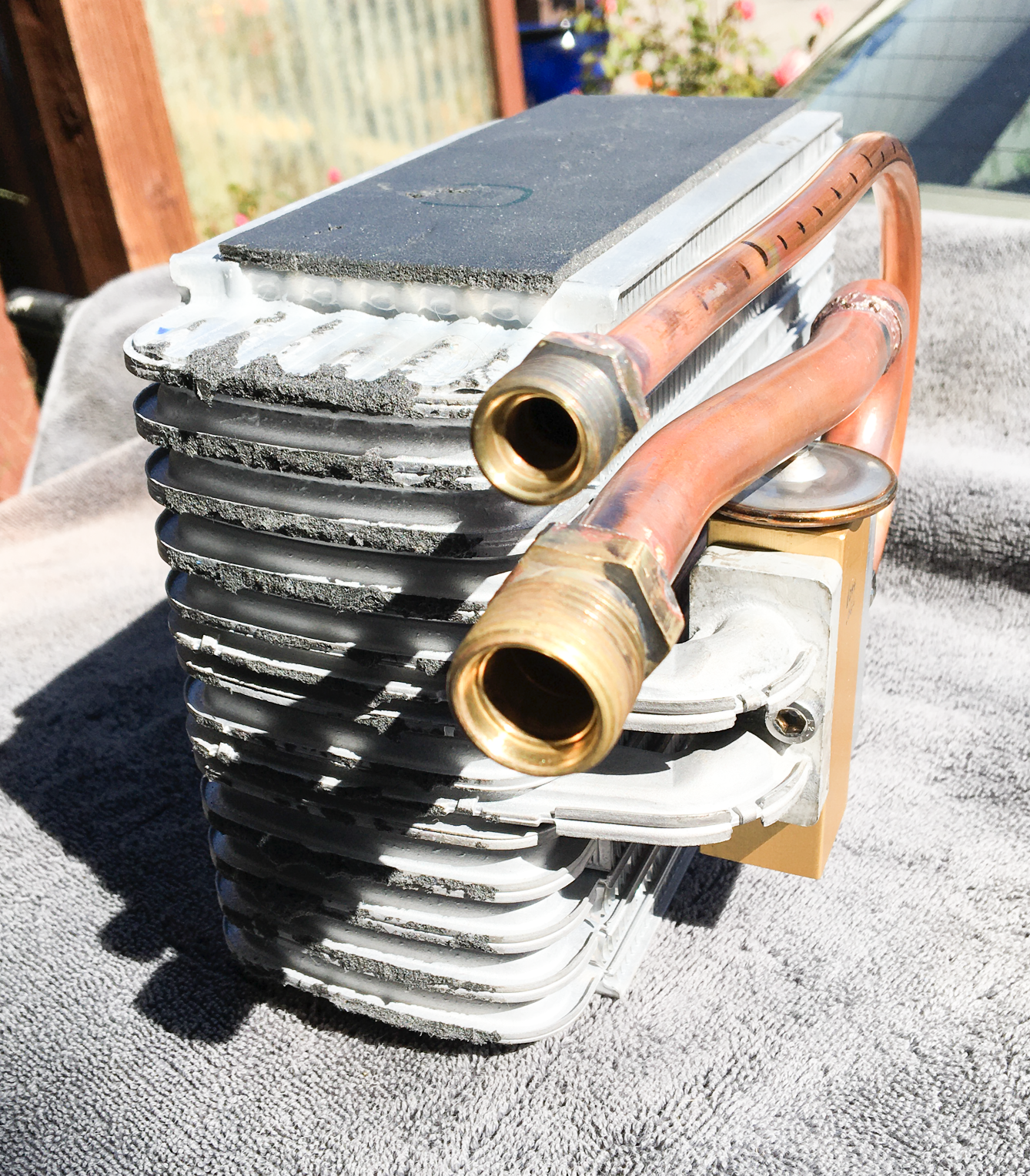 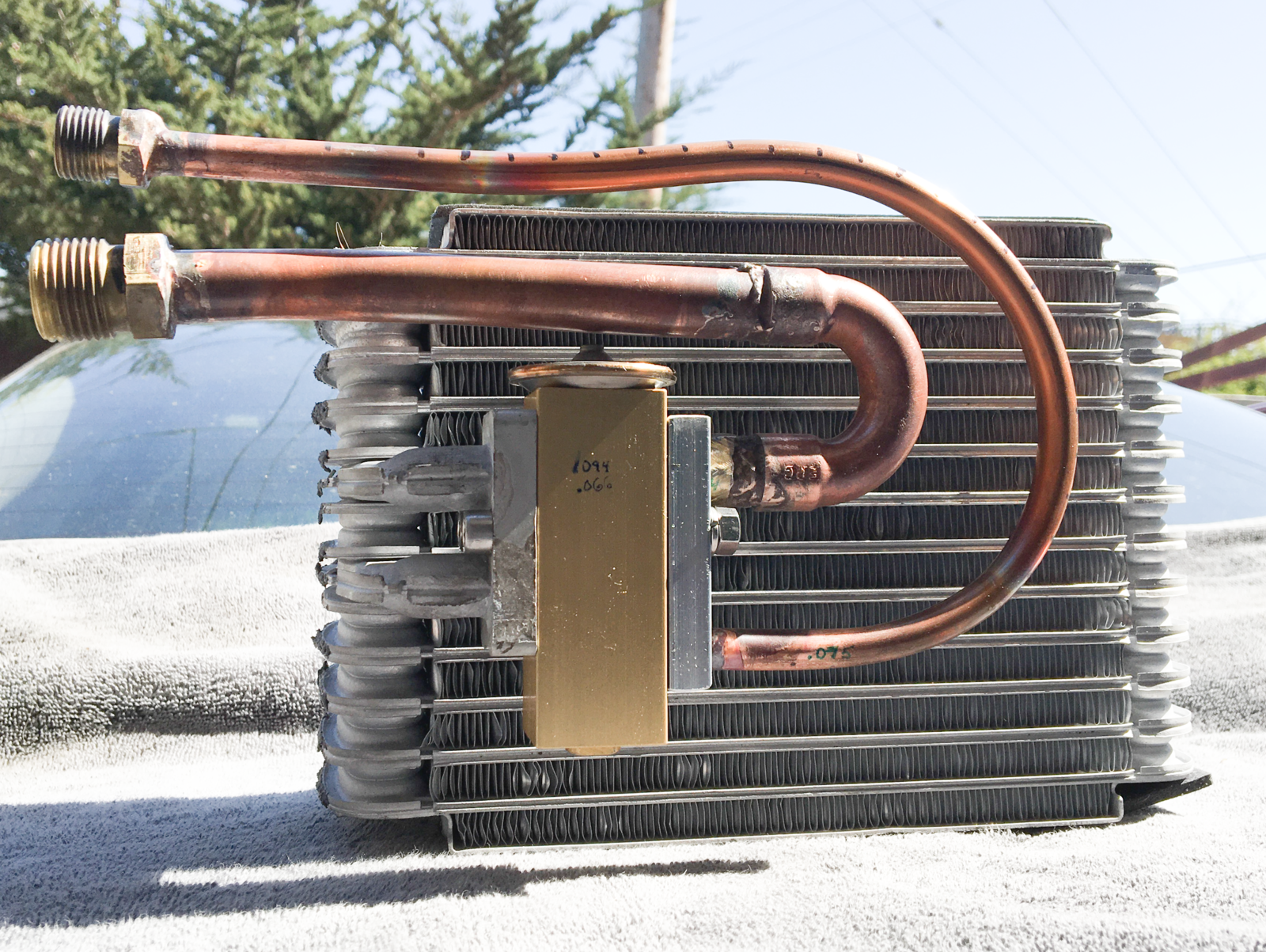 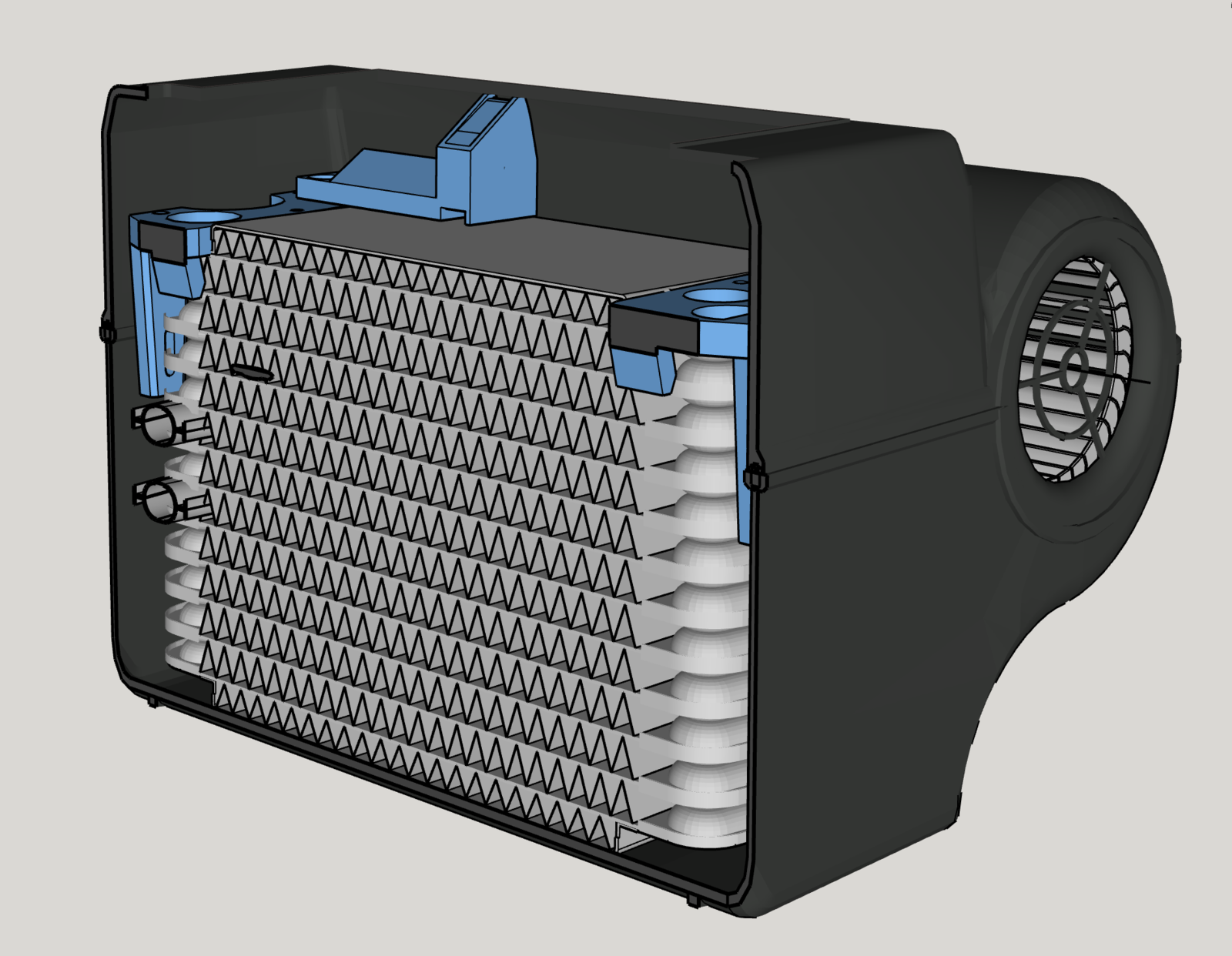 Below are all the parts needed for this conversion as well as a source for them (in the spreadsheet). This assumes you have an original AC box with a working blower assembly and that you’re willing to modify the box. 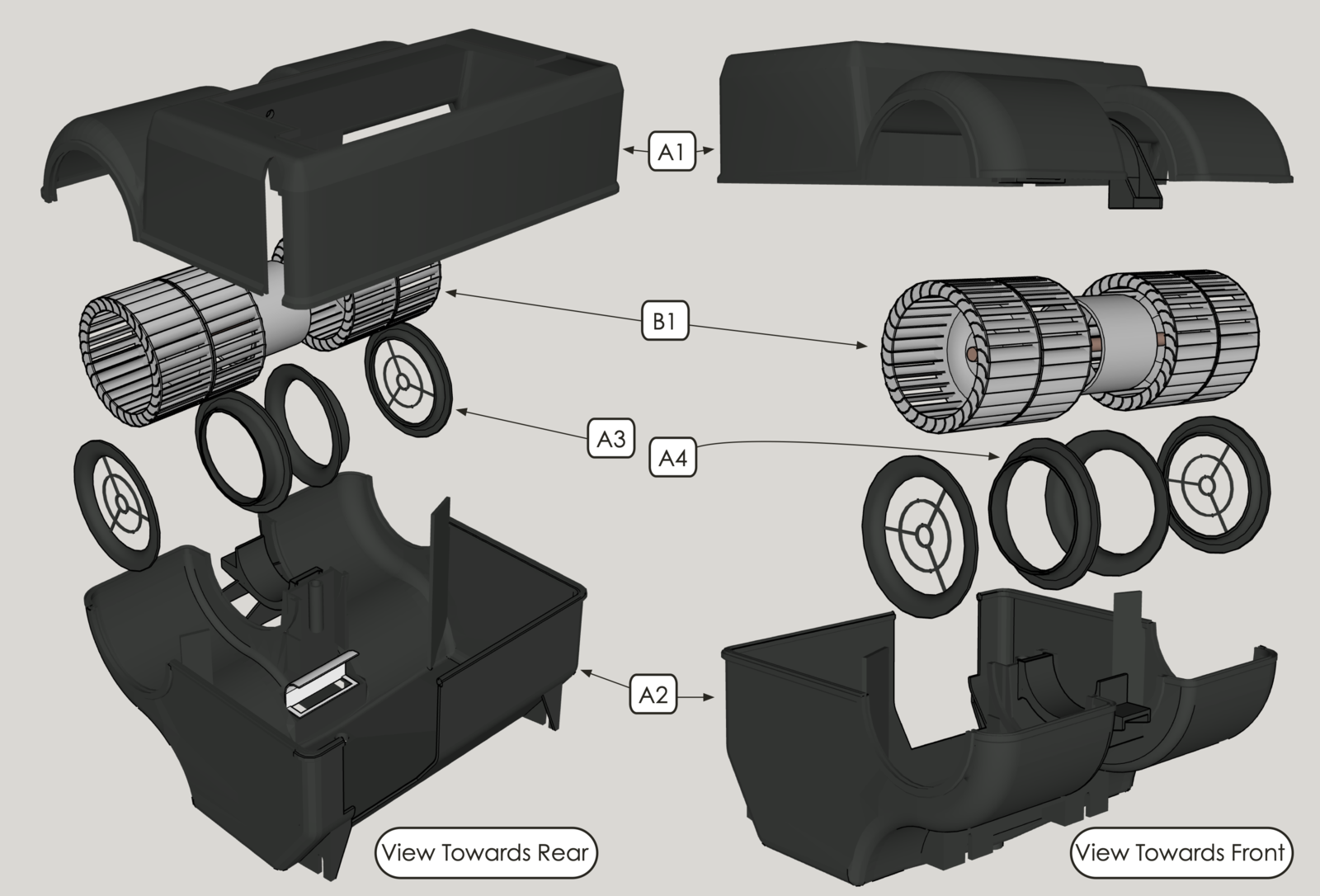 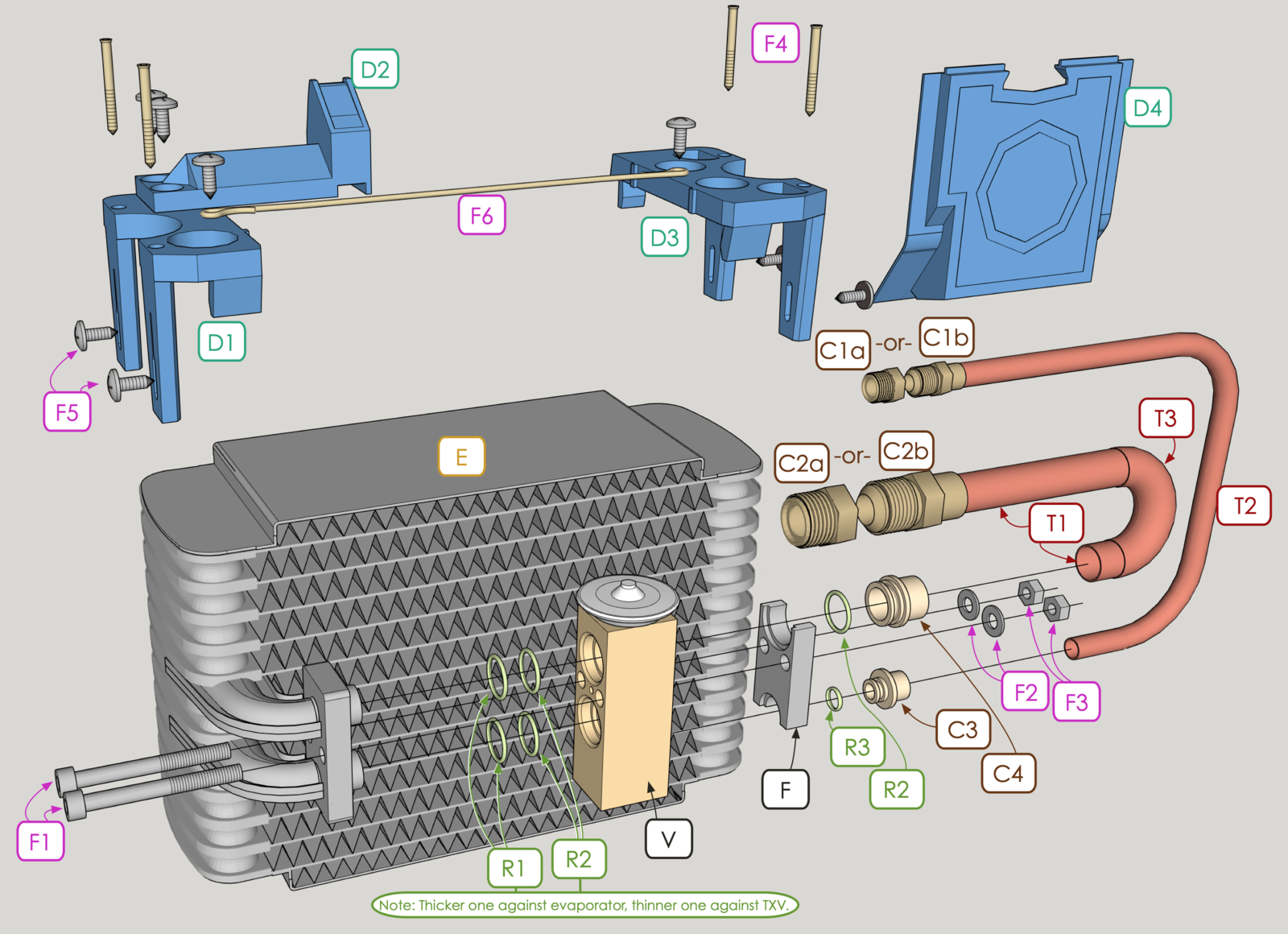 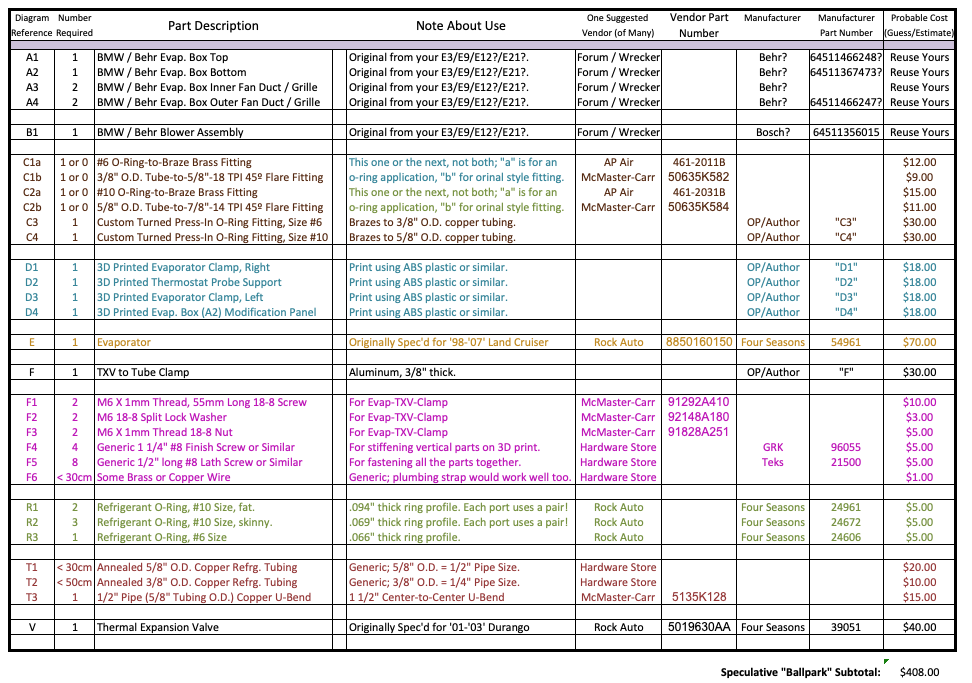 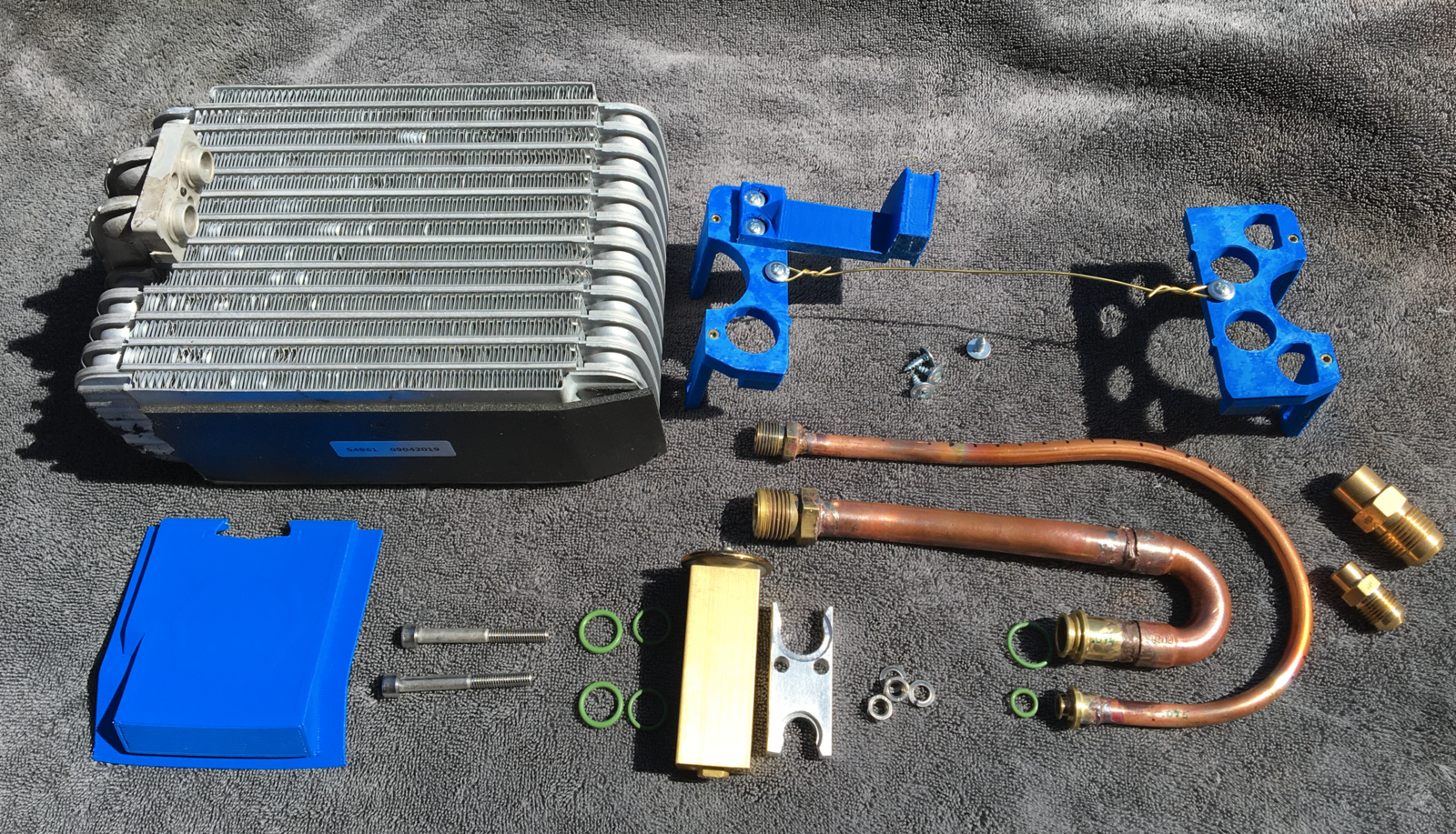 Here is the kit assembled and in the box (top view): 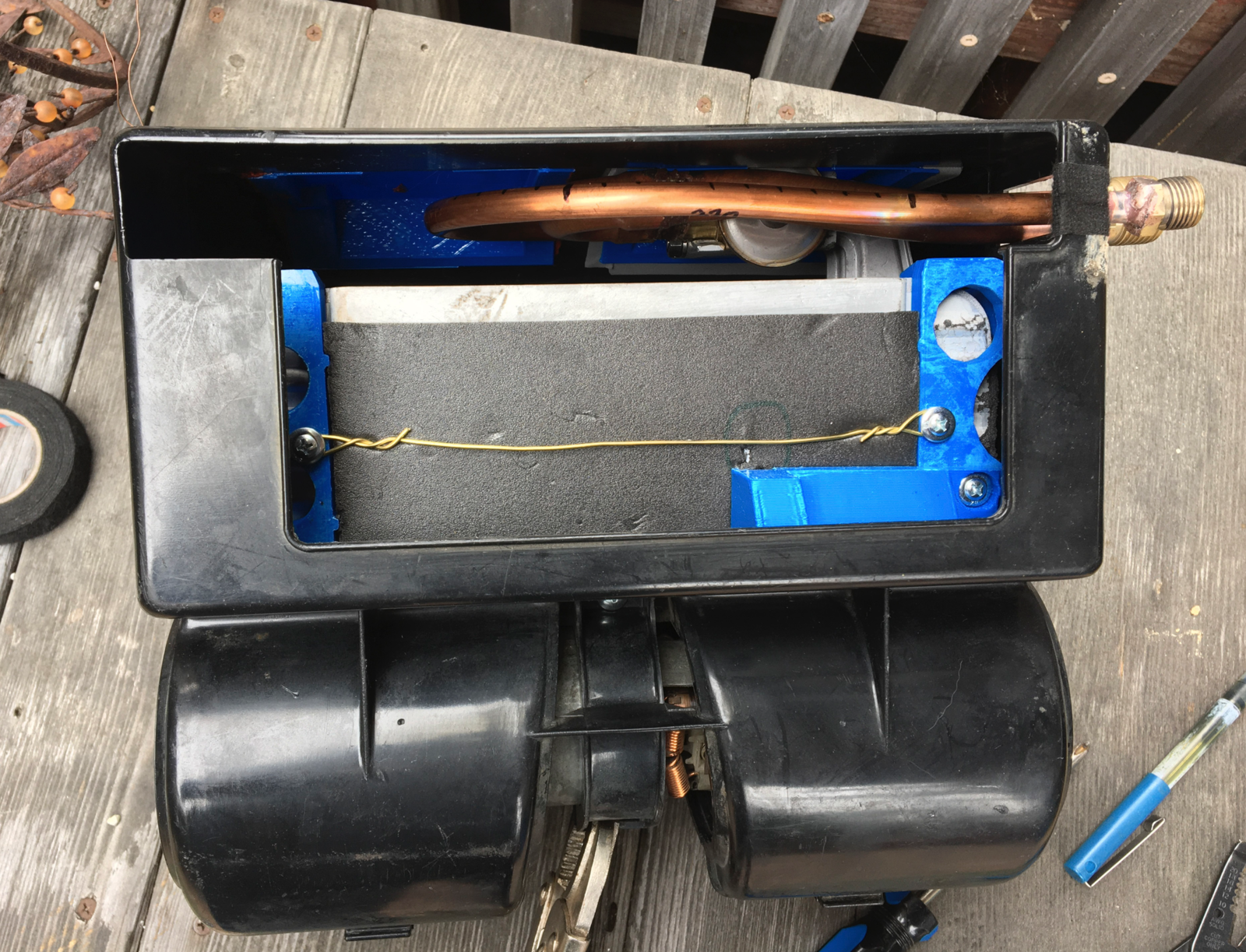 I’m pleased! It’s been cloudy but I got a sunny day today finally. I got a chance to run the system starting with an interior temperature of 107º. I was measuring temperature drops (measurement of air going in minus air coming back out) of as much as 35º as the cabin cooled down. I’m going to keep tweaking some things to see if I can get more cooling.

I didn’t make any modifications to the blower even though it is probably the biggest limitation in this system. I’ve determined that the blower (with whichever evaporator is in the box) makes about 190 cubic feet per minute of airflow. If I’d found a way to switch the blower and the evaporator at the same time in this experiment there’d be know way to know which made the bigger difference.

I wanted this to be made completely from parts anyone could source. The 3D printed stuff I’m kind of excusing here since there are probably dozens of ways to secure an evaporator in a plastic box and 3D printing was just the easy way for me. Also, I can share those files with anyone who wants them.

As far as the fit of the new system, it was kind of a bummer that the TXV interfered with the back of the box since it was almost a perfect match. Have a look at this cross section: 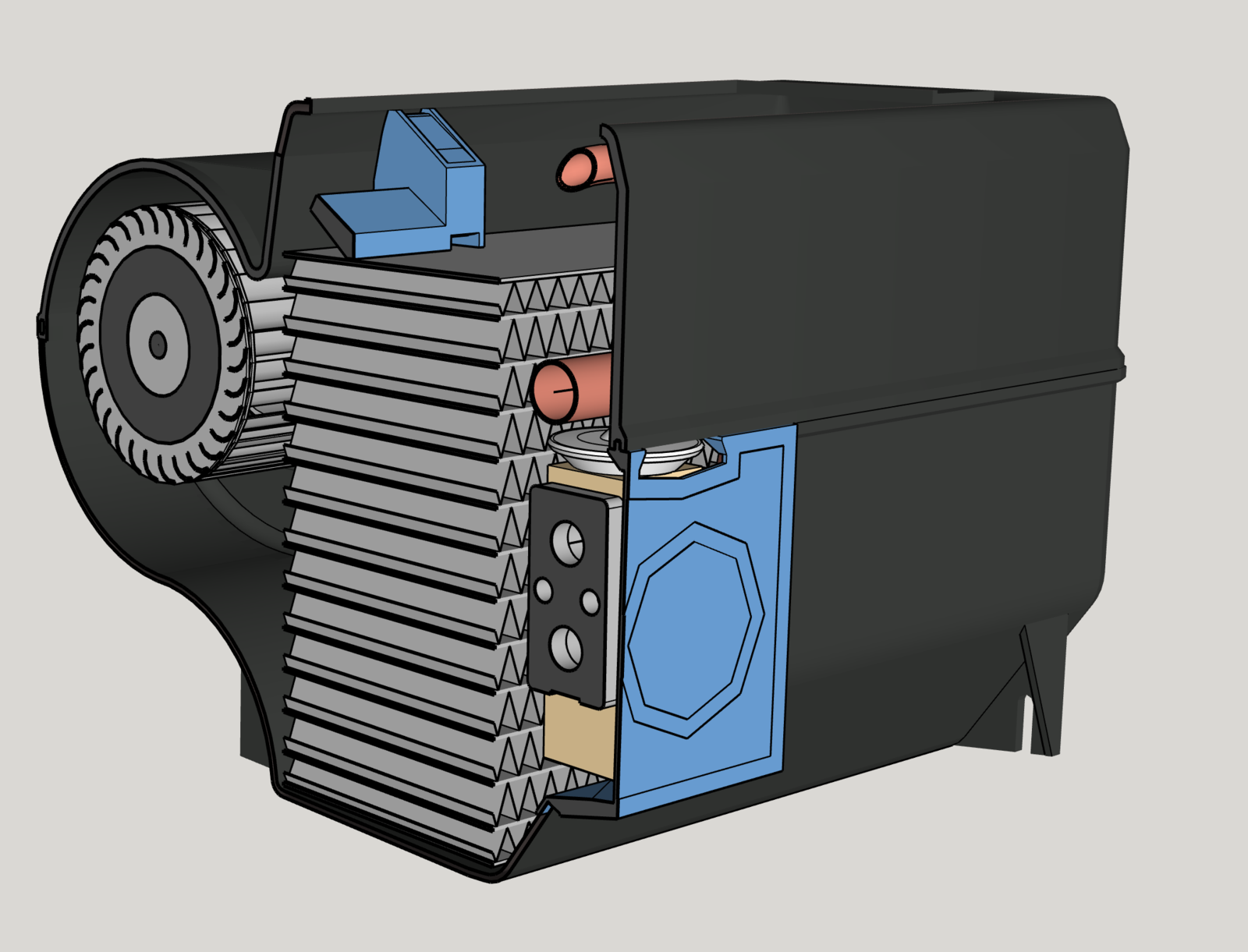 View from the bottom of the valve and the box cutout: 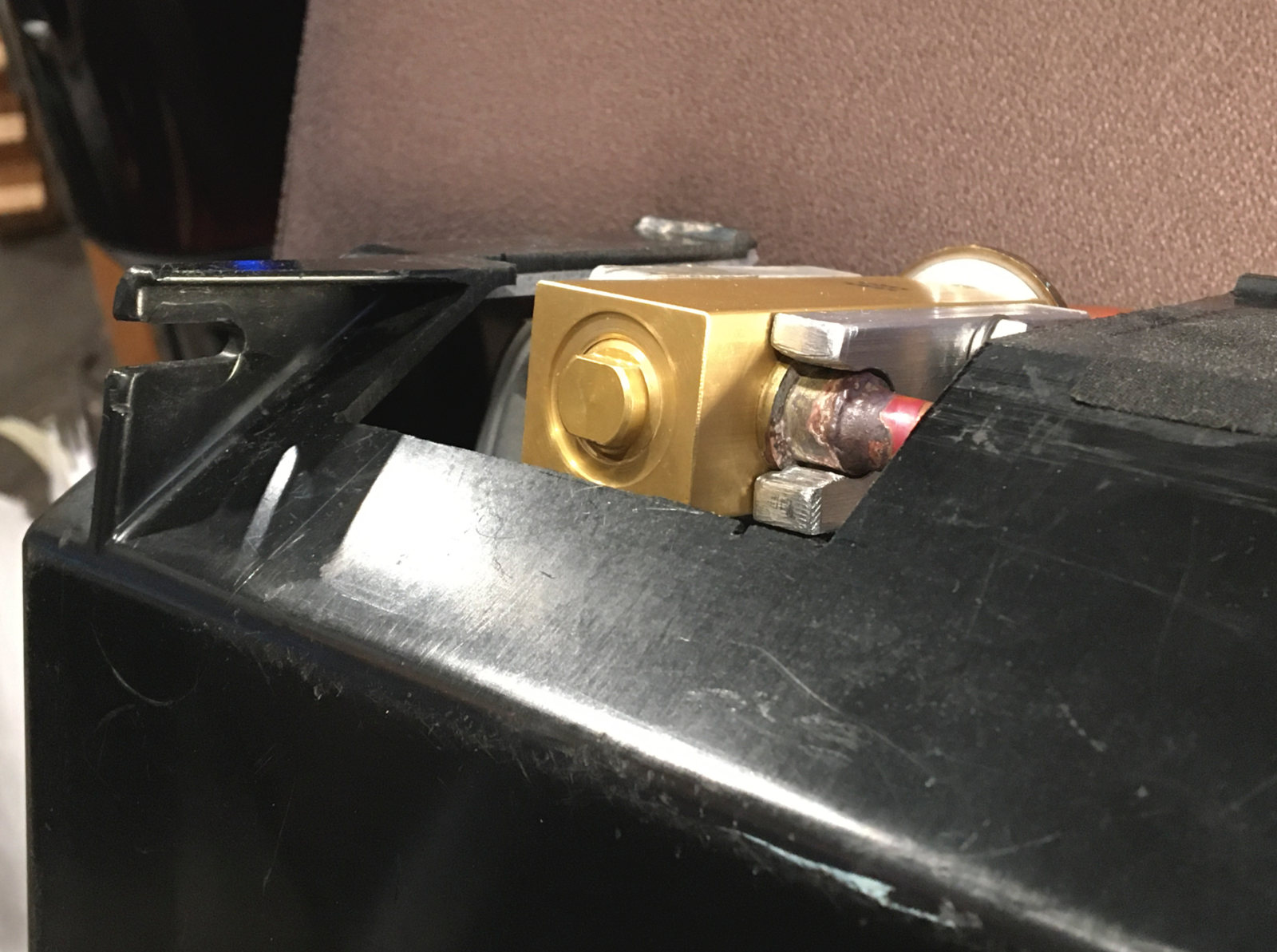 A window shaped like this needs to be cut out from the box. Aside from that, the only other modifications to the box is a few screw holes. 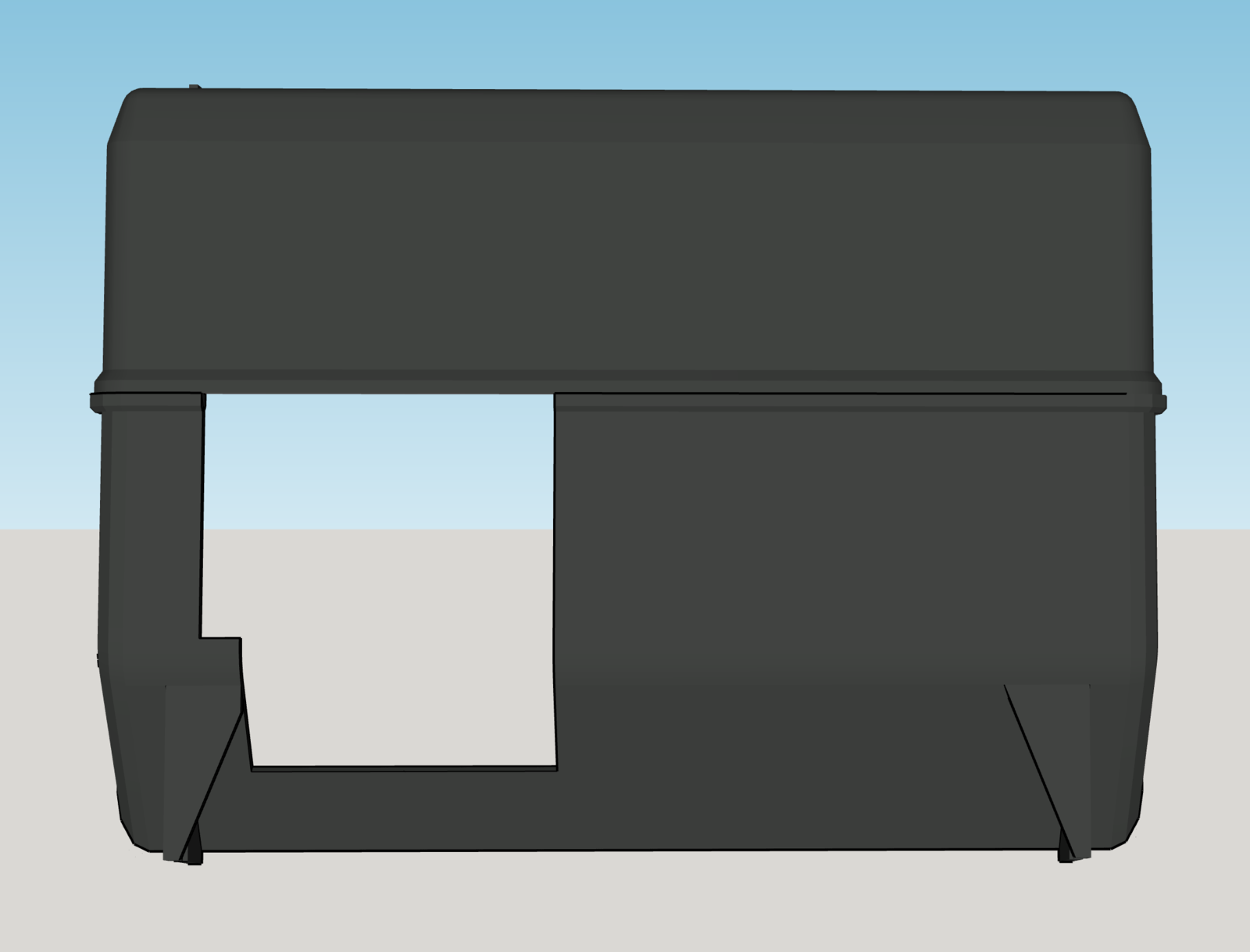 The blue plate (part D4 on the illustration) is a shell that makes a little more clearance around the TXV (particularly at the bottom) and also collects dripping condensate and returns it to the bottom of the box using gravity. I have it installed pressed against a foam seal and I’ll be checking it periodically this summer to make sure it doesn’t leak. It could also be glued in with silicone.

The real missing link I couldn’t find on any website was an adaptor from that particular TXV to an O-ring-stye connector and a clamp to squeeze them on. I’m referring to parts C3, C4, and F on the diagram. I made the adaptors on my little lathe and brazed them to tubing. 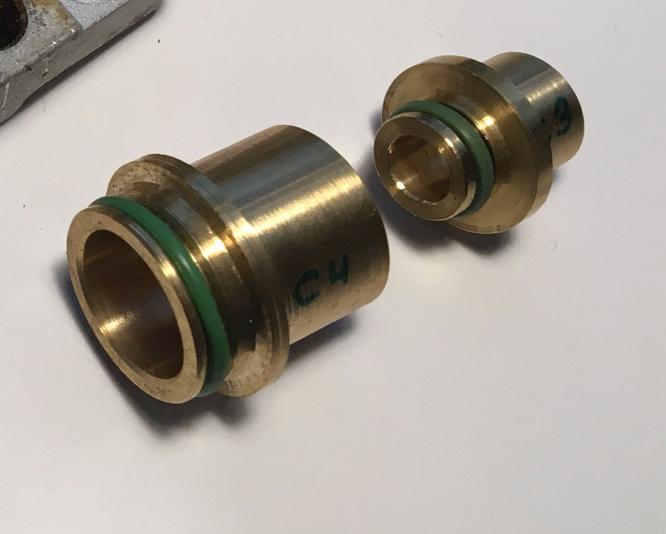 This was my first time brazing. It seems to have worked well but I know this option isn’t easily available to everyone at home.

Presumably I or someone more experienced than me could make this assembly into a kit if the DIY route is too confusing. Also, I took all the pictures needed for a full "how-to" guide. But I think anyone with enough ability to take their box out of their car and / or charge up an A/C system should be able to assemble this.

I have enough parts for another prototype if someone with time on their hands wants to reimburse me for just the parts and postage. All I’d ask is that you’d be able to compare this system with the previous one in your car and report back for everyone’s benefit.

Anyway, it can now be said that someone has used a non-original evaporator in an E9. I’ll post a critique of the function soon. So far so good. Thanks for following along!
Last edited by a moderator: Jul 13, 2021
Click to expand...

I've not had my dash apart, so I am probably not the best person to address this, but I will toss out a couple of comments here, hopefully to get the ball rolling.

I think the heater box is self contained, with a fan to blow air over the heater core and to either the floor or the defroster (or partially onto both).

The a/c box is a separate box, which taps into the "vent" system. The "vent" system was originally designed merely to allow outside air in through the two vents in the middle of the dash. This could be operated in conjunction with the heater, to pass cold air over the driver's face and keep him alert for example, or separately.

I suspect BMW tapped into the vent system in order to make sure the colder air flowing over the a/c evaporator did not have to pass over heater core before entering the cabin. And I suspect "packaging" all of this within the available space was another reason for this setup.

So, my thought is that some modification would be required to join the heater and a/c box. This might be something that was left in place all the time (in which case some of the output from the heater would flow through the center vents), or rigged up with some mechanism to close off the connection.

All of that said, a more powerful blower likely would make a big difference, even if directed through the existing vents.

With vent closed you in essence have recir, with it open you get outside air which will be warmer theoretically than air in cabin.

HB Chris said:
With vent closed you in essence have recir, with it open you get outside air which will be warmer theoretically than air in cabin.
Click to expand...

I think it’s the “Air” lever (on the left) that has to do with outside air. That’s the one with the rheostat. The “Vent” lever (on the right) controls whether air can move from the heater box to the dash duct, right? Both boxes dump into that duct.

You are correct, when fully to the left all outside air is stopped according to the manual. But, the lower right is called a cold air lever and shuts off cold air completely. Opening it sends air to the center grille. In essence heated air can go to feet or defrost while cold air is coming from the center vent. Confusing to say the least.

Wanted to let everyone know I'm the proud recipient of Blinkling's #2 evaporator (so memorialized by him on the case) and it works fantastically well! I'd been working on various engine cooling and AC issues this summer and had replaced a lot of components (all the big AC equipment except the original evaporator and valve), radiator, fan clutch, numerous hoses, thermostat housing and thermostat, water pump, condenser fan and the condenser fan thermostat switch. I also fabricated an aluminum shroud between the condenser and the radiator to focus the condenser fan and installed an electric heater bypass valve behind my 3.5 L motor with dual Webers. Thanks to all on the E9 forum who helped me navigate this (specifically Blinkling, Stevehose, sfdon, teahead, Ohmess, pickman, HB Chris, Layne, etc.) and patiently answered my idiotic questions. I started out as a complete newbie with some time on his hands and a desire for a working AC system.

With all new AC equipment and the original evaporator and expansion valve (which had been cleaned and tested), my high pressure readings were all over the map and the temperature never got below 50. The last time I tested it the vent temps went to 50 and then back up to 60. High side pressure was headed to 400 psi. Ugh.

I reluctantly (and I mean reluctantly because it's a PITA) disassembled the middle console again, extracted the original evaporator and contacted Blinkling. He sent his new evaporator and expansion valve assembly a few weeks later. I installed it over the weekend and charged the system. Now, as soon as I turn on the AC, the temp quickly drops, and drops, and drops. I stopped a few tests at 30 degrees (I let it go down to 29 degrees on one test just out of curiosity) before easing the vent temp back up. We'll see what happens when the temp and humidity are high again but at least now I know the system will definitely cool. With the Sanden, you hardly know the compressor is running and the engine temp stays steady.

If anyone has questions on any of this, let me know. But working with the E9 forum and Blinkling has been a privilege and a lot of fun and his evaporator assembly gets the job done!

Hi ATL_Alan - Are these babies for sale? And if so, would you mind sharing with us how much they cost?

You'll need to ask Blinkling; I had the new evaporator and valve already and just sent everything to him (neither is expensive). He did all the fabrication and sent me back the finished assembly. Since it was experimental, he billed me for his parts and shipping. Very professional looking and he's great to work with.

Man, he should definitely make this a regular service!