Getting this 3.0CSi back on the road

Gransin said:
Not much happening here, had our second child last spring so that put a serious halt to everything car related but I'm totally okay with that
Click to expand...

Excellent work as usual, Robert. Both in the bedroom and in the garage!

Lots of fun car stuff going on there!

Dealing with a man flu, but I couldn't resist to go out and test fit the new 14" wheels this evening now that I got the new metal center caps home. The lift is in the way but it was dark and we've got a fresh layer of snow, so that's the best photo I can offer.

I really dig it. 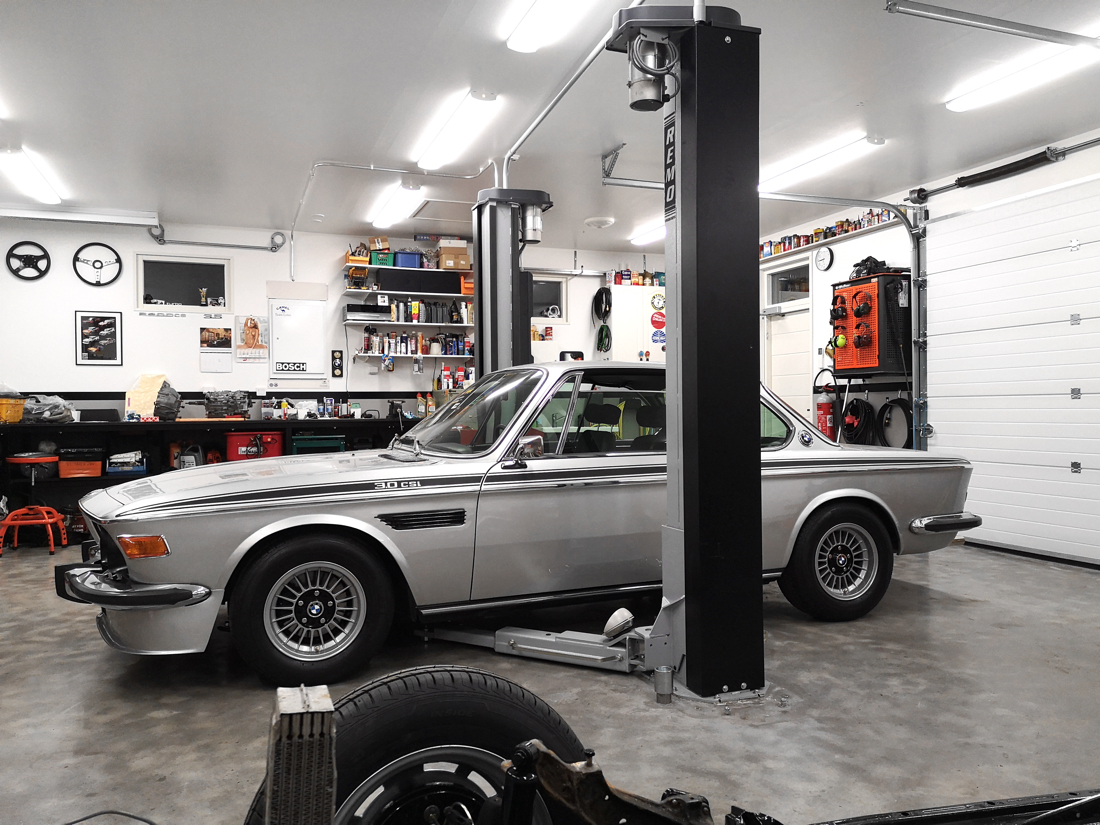 Nice! How does your wife like your calendar, Robert?

Man, nothing gets by this crowd!

Stevehose said:
Man, nothing gets by this crowd!
Click to expand...

Hard to make out from the pic. Looks like a full restoration with unoriginal parts.

Robert, great result! You should be very proud of this level of craftsmanship. Awesome work. In one of the photos, perhaps the one with your child in the front seat, I noticed the wood in the passenger door. Very nice. Can you tell us what this wood is, and perhaps who did the refinishing? Thanks, Mike

Thanks Bo! She's the one who asked me where all the nude/dirty calendars are when I didn't have one up (no kidding), and who am I to argue


bluecoupe30! said:
Robert, great result! You should be very proud of this level of craftsmanship. Awesome work. In one of the photos, perhaps the one with your child in the front seat, I noticed the wood in the passenger door. Very nice. Can you tell us what this wood is, and perhaps who did the refinishing? Thanks, Mike
Click to expand...

Thanks Mike,
The wood was refinished by Bela22 here on the forum, and it's zebrano with a slight reddish/brown tone and finished in high gloss. I wanted the grain on the door pieces to be at an angle because I think it looks better that way, the dash has the grain cut at an angle and then glued together the opposite way.
I can definitely recommend Bela, top notch work and result.
Last edited: Mar 7, 2020

The coupe is finally 5-speed!

Thought I should write up all the parts I used just for me to remember and maybe be of help to someone who's looking to swap.

Other things to consider:
I had to make two mounts to be able to bolt the transmission crossmember to the tunnel (see pics)
Because of these two extra mounts, I needed to shim up the gearbox by putting a couple of washers between the crossmember and the rubber mounts.
I didn't need a longer (automatic) speedo cable.
A DSSR + bronze bushings everywhere is nice, I finally got rid of much of the slop in the shifter.
The shifter hit the front of the console with my 147mm DSSR so I had to bend it even more than it is originally.
You need to make a new exhaust hanger, there's probably many ways to do it. (see pics)
Aligning the driveshaft is important and takes some work. 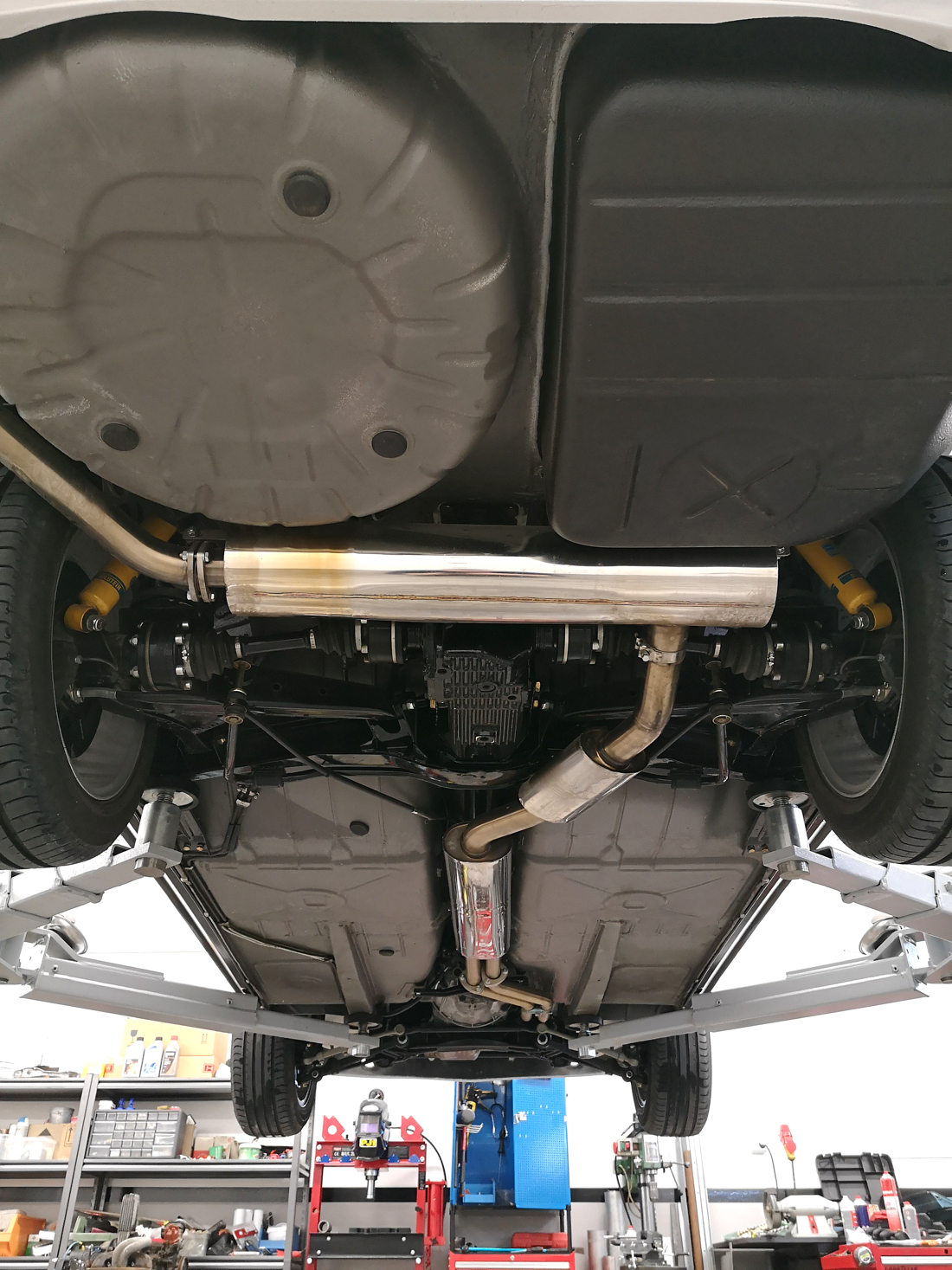 Measuring and trying to figure out a good way to make my own DSSR. 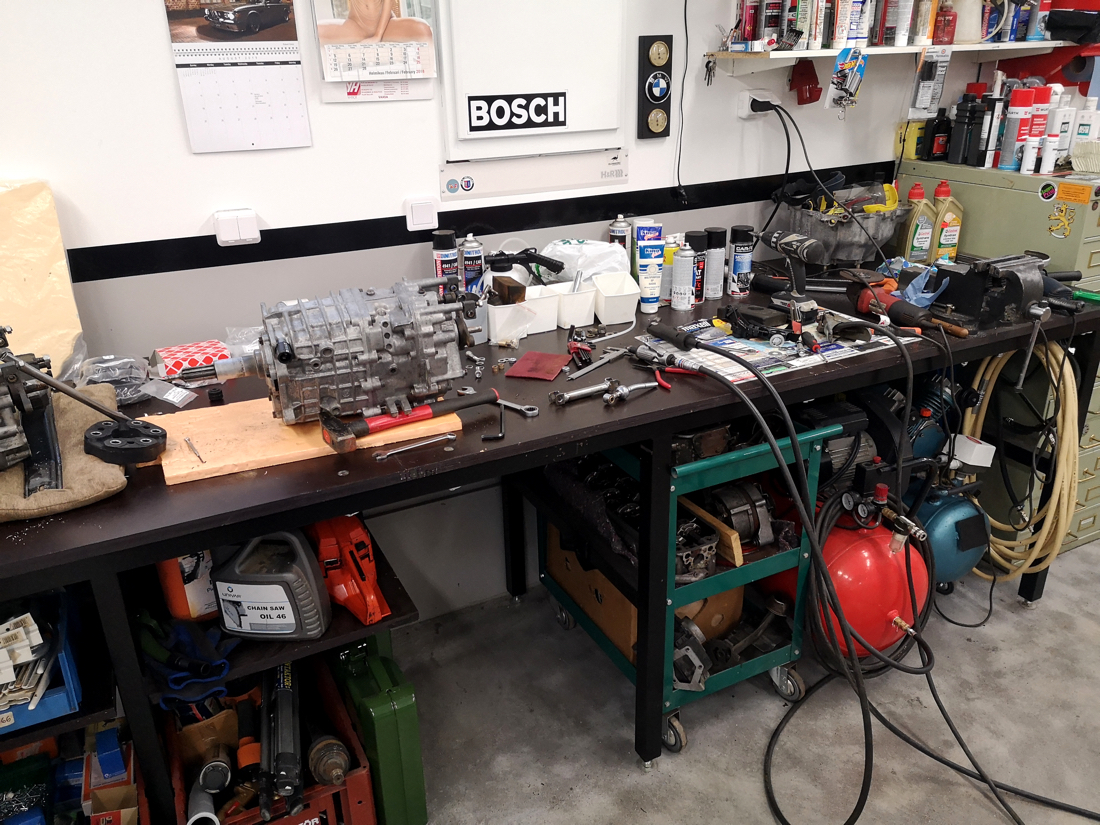 This is what I ended up with, the DSSR won't win any prices but it works very well. I was going to use an e21 320i lower shifter (part # 25111220213) but after looking at it I wanted to have an even shorter throw so I ended up modifying the lower shifter that was in the car (not stock e9) I'm well aware that I might end up with a broken shifter since it now has two welds below the ball, but if that happens I'll just use the e21 320i shifter that sits on the shelf. You can also spot the bronze bushings in the shifter. 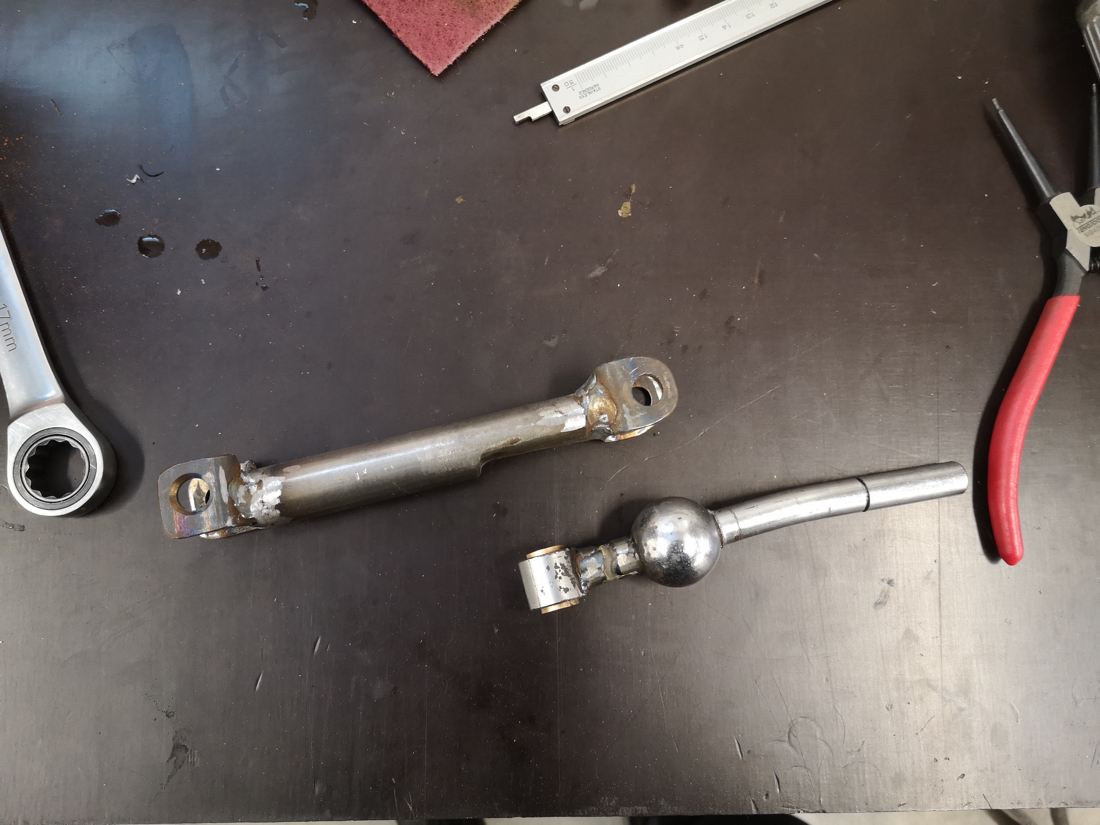 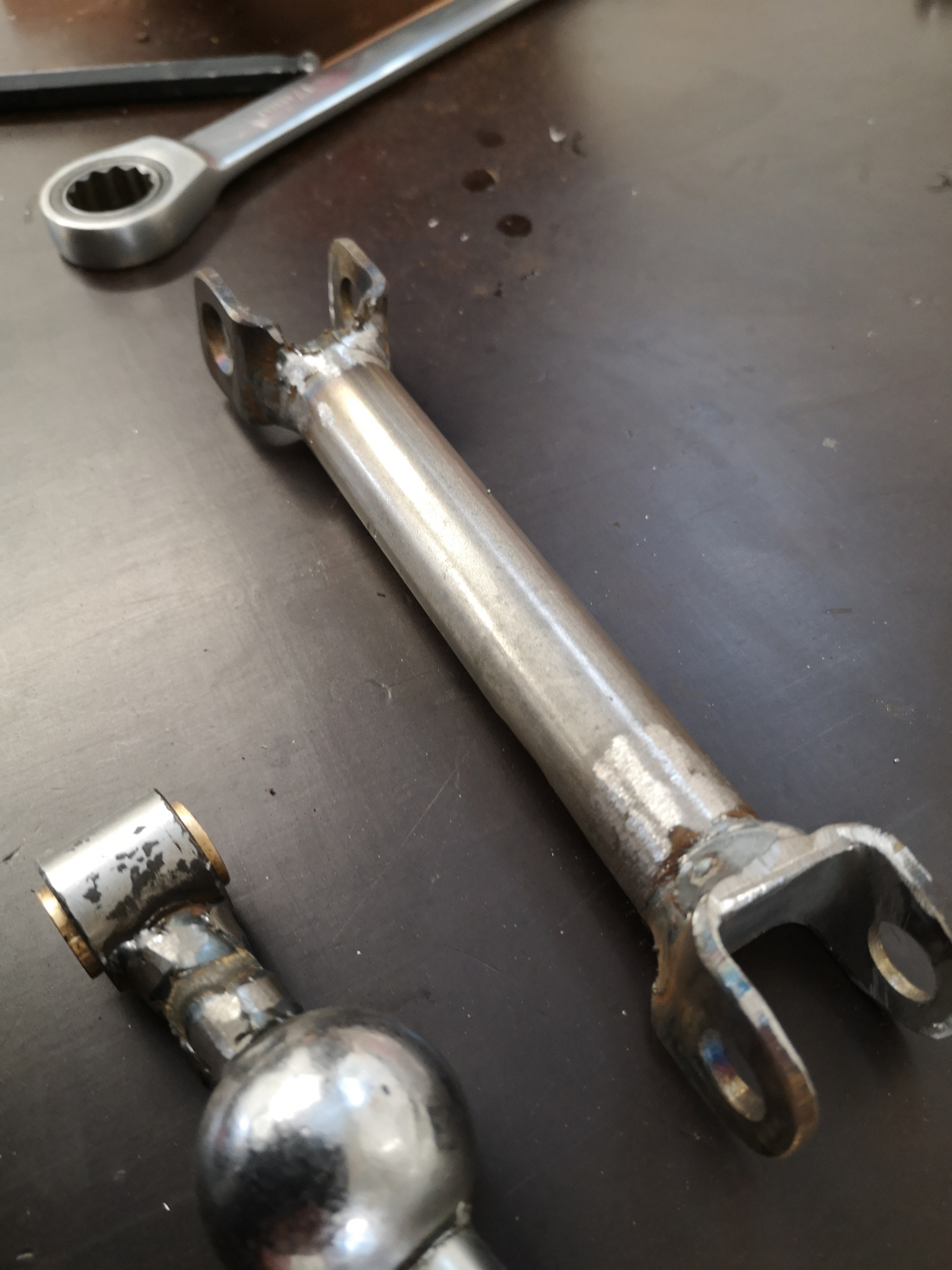 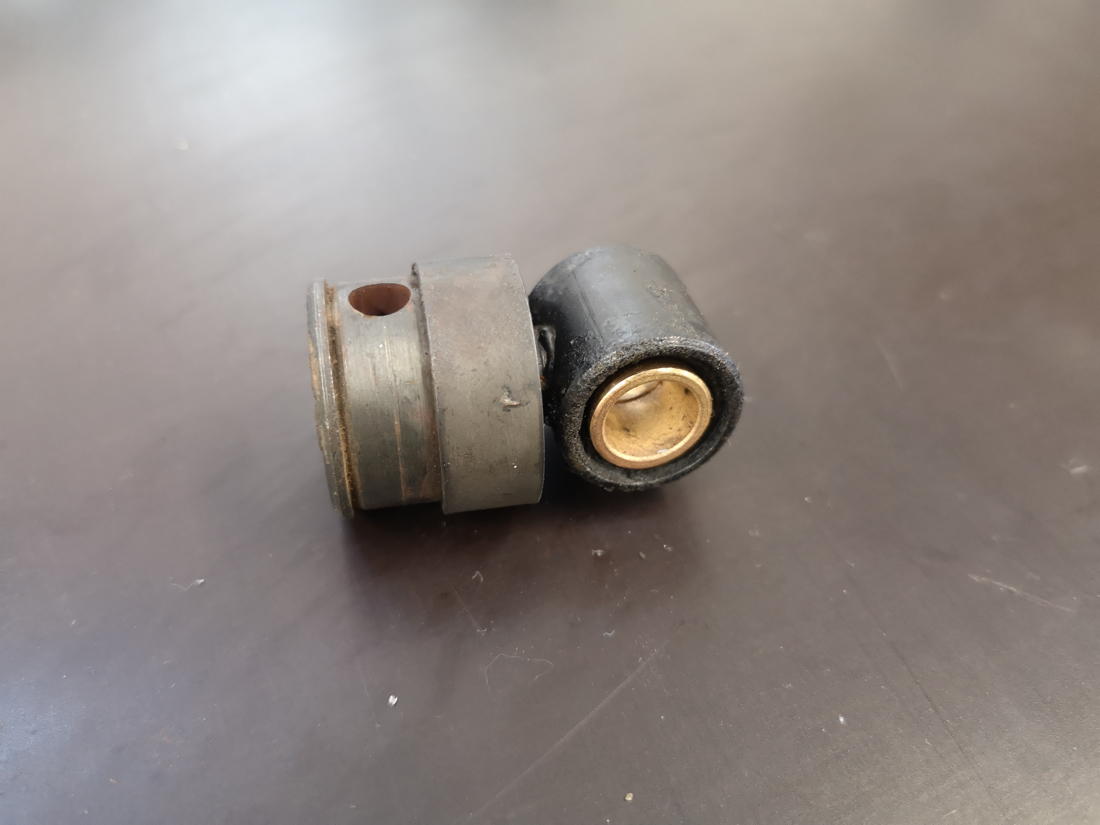 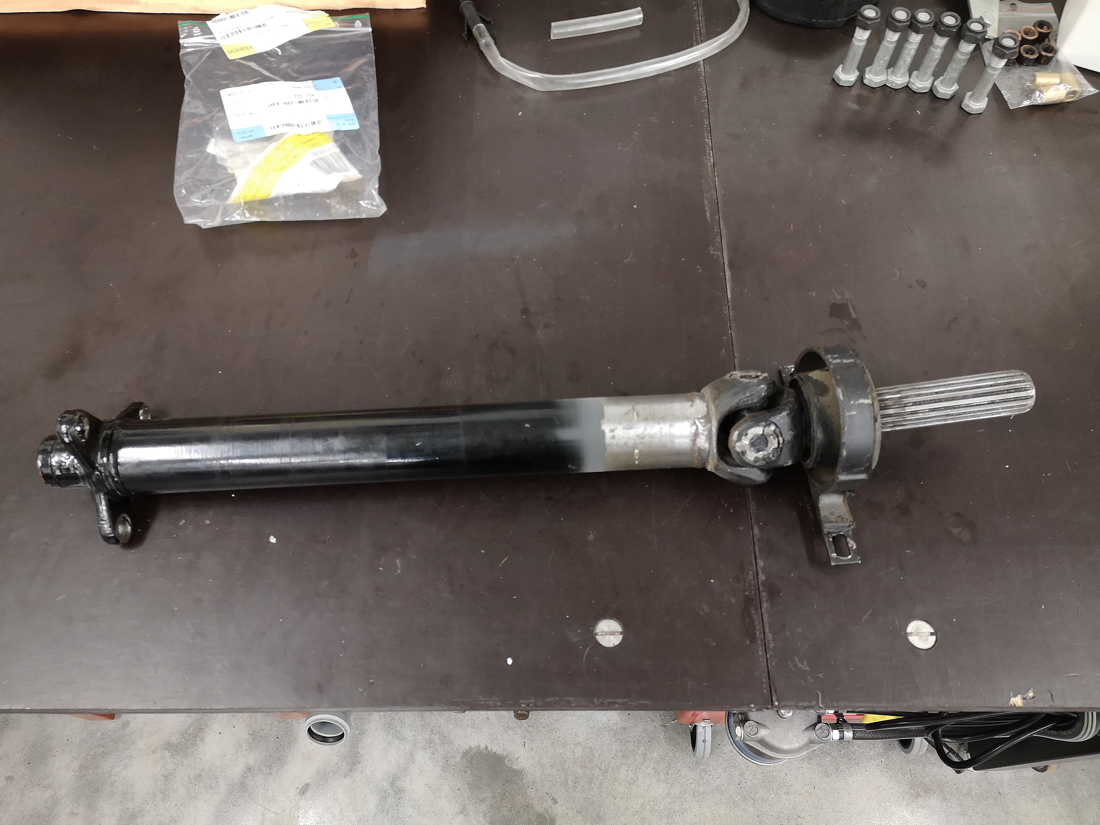 Nose of the front drive shaft opened up, removed the dust cap + circlip + bushing + spring and preparing to cut away 10mm. 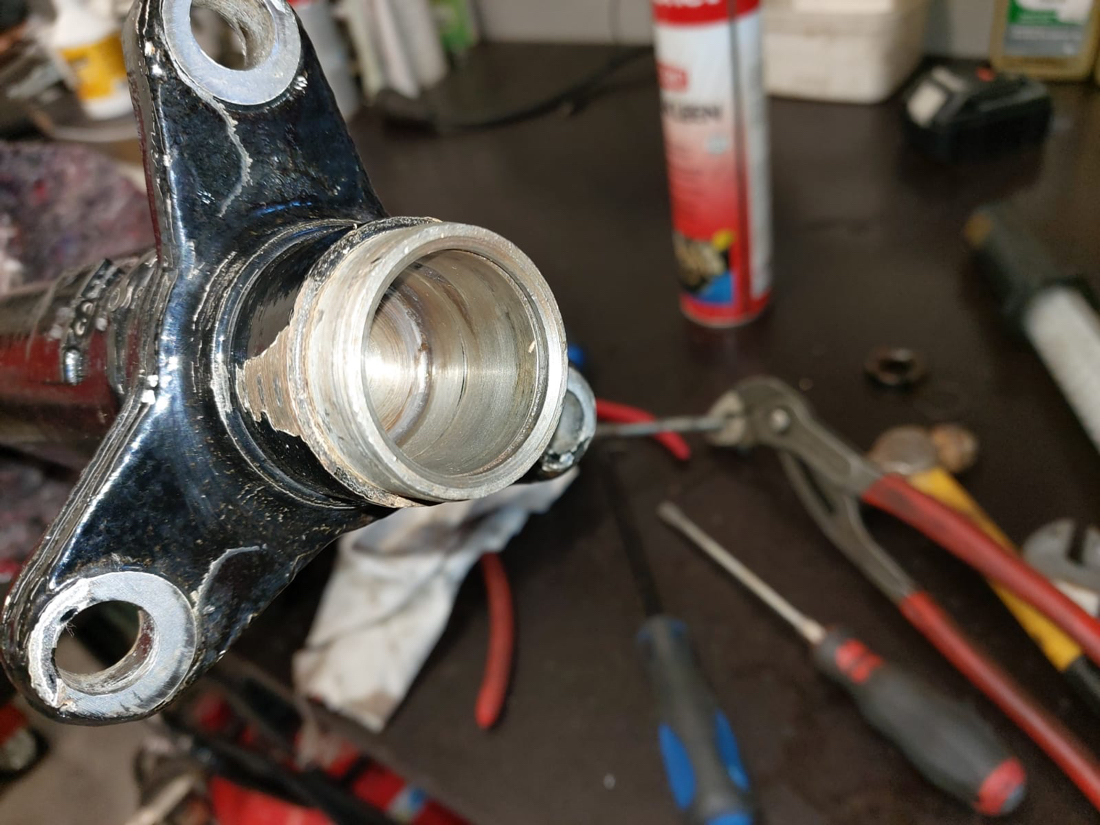 With 10mm of the nose cut away, there's nothing to hold the cut down spring + bushing in place anymore since the slot for the circlip is removed, so this is how I solved it, maybe someone else has a tidier solution? Remember to also cut the output shaft on the gearbox 10mm if you're using the 35mm guibo. 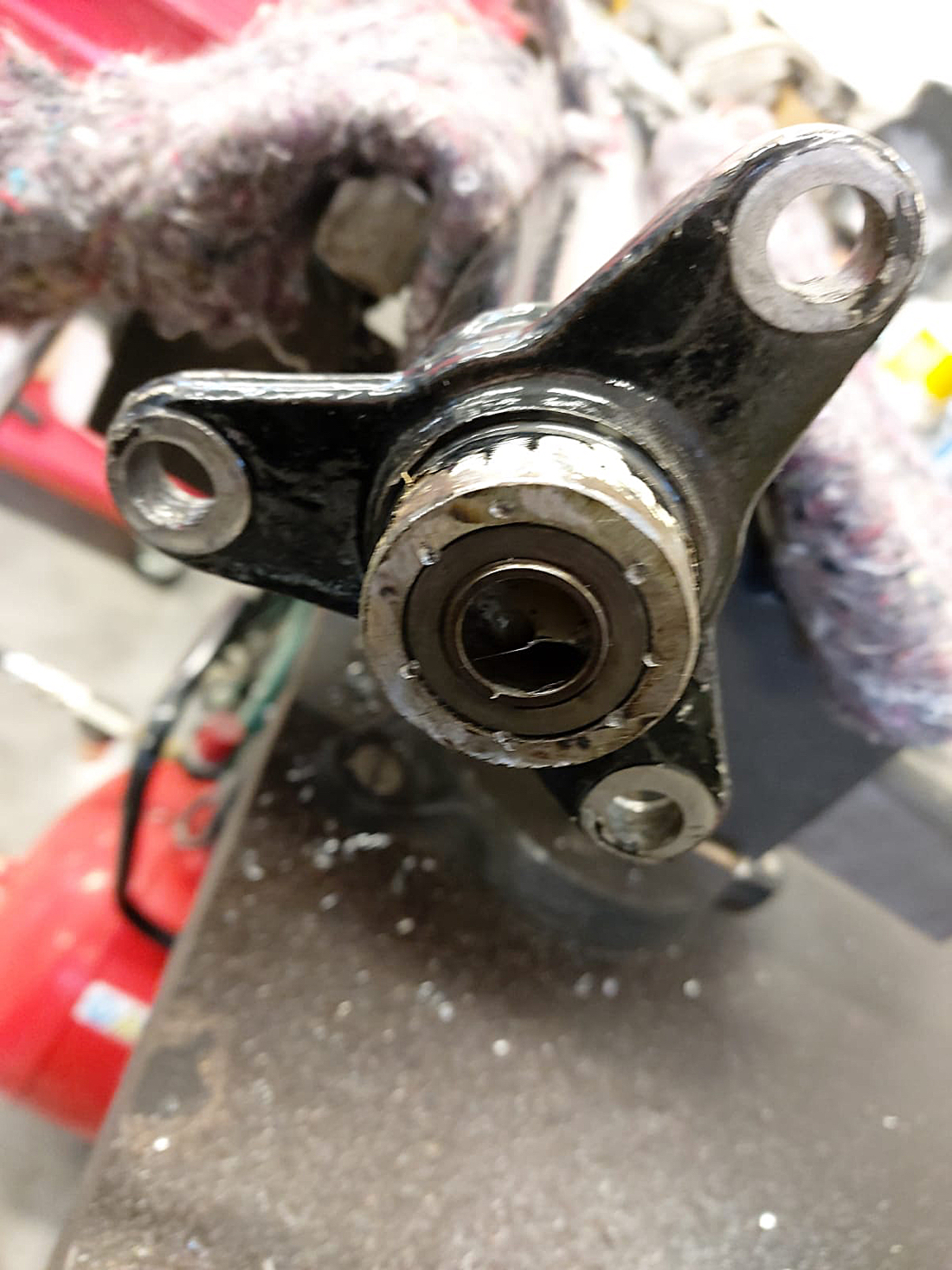 5 speed installed, here you can see the two mounts I made for the crossmember. 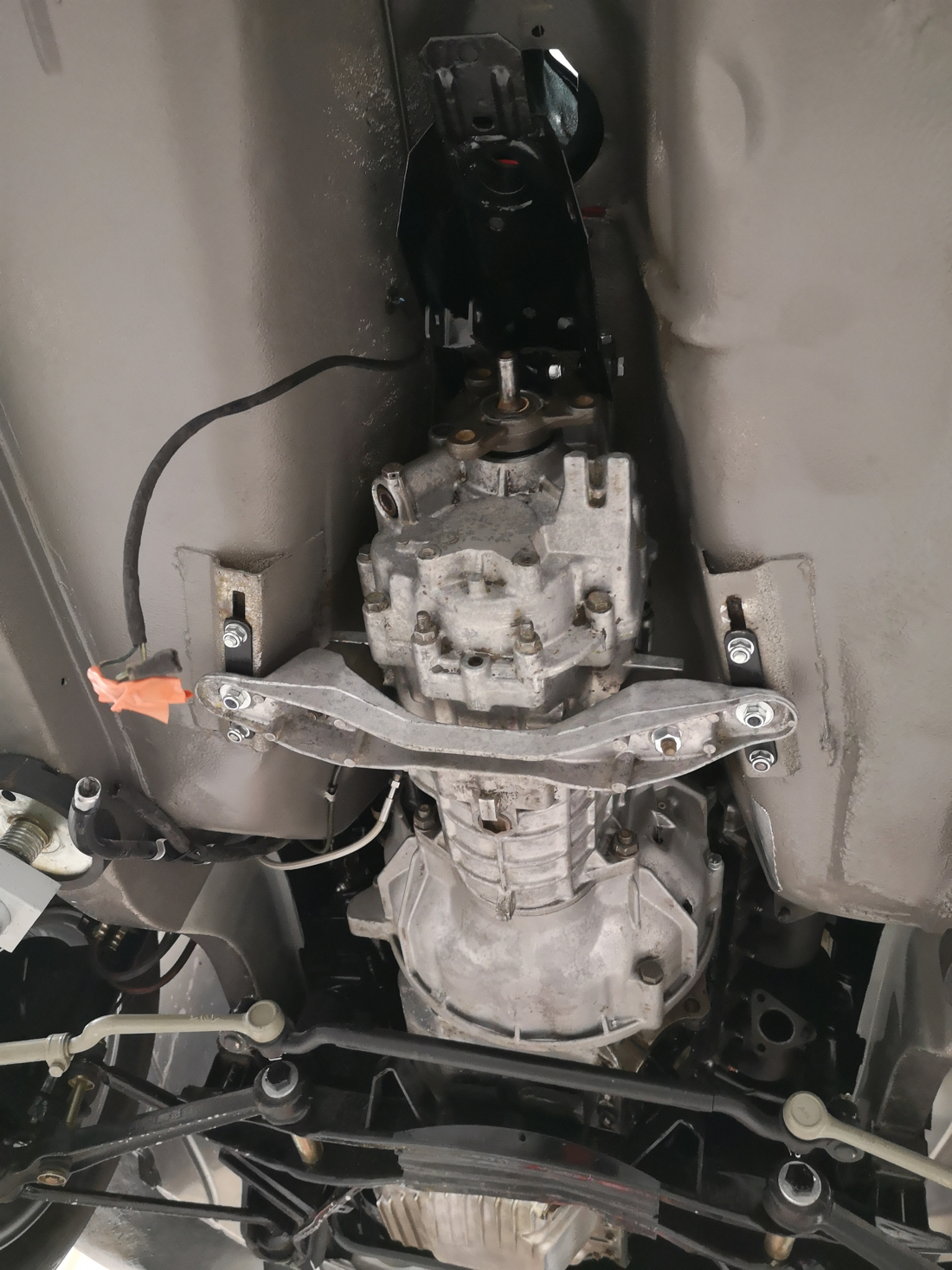 Shifter platform bolted through the existing hole in the tunnel with an M8 bolt (and the swaybar end bushing between platform and tunnel) and I used two nuts to make sure it stays in place. The shifter + DSSR + guibo + driveshaft also installed. 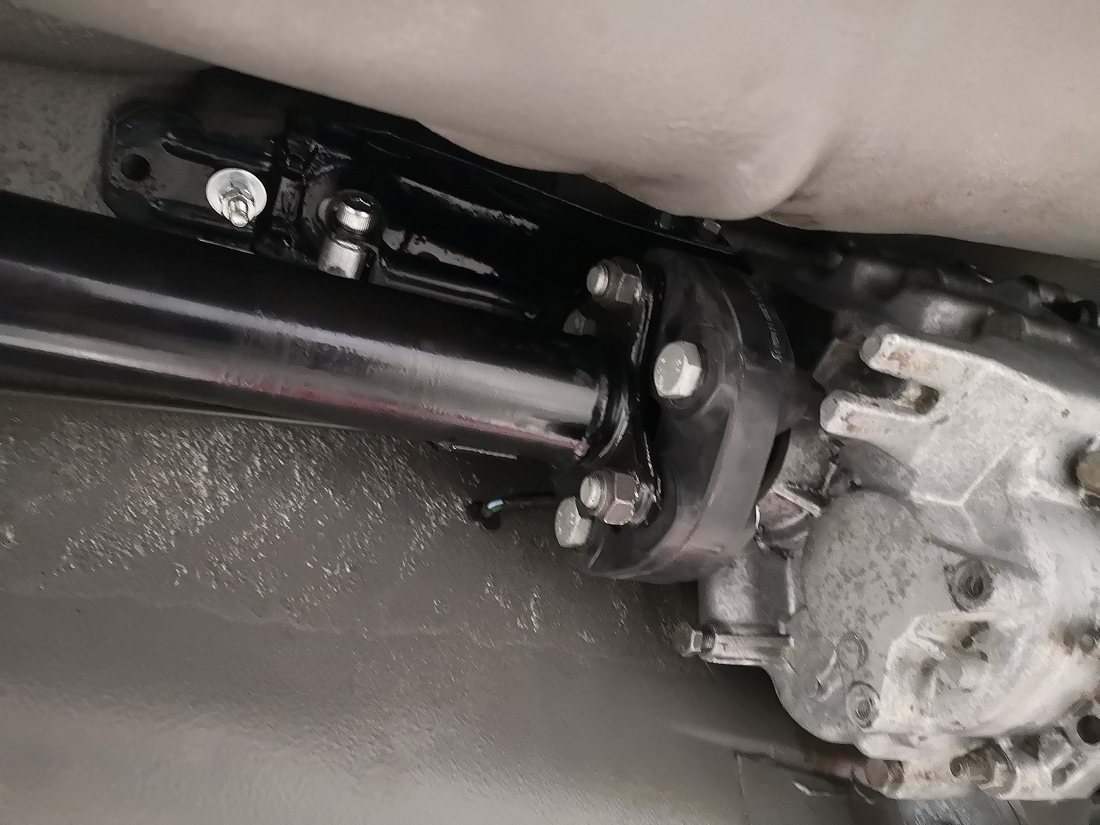 Had to drop the driveshaft center bearing quite a bit to get it to align (you can see the nut + washer I used as spacers), also had to cut out the holes on the center bearing to be able to move it more to the drivers side. Now it's straight. 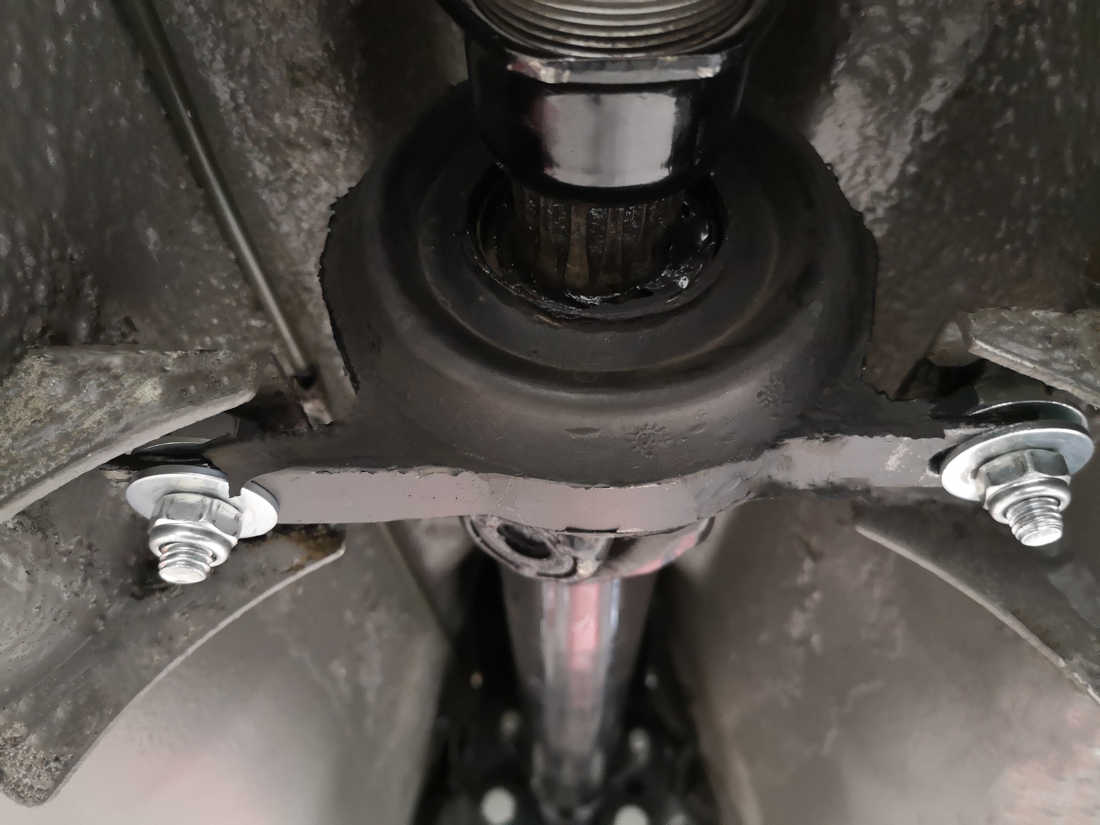 Then I had to figure out a new exhaust hanger, this is what I made but I've seen many different approaches. 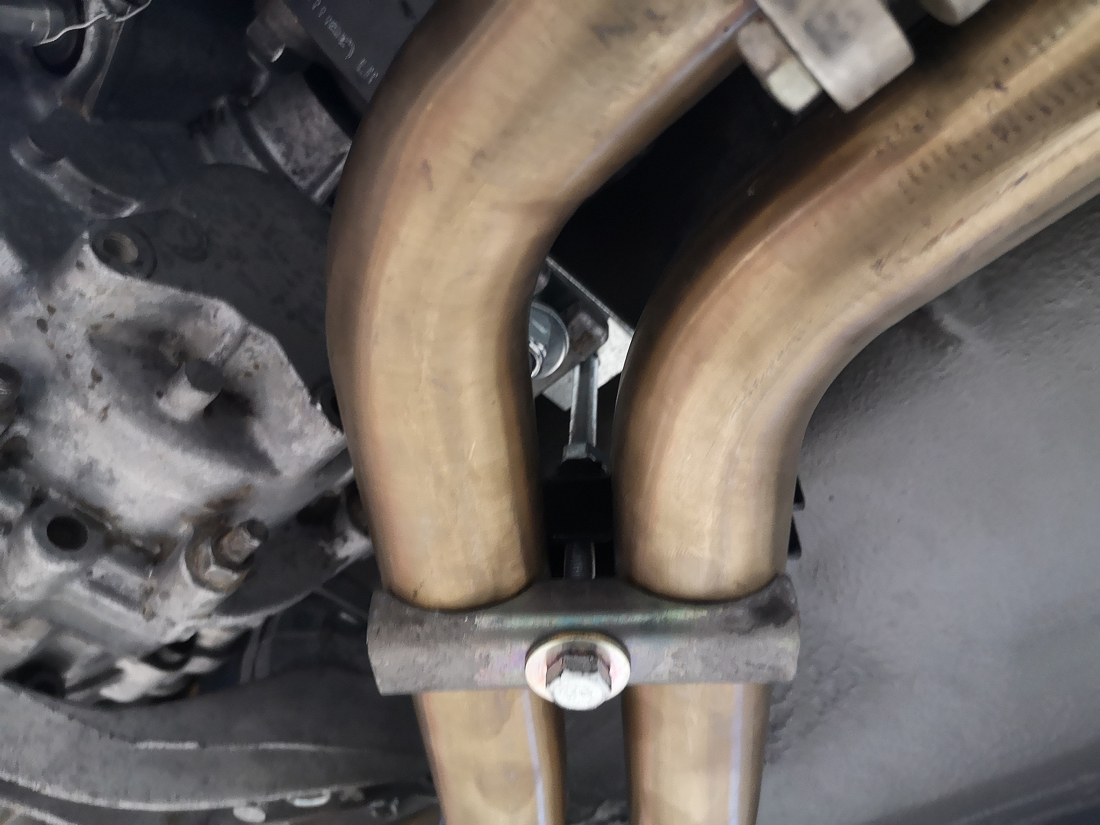 And pretty much done! 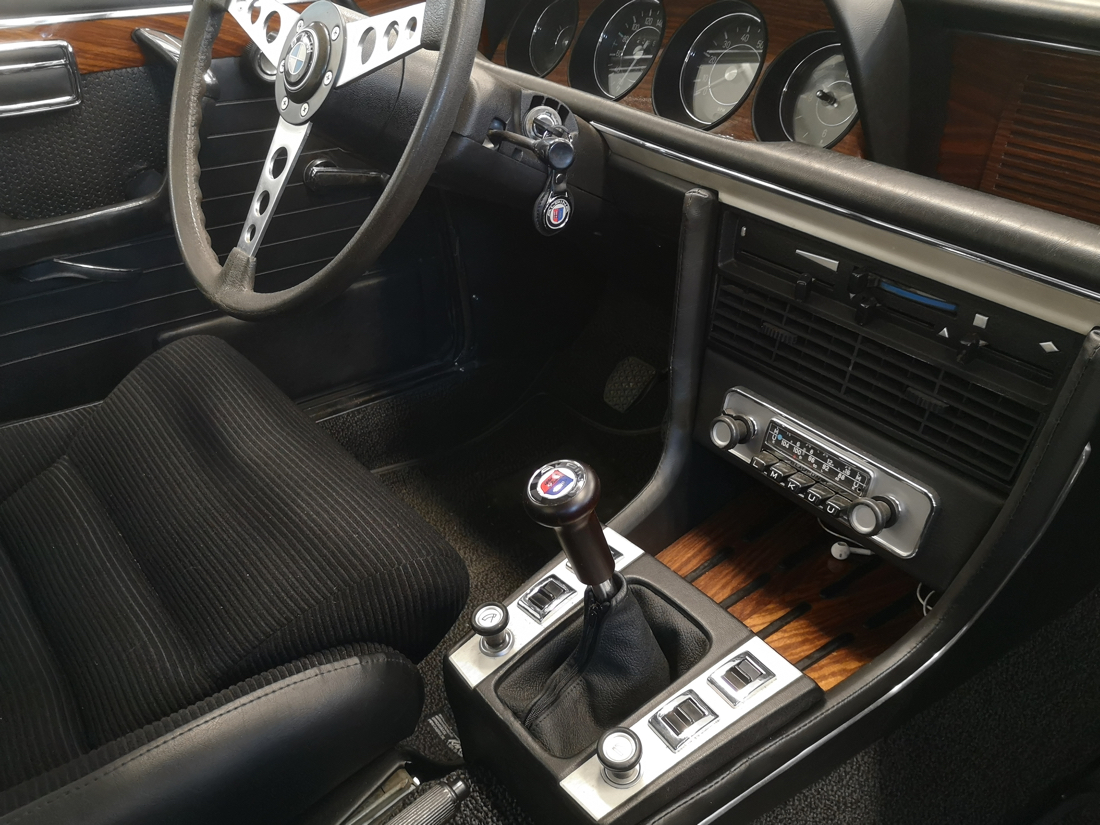 This is how the shifter came out, very little slop now compared to before.

Wow. What awesome work and write up Robert!

Did you shorten that driveshaft yourself? I thought it needed special equipment to re-balance it afterwards.

Great write up that needs to be saved for those that follow!

Thanks Bo and Chris!
The driveshaft was shortened by a machine shop that also does driveshafts and axles etc. Better leave that to the pro's.

Great job on a great upgrade! I did the 5 speed conversion with a short shift kit maybe ten years ago, definitely worth it.

BTW, I love the wood detail in your storage area on your non-AC console! Beautiful!

Fantastic write-up Gransin, and great work throughout! I went through the entire thread last evening. Fascinating.
I think your decision to close up the boxes in front of the A-pillar was a great idea. That should be a "first place to look" for every prospective E9 buyer .

My E9 started the renovation as a relatively clean, dry Italy car, so it was not necessary to separate the front fenders. It was already in the process of restoration and the bodywork and paint had already been completed. Even so, when I did my first inspection before the interior was installed I casually reached up inside the box through the wheel well and... The seller couldn't believe I showed up with a digital endoscope! I looked inside the fenders, A-pillar, rockers, etc., just to assure myself about the integrity of the chassis. Fortunately, the original owner had the car cavities waxed upon purchase, so it was quite clean inside.

Needless to say, working a vacuum with rigged up flexible hose into those cavities was added to the punch list!

Willem Tell said:
Fantastic write-up Gransin, and great work throughout! I went through the entire thread last evening. Fascinating.
I think your decision to close up the boxes in front of the A-pillar was a great idea. That should be a "first place to look" for every prospective E9 buyer .
Click to expand...

Thanks Willem!
Well the closing of the boxes was already done when I started the project, so I just thought it was a good idea and kept them closed. The previous work was only half done since they hadn't put any wax or similar in the boxes after closing them up, so they had unavoidably started to rot away from within. They are all properly waxed/oiled now and I've scheduled another appointment for the coupe to go and get another shot of rust preventive treatment in a friends anti-rust shop. He tried to convince me that the first treatment he did was already done over the top, but belt and braces you know..

I was able to go out for a 70km test drive a week ago, and while the gearbox shifts nicely and has no idle rattle, it has really bad gear whine in 1st, 3rd, 5th gear.
I had Redline MTL put in it, and after the short-ish test drive I got back home and decided to remove the oil to check what it looked like, and it was dark and contaminated.

The magnetic oil plug that was clean before the test drive had quite a lot of metal on it: 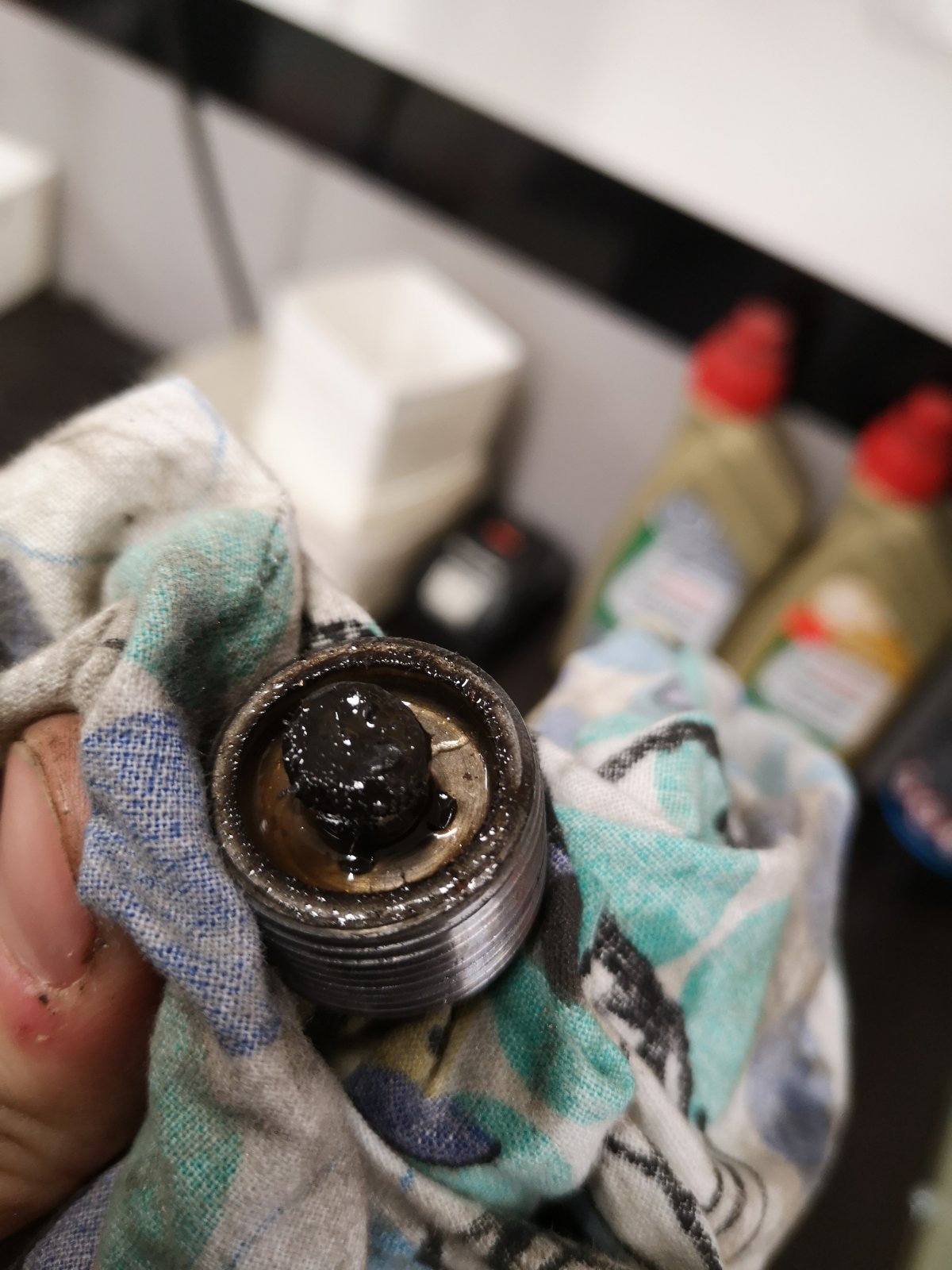 So now I realized that I needed to start a new search for another 265/6 or have this one rebuilt (if even possible). I knew this could happen with an old gearbox but it still sucks.
I contacted the seller in Liuthania just to see what he thought of it. This guy must be one of the greatest persons on the planet, he immediately takes full responsibility and arranges for a truck to come by my garage and pick up the bad gearbox and ship it back to him, and as of now he's preparing another 265/6 for me, which should be on the way to me in a week or so.
While it's some extra work, I'm still super happy with how it all turned out, I'm crossing my fingers that the other gearbox will be in OK condition.

Bonus images, gearbox back out: Back home from test drive Ouch! Dropping the tranny is one of those heinous job...
But real good to hear about the seller’s integrity. that is not often the case.

Bmachine said:
Ouch! Dropping the tranny is one of those heinous job...
But real good to hear about the seller’s integrity. that is not often the case.
Click to expand...