Hello all. I wanted to introduce myself. My name is James Laray from Northern Virginia (USA) and I am restoring a 66 2000 c. This is going to be a "ground up/frame off" resto on a rotisserie. I was a member of the forum from 1997 - 2002 at which time I owned a 2800cs (which I regrettably had to sell due to a divorce). I regretfully abandoned the e9 ship but did buy a pretty rough 76 2002 which I restored nicely. It went to a collector in California last December.

I always wanted an e120 from the day I first saw a 2000cs which I actually sat in thus admiring the car up close (back in 1981). My chance came in 2014 when a friend rescued the one I purchased. The car was destined for certain oblivion. It is rather rough. A victim of abandonment and vandalism. Nonetheless I see "good bones" (not too much rust).

I have started a blog to celebrate my endeavors:

Side note: I have quite a variety of e9 parts purchased as part of a collection. Some apply to the e120 other parts do not. I am eager to sell what I can to help offset the cost of the e120 restoration. I am still trying to decipher how much to charge within reason for said parts. I know 2002 parts, but some used e9 part values seem to be quite a mystery.

Thanks for your reception, 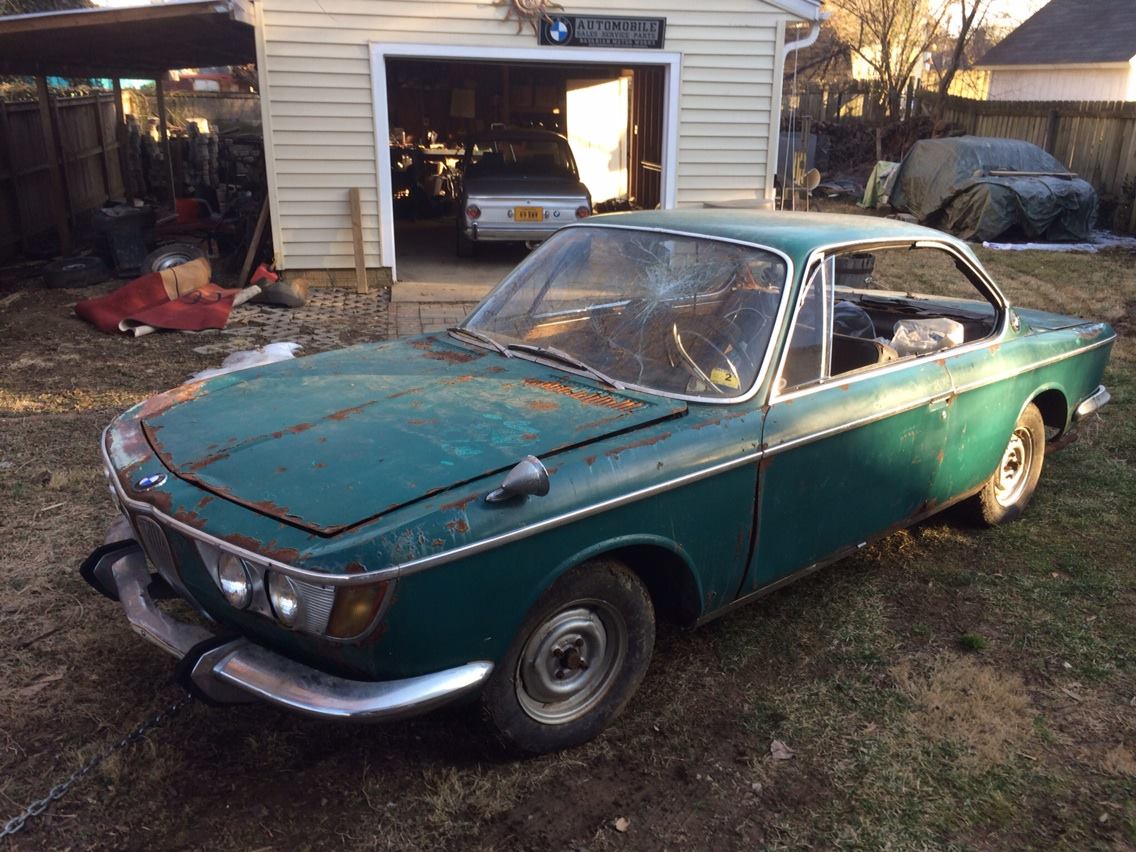 Welcome, I loved reading your blog, you have a serious project on your hands. Two issues will be the front subframe and rear diff. The early subframes have unique and NLA idler mounts/bushings but can be swapped with the 68 and later subframes. The long neck diff is very robust but it has a u-joint and sliding pin arrangement instead of traditional CV joints. These can be swapped using 2002 and e21 parts I believe, there is info on the 2002faq site. Also an issue is front strut bearings but there are alternatives there too. Good luck and keep us up to date!

Thanks! I knew the front sub frame was different. A friend suggested switching it out with a 2002 version. I am encouraged about your differential comment. I have a spare in pretty good shape (spider gears look good). I am glad I can swap out for the 2002 CV half shafts. I also want to swap out the brakes in the rear. Part of me is contemplating disc brakes back there. I am curious about switching to a drive shaft with the guibo up front versus in the rear - I've never seen that. This car is a 6 volt system too I believe.

Thanks for checking out my blog. That inspires me to keep updating and also so I can get good feedback.

I notice you have a 69 NK2000. Have you owned or worked on the earlier NKs? You know your stuff!

The half shafts need parts from 2002 and e21 I believe. I would keep rear subframe intact with drum brakes, they are fine. My 69 has the later side loader diff and front subframe so it is a bit easier to work on. There is a faq under construction on the early half shafts you can check out on the 2002faq from when I had an early 2002. Get your driveshaft rebuilt and keep it original, much easier I would think although you have considerable fabrications skills it appears!

And check out the NK section on the FAQ, lots of relevant info for our early cars there.

Whoa Nellie, James... you are jumping in with both feet. Looks like it will be a handful, for sure; but it sounds like you are on the right path and have lots of help.

I'm just glad to see another early car. I've been too busy driving and enjoying mine to tear it down for interior and paint... soon...soon.

zinz said:
Whoa Nellie, James... you are jumping in with both feet. Looks like it will be a handful, for sure; but it sounds like you are on the right path and have lots of help.

I'm just glad to see another early car. I've been too busy driving and enjoying mine to tear it down for interior and paint... soon...soon.

Thanks Ed! I followed your purchase and mechanical repairs - excellent. I actually remember when your's was for sale. Lovely car. Red is so nice. Inspired by your shares!

I've read through your Blog... seems very intimidating, but I can see you are not scared. I know of a NOS front fender in Finland if you need one. They have other parts as well. PM me if you want the details.

Have a great weekend,