bluecoupe30! said:
Impressive and inspiring, as usual, Erik. How do you fend off the local car restoration enthusiasts that need a particular NLA part fabricated?
Click to expand...

I lend them the specific tools that I made... but they have to come over for coffee / beer and talk e9's for a whole evening in the garage, with the fireplace nicely keeping the winter cold out!

Fantastic work as always Erik, always a pleasure seeing the work you're doing done at such a high standard

wow, great stuff, I wish I visited you while I was in Amsterdam!

Stan said:
wow, great stuff, I wish I visited you while I was in Amsterdam!
Click to expand...

I need to finish it for Prom Night of one of my daughters. The oldest is 10 now. So I have to hurry up.
.

eriknetherlands said:
I need to finish it for Prom Night of one of my daughters. The oldest is 10 now. So I have to hurry up.
.
Click to expand...

Good grief. So only seven years left. At the rate at which you’re going, that is cutting it close!

Bmachine said:
Good grief. So only seven years left. At the rate at which you’re going, that is cutting it close!

After getting the W&N part cleaned, zinced and into rough shape, I saw that the curve from top to bottom doesn't 'flow' nicely. The 2 edges are flush, but over a length of about 10 cm /3 inch, there is a air gap that shouldn't be there. The gap is about 2mm at the widest point, enough to fit a thin paint stirring stick in there.

To know where I should strive for, I made a template out of 2 mm thick steel plate, using my NOS quarter panel as the reference.

Started out with a rough shape using a long shape-copying-thing ( the blue thing)
Copied that onto steel, and roughed it out.
Then I took a Sharpy and drew a thick black edge. This makes that you can see a scratch line better on the grey plate while grinding later.

Checking the resulting template to the NOS panels shows only 0,5 mm airgap at the most, enough for me.

Most tricky part (for me) is getting the curve on the quarter panel from top to bottom just right after welding. Part of all this work that you see below is that I'm fearful that my hobby skills are going to shout "hack-job" from 20 feet away after paint.

I installed them in the car with these super strong 5 cm / 1.8 inch magnets . They are really fantastic, and keep the templates at a nice 90 angle to the car, while allowing them to reposition them with a light tap.

I also use them to hold panels while welding, but be careful: if they get hot, they loose their magnetism.

The second template showed also that right where I'm planning to but weld them, the edges tuck in about 3 mm (1/8 inch).

to counter this, I am considering to brace them from behind during welding. I'm just going to hope that it'll stay that shape during and after welding.
I tried to brace it into place by pushing the but weld edges from behind; looing at it, It does close the air gap nicely.
Sofar it is all dry fitting still.

Let's hope that by welding slowly and lots of cooling, that I can keep that shape.

I am in constant awe of your metal fab skills and attention to details.

Bmachine said:
I am in constant awe of your metal fab skills and attention to details.
Click to expand...

well, let's see if it works out like I hope!

So it might take another 2-3 weeks before I'll post some results.
Edit: had a boring evening, so i made the easy bits already.

One thing left to do and that is to cut a oblong hole of 18x40mm through the square copper section to allow the other 12mm electrode to poke through it.
My friend with the lathe is on holiday, so I have think about waiting to do properly on his lathe, or go DIY and drill and file my way through.

Ok. I Couldn't wait. Just finished the last bits. Instead of milling on a friend's lathe I used my own equipment. I do have a serious bench drill (80kg/ 160 pounds) with a cheap, crappy X-Y table, mimicking a lathe setup. It took a while as I need to take it slow, even though the drill is big, it's bearings aren't designed for sideways loading. And the X-Y table + the drill bed together have quite some lateral in it, leading to a lot of vibrations/ chatter during milling. Luckily copper isn't to hard, and chops easily.

It's all assembled now, and it welds fantastic!

First I used a scrap piece to do do a few trial welds, playing with settings.
Then checked if it fits the wheel well, with the off cut section from the Walloth part, and welded that. Being zinced it does spatter a bit.
When I try to separate the welds they pull out nicely, giving a perfect hole in one sheet as a good spot weld is supposed to do.

I did notice that after making about 20 welds, the last welds weren't strong anymore.

While welding, the metal did turn red, but I could separate the welds easily. Just pulling lightly with pliers they only held about 5 KG (10 pounds) each.
So something in my setup is wrong. 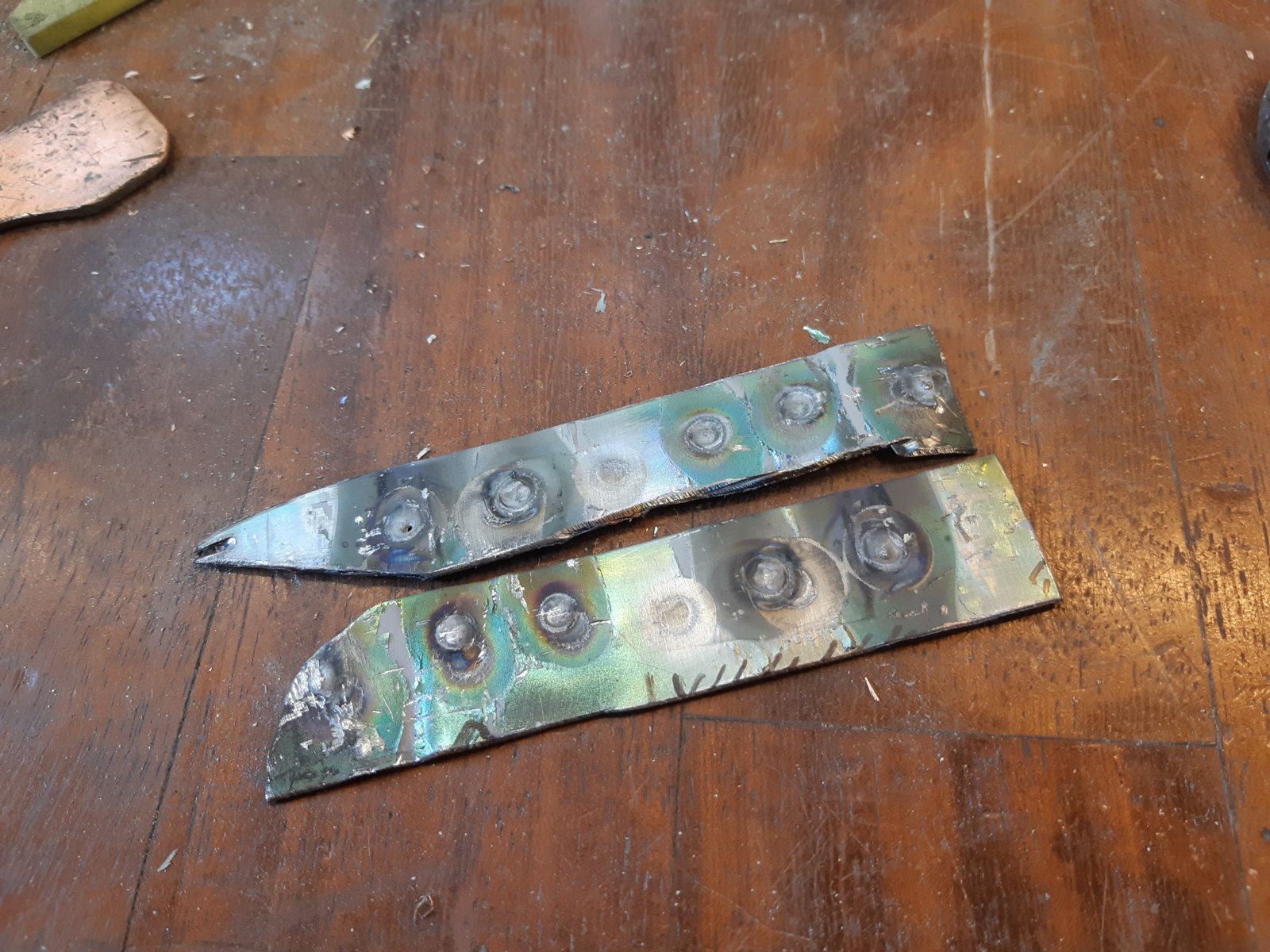 It took a while to figure it out (well, it remains a hypothesis until I prove it with better welds that is):
- removing the zinc didn't help,
- sharpening the bottom electrode didn't help
- However while trying to clean with fine sandpaper the flat electrode part, I noticed that the touching point was all grey and hard: See picture. I scratched it with a sharp object, and it seems to be harder then the base material. 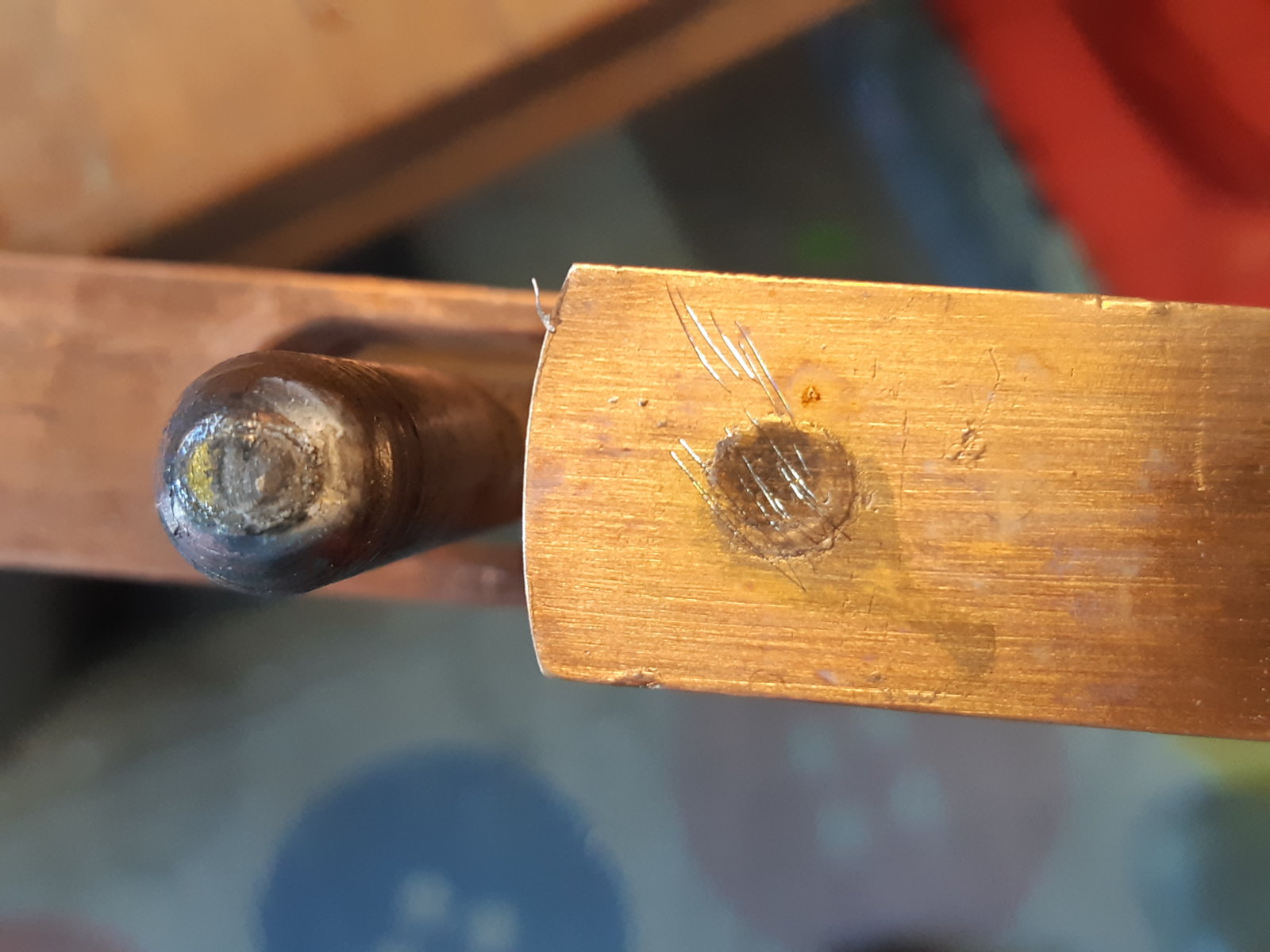 Either iron has embedded from the trial plates, or something else happened.
These 2 flat plates are not copper, but a copper-zinc (brass) alloy that I had scavenged from an old machine; its slightly yellower than copper. I thought it would work, as I also use it as a back stop while welding; welded iron doesn't stick to it. But now it does seem to do; perhaps because there is a lot more current passing through that barrier layer?
Anyway I think the brass is the origin of the bad welds.

To test my theory, I just stuck a copper plate between the flat electrode, and 2 metal scraps did weld together again, not super strong, but perhaps 4 time stronger then the previous weld. 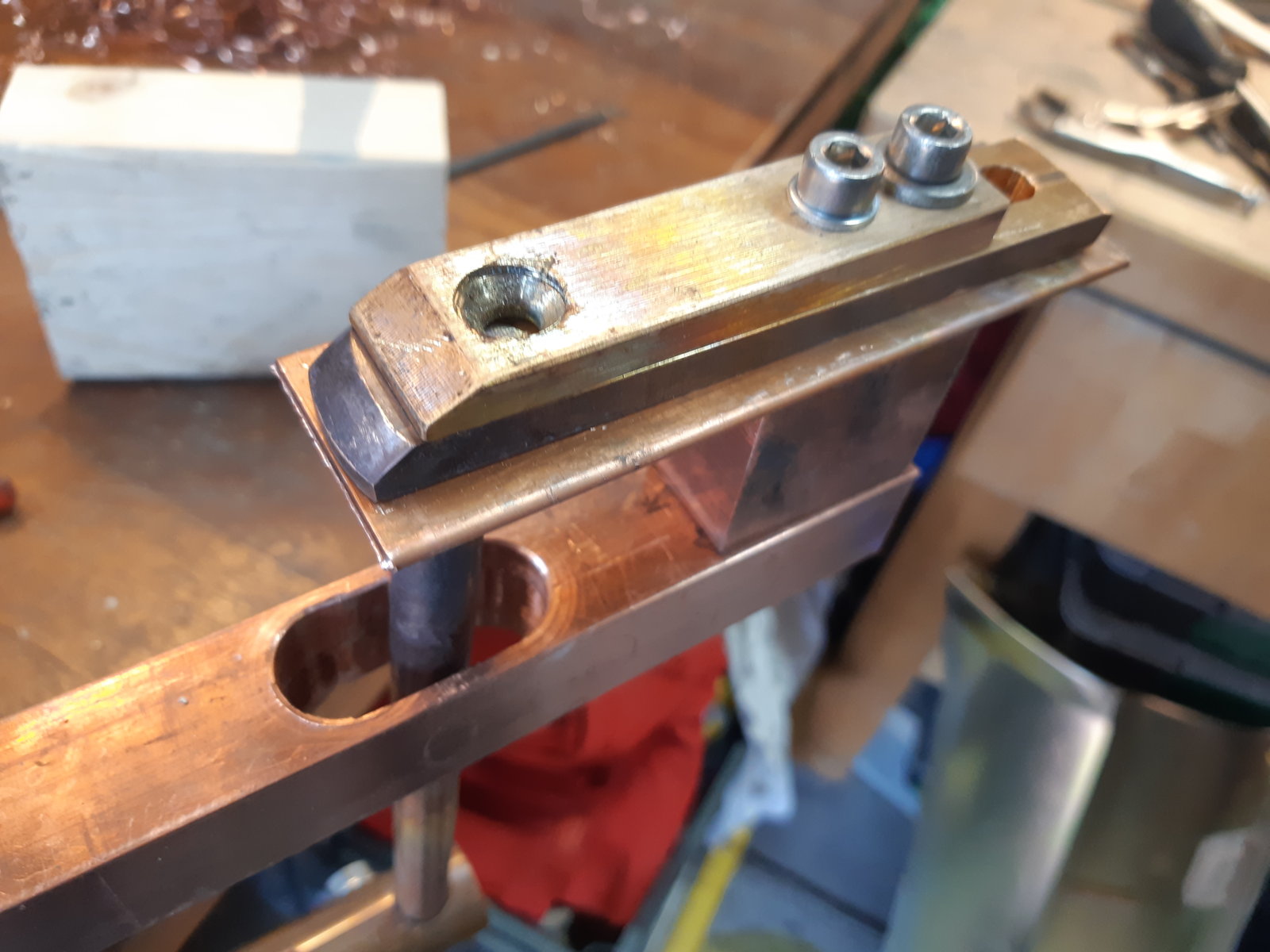 I think the welds aren't super strong because the electricity did not really flow nicely as I just used a copper water pipe that I flattened in a big vice: this gives a not really flat part, thus reducing the contact surface to the electrode arm, thus resulting in bad conductivity. As a result, I think I just created too much heat in the electrode arm parts, which is basically consuming energy that is needed for a good weld.

So likely the flat electrode is in need of a modification; it needs a copper part instead of the brass part. I ordered some more copper flat stock
Nearly there....