What did you do to your E9 today?

Stan be sure to line up the center caps with the valve stems.

before the next alleged snowstorm (tonight) 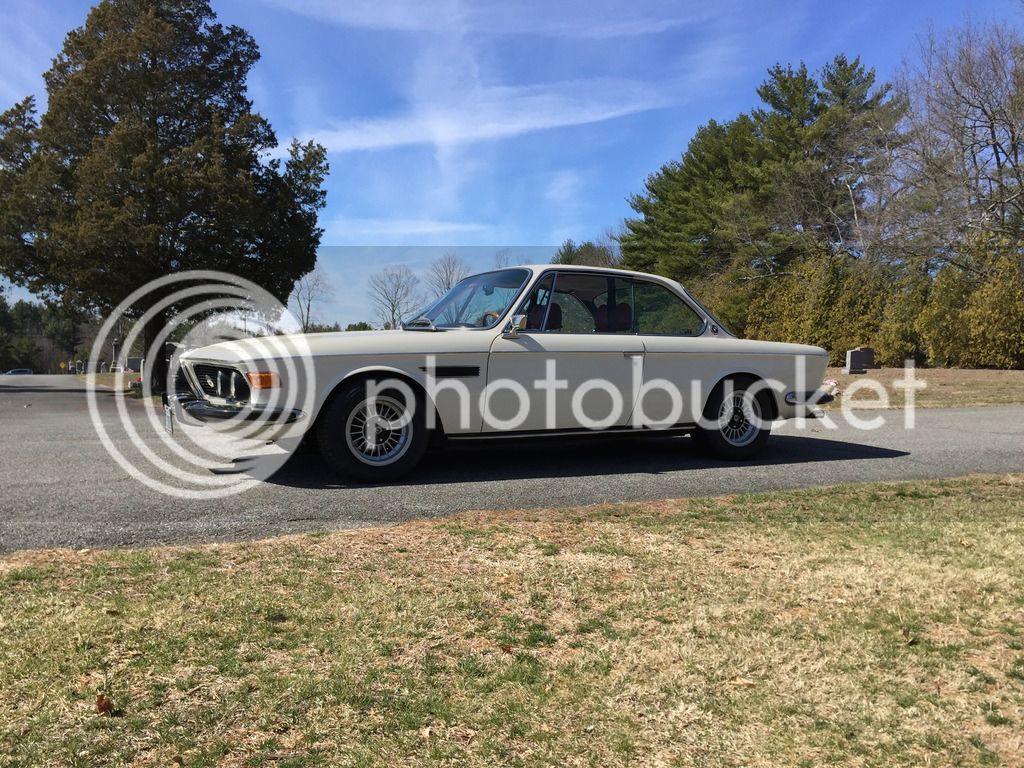 I got the damn thing running finally! Carb issue stumped a ton of my friends and I. Over fueling the main circuit, but nothing was amiss.

Damn anti diesel solenoid was dead, and god knows how that caused the main circuit to pour fuel down the Venturi. Didn't mean to get it wet, but life happens. I dried her off back at home. Man it was great to drive her after 4 months of her sitting in the garage broken.

I had the helping hands of my Uncle. I towed it to his house, and he said he'd have it running by the end of the day, no questions asked. What would happen if it wasn't running? Id drive his Ford GT40 home. I swear he killed himself so I wouldnt drive his GT40 in the rain. 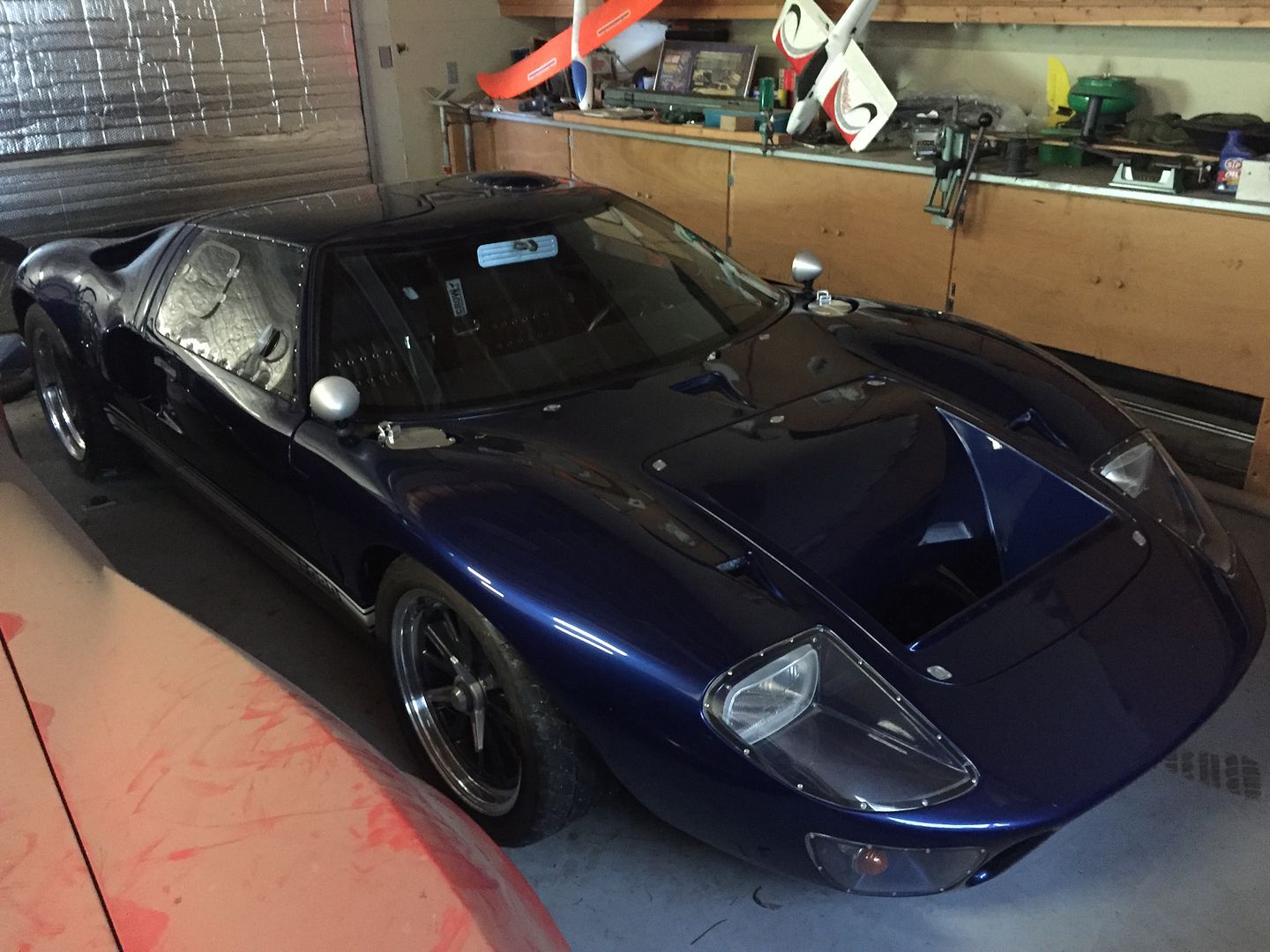 It's funny Don. When we were talking on the phone I said its probably an easy fix. It was about 50 hours of diagnosis between numerous people. A normal human would have cut their losses and thrown a cheap knock off carb on it for $500. At least I know it's working now.

Well this should have been a nice day but I managed to ruin it.

After 5 months in hibernation I decided to start up the Csi and after the second turn of the key she purred like a kitten.

Happy as a kid I decided to take her out for a spin but in my to narrow underground garage managed to hit the elevator door with the right rear wheel arch with a nasty scratch as the end result.:-(

So my first trip of the season was to the body shop where her repair is scheduled for next Tuesday.

Hope this isn't a bad omen for the rest of the season.:roll:

No! That's rough, and I'm sorry to hear it. Thankfully the small stuff can be repaired.

MyFemurHurts said:
No! That's rough, and I'm sorry to hear it. Thankfully the small stuff can be repaired.
Click to expand...


Thanks for the support Brendan. It indeed won't be a problem to repair the damage but it's just so stupid.

You pamper the car for 5 months make sure not a drop of rain hits her and than after a drive of 10 meters this happens. Oh well will be the last time I try to leave that stupid garage without somebody else watching to make sure she fits on to the elevator.

Philippe, I can't remember... is the csi the one that was originally inka?

If the damage is significant, would this be an opportunity to bring it back to original color?

Started her up and picked up the e9 ambassador Stan for a quick tour of uptown New Orleans and dinner/beers at the Rivershack dive bar/restaurant. He got behind the wheel and let her rip up River Road for a quick test drive. Enjoyed some coupe speak and sharing of stories and appreciate him taking a break from his schedule here to say hello. He can now check me off his list!
Last edited: Mar 22, 2016

Stevehose said:
Started her up and picked up the e9 ambassador Stan for a quick tour of uptown New Orleans and dinner/beers at the Rivershack dive bar/restaurant. He got behind the wheel and let her rip up River Road for a quick test drive. Enjoyed some coupe speak and sharing of stories and appreciate him taking a break from his schedule here to say hello. He can now check me off his list!
Click to expand...

Heard Stan was going to be in your area, glad you two were able to get together. he truly is the E9 ambassador, his enthusiasm is infectious.

I ordered some bits for my upcoming 5-speed upgrade. Carl at La Jolla BMW managed to find a used speedo drive setup and the new shifter parts needed for my rebuilt Getrag 265/6. Not cheap, but getting increasingly scarce so I bit the bullet.

Just curious between sourcing a rebuilt 5-speed, extra parts (what shifter parts are hard to find and expensive?), and labor..... ballpark if Carl is doing labor, what is the price these days? It's way down the list but if my 4-speed eventually goes out, I may consider swap, I least I won't need the pedal box. My throw out bearing is making some noise and may need to open up trans. sooner than I want to. But if everything looks ok still, I think I will just keep 4-speed. It cruises at 75-80mph no problem without it feeling like it is winding out too high on RPM's. I'm lucky in SoCal to be able to get over 80mph for sustained periods of time anyways. But I might as well start looking for hard to find parts just in case I need them down the road. I like the 4-speed on the back roads, hills, and low gear (1st gear ratio).

Replaced the exhaust hangars- what a pain!

Then I drove her and what a blast!


GolfBavaria said:
Just curious between sourcing a rebuilt 5-speed, extra parts (what shifter parts are hard to find and expensive?), and labor..... ballpark if Carl is doing labor, what is the price these days? It's way down the list but if my 4-speed eventually goes out, I may consider swap, I least I won't need the pedal box. My throw out bearing is making some noise and may need to open up trans. sooner than I want to. .
Click to expand...

I found the 5 speed on ebay. It was rebuilt some time ago and the owner never did use it. It was $1200 plus shipping. BMW still has rebuilt ZF 4 speed units for $3k through BMW of Monterey or BMW Boston. Other dealers might want MSRP.

I have read a number of threads and there basically aren't enough parts available to do a proper rebuild on a 265 Getrag. There could be some here and there, but no guarantees that you'd be able to refurb a junkyard tranny to 'rebuilt' condition. SFDon does have used units that he has checked out and verified are good at a cost of about $1500. I saw quotes for getting your transmission rebuilt on posts several years old for $3000.

I could have hunted and posted all over looking for a used shifter platform to replace the one missing from my Gertrag, but since there are various ones for the later cars and only some fit the 265 and the E9, I chose to ask La Jolla to use their experience and source me the new parts that I needed. A couple of their prices were under what I could get from BMW of Monterey.

The speedo drive is the really hard part to find. You can take one from a 4 speed Getrag, not a ZF. Mechanical speedo drives were used up through '81 only. Some later Getrag trannys have the place for it, but blocked off with a freeze plug. Installing it is doable. Carl was able to find me the parts and a seal, for a cost of just over $300. Electronic speedo solutions are a bit more than that, and aren't stock. So I chose to get a stock one while the getting was good.

My 4 speed has a bad bearing, making some noise, but not horribly. Since I'm taking the car apart to fix the rust, now is the time to do the conversion. I was going to see about replacing the bearing on the input shaft, it's commonly available, but the problem bearing might be the smaller roller bearings, and they are NLA, so when I saw the rebuilt unit for sale, I jumped on it. I had a search running on ebay for it, so it was only posted a few hours when I bought it.

I still have some parts to source, but I think they are pretty easily available. There are several good posts about the conversion on this, and some other forums. The search function works well on this site.

For anyone who is interested in ordering parts for the Getrag 265 shift platform, this is the recipe of parts that I recently ordered from La Jolla to let me install my rebuilt 265/6 into my 1970 2800CS. Haven't installed it yet, so I can't say how it works out. I'll let you know.

I tried posting the parts list as text table, but the forum software deleted my extra spaces to make nice columns. So I've attached a text file.

Completed the the dyeing procedures (to MB Bamboo color) on the last rear seat bucket and installed it. Started 'steaming' the foam in the front seat backrests, getting ready to install the upholstery on these made up by my friend at 'Classic 9 Leather Shop in Dearborn MI. His shop re-upholstered the rear buckets in correct design/style, and is now finishing the upholstery of the seat bottoms (having new padding installed in these). Hoping I can get them back for installation in about 2 weeks.

A few days ago, I installed the armrest reinforcement brackets from Coupe King. I thought they were spendy for $50, but after I installed them, there is a solid feeling of confidence that it will endure thousands of door closings, perhaps for another 45 years.
Finally, I had a new( used) windscreen installed by a fine gentleman named Rufino of RJ Automotive Glass in Anaheim, CA. Rufino was so nice he drove down to La Jolla to pick up the windscreen for me since he was going to a classic car show in San Diego with a buddy anyways.:razz: He was referred to me by Jay Mackro, so thanks for the great referral. The windscreen was purchased with the help of Johnathan (Q the genius) and Carl Nelson of La Jolla Independent.