This is how it is mounted to the engine

Wladek said:
This is how it is mounted to the engine
Click to expand...

Thanks! I removed that from my CSI but it has been 2 years. I’ve concluded that I’m going to go-pro my next year down. Not to publish but for reference during assembly.

Some of you saw my thread with bosch windows motors cleaning etc., actually i noticed that motors have tendency to rust inside, so decided to disassemble mine almost to last bolt to eliminate this bad habit, just didn't touched rear wall part as it have one bolt originally bonded to it & there is no possibility to disassemble it without some loss/damage. While assembly parts matching was made, so was no play, scratching or additional noises. Inside regreased with copper grease. While final assembly - blue loctite was used on all bolts. Matching on 5x motors (one is a spare) cost me around 2-3 hours of work, but it was worth it, as motors work very smooth & quietly.

Headlight caps renovation.
If someone is insterested for rebuilding i used transparent glue/sealer (2in1) & bronze/copper 3x12mm rivets.

My god man you are an animal! :eek:

Both headlights washing system motors where disassembled, steel parts where re-zinced, old grease was replaced with fresh one.

Also made a flush of m30 block cooling channels.
It was sick! Now i know why some m30 users have overheating problems.
At first i used flashlight to inspect water cooling channels in block, it looked ok, just some surface rust. So i used pretty mild & safe for cast iron - 25% fosforic acid soak as rust remover (ca. 3 liters), it was 2in1 - rust remover/descaler + inhibitor.
Soaking proces lasted for around 20-24 hours. After that i just drained acid, cast iron from inside became grey instead of brown, some dirt flew out, all as expected.
But then i took the flashlight one more time & at first couldn't understood what was inside of the water channels - layers & layers of something, looked very similar to small sheets of paper. That something was stratified layers of stone that have accumulated on the walls of m30 block over the years (probably previous owner/owners used poor quality coolant or just water).
Anyway i tooked flat screwdriver & started to scrape & dig all that shit. After half an hour of grinding with screwdriver & later next 15 minutes with pressure washer - around 10x times more of that shit you can see on second photo, flew out of the block, really a lot!

After that i started to think what regular coolant system flush can do in 30 minutes? Probably just flush old coolant, nothing more!

Passenger door welding was finally finished so zinc plating was made with some other parts.

Last week i finally disassembled front axle & replaced it with jack frame on wheels. When rear axle will be disassembled & replaced with second part of frame - i plan that each side could change the angle of inclination up to about 30 degree, that will help i think in future body & paint work.
My two car garage is too short for standard rotisserie, due my wife car park in front of e9, so i was little bit limited with lift construction & was forced to made that type of lift.

Bosch wiper arms mounts also came back from chroming, so i could finally assemble them with rest of wipers pieces, some mirror polishing was made.

As usual good work Wladek.....yes you need to acid bath the block to get all the years of crap out of the waterways and then deck the block to make sure everything is square.

This week made disassembly of the heater box, so due fan was out, i decided to take look on fan motor, that actually was stucked (shaft was stucked inside of upper bearing & whole outer part of bearing was rotating instead of shaft itself).
If i remember correctly, there is/was an opinion that this fan motors are not repairable. Not true!
Mine was almost fully disassembled (as you can see on photo's), cleaned, old zinc plated metal case due old zinc wasn't well, same as rotor where painted with primer & black paint, then all was lubricated & reassembled. Now fan work smooth & even pretty quietly.

what did you use to clean turbine blades......warm soapy water? looks good Wladek

CAN WAIT TO SEE IT TOGETHER

paul said:
what did you use to clean turbine blades......warm soapy water? looks good Wladek
Click to expand...

In main cleaning I used "mechanic hand wash paste" (Merida PA33), i use it to wash my hands after engine works etc., it has gel cosistency & is pretty delicate, but very efficient in greasy dirt removing (way more efficient than soap). At first i used it with paint brush, later with sponge, no scratches etc.


aearch said:
CAN WAIT TO SEE IT TOGETHER
Click to expand...

I should have my car sprayed totally end of next week .....will post pics up when done

Some little progress update.
Whole body is currently on the lift frame, rear part was also build & added. As for now didn't made any photo, sorry.

Made rebuild of tank fuel level sender, as sometimes float was stucking somewhere in a middle due deposits and corrosion.
Part was fully disassembled, zinc plated & re-assembled.
Before

When tank is empty - resistance is ca. 150ohm's

Engine block was blasted & primed with VHT engine primer
Photo's of block after blasting & rust converter treat.
Wooden "caps/covers" where made according to the block shape, surface between wood & block all round was sealed with silicone - so abrasive did not get inside.
Covers + silicone made their job, as block after removing the covers, was clean inside. Water pump was also closed, but not so restrictively.
After blasting block was also treated with rust converter as cast iron start to corrode immediately, was pretty warm (around +32C), but first stains showed after couple hours (humidity was around 75%).
Oil filter housing surface still had paper gasket on it, so only oil channel holes blinding was needed.
Later block will be also painted with VHT engine black enamel. 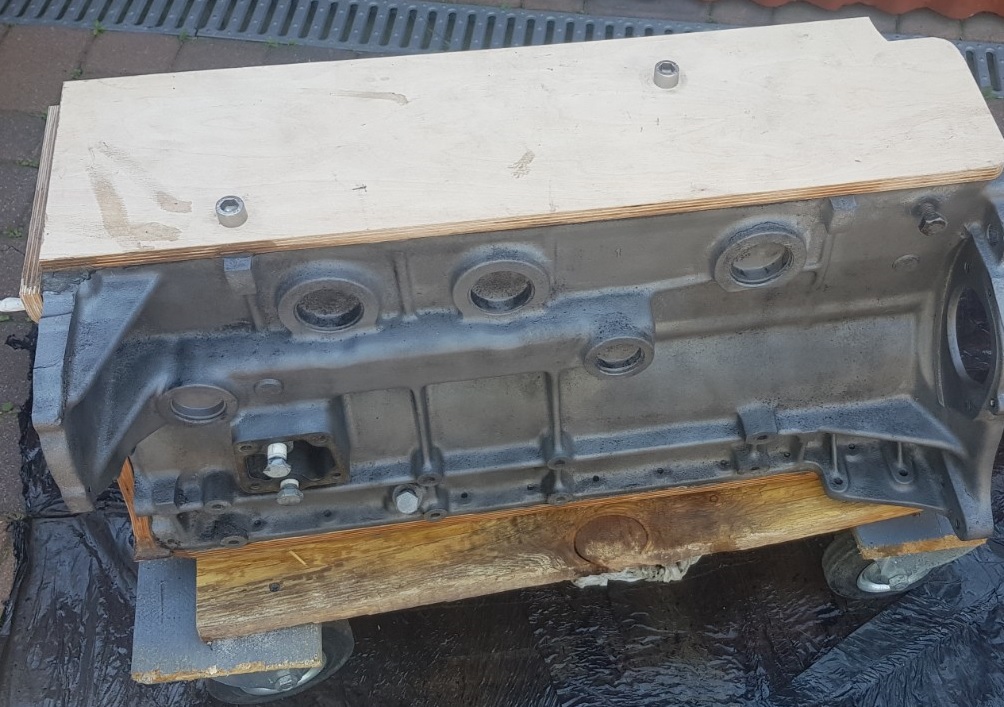 Currently work with heater box, you can see some parts after re-zinc plating:

You are raising the bar even on the "Better than new" concept.

Wladek said:
Made rebuild of tank fuel level sender, as sometimes float was stucking somewhere in a middle due deposits and corrosion.
Part was fully disassembled, zinc plated & re-assembled.

Also, I thought resistance was supposed to be ~3 for full and ~75 for empty. Or am I missing something in the values you're using?

Hi Wladek, that is a very nice zinc plating job, have you considered cadmium plating? I understand that it looks the some but it is more resistance to rust, What is your opinion on this?
Thanks Victor

JayWltrs said:
I am completely amazed anyone could clean a sending unit that badly corroded to like-new condition--excellent work! I am also shamed, because I gave up and bought a new one, and mine wasn't anywhere near that badly corroded.

Also, I thought resistance was supposed to be ~3 for full and ~75 for empty. Or am I missing something in the values you're using?
Click to expand...

I think mostly it wasn't rust, maybe more layered oxydation sort of fuel/air/moisture mixture. That's why it came out pretty nice.
If we talk about resistance, actually my first measuring with multimeter was done wrong, multimeter was in wrong measuring position, second check showed ca. 3 ohm full & ca. 49 ohms empty
I also think that there is a difference in CS vs CSI tank & fuel level senders. Units are slightly different & length is also probably slightly different. Will have to check/compare it with my spare CS level sending unit.

grnder95 said:
Hi Wladek, that is a very nice zinc plating job, have you considered cadmium plating? I understand that it looks the some but it is more resistance to rust, What is your opinion on this?
Thanks Victor
Click to expand...

If you have shop for cadmium plating - go for it. It's slightly more resistant for water/salt water if compare to zinc plating.
Not every shop do cadmium plating, due it's more toxic. My shop do not. But as for me it's not a big issue as most of parts are additionally painted or powder-coated after zinc plating.
Last edited: Jul 7, 2019

Some update,
actually was made a little bit more, but as always didn't made photo's.
Engine block painted (VHT Engine Enamel Black Satin)

Cylinder head came from resurfacing, valves where also machine-fitted
Cylinder head was shaved 0,04mm, still have some oil on the surface, so it might look like dented.

Finally assembled tail light lens, these suckers took me 4 days on both, sick! I thought i will kill myself during this work.
Final result - i can't say that i am very happy, actually it's not my dream, but i think it's anyway better than was before refurb.

Genuine wires that hold plastic parts of middle part vent where rusted, so i replaced them with stainless spring type wire. On the occasion plastic inner parts where cleaned (a lot of dirt).